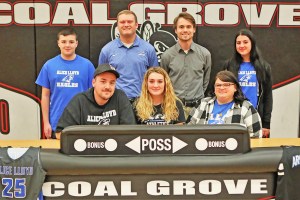 COAL GROVE— Abbey Hicks is a self-admitted addict and has no plans of seeking any help. In fact, she wants to feed her addiction ever more.

But Hicks’ addiction is not to food, drugs or alcohol. She is a basketball junkie.

“I grew up in a gym. My whole family loves basketball. We watch basketball games and I fell in love with it and I’ve done it ever since. Anytime I’m off from basketball, I’m watching a game with my dad, going anywhere just to watch,” said Hicks. 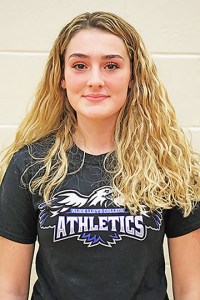 “I’ve played since I was in pre-school. I started doing softball and travel softball, but it just wasn’t for me. Then I got into running and it was mostly just to keep me in shape for basketball, but now I’m doing it (at Alice Lloyd), too,” said Hicks who will run cross country in the fall before taking to the hardcourt.

Faced with being a basketball junkie, Hicks has found a new supplier for his addiction after the Coal Grove Lady Hornets senior guard signed a national letter-of-intent with the Alice Lloyd College Lady Eagles on Monday.

Hicks looked a several schools but had serious talks with Wilmington College before deciding on Alice Lloyd.

“They were a lot more expensive and I just liked Alice Lloyd a lot better,” said Hicks.

The 5-foot-7 senior guard leads the Lady Hornets with a 13.7 scoring average and includes 32 3-point goals.

With Hicks becoming more of a focal point in the Lady Hornets’ offense, she not only has more freedom to shoot but she is also generating more attention from opposing defenses.

“Last year, the main focus was Addi (Dillow) which I would have focused on her, too. She was our leading scorer,” said Hicks. “This year, I’ve seen a lot of box-and-ones which is not very fun to play against but you have to get around it.

“If it’s not in the beginning of the game, after a few quarters they’ll switch it up and have the best defender on me. It’s been different than last year.”

Adjusting to the game will continue next season when Hicks is playing at the college level where there is more talent overall, the speed of the game increases and the competition is greater.

And there are a few other things Hicks sees as greater things that will force even more adjustments.

“And they just changed the 3-point line (which was moved back this season). Adjusting to playing with a new people as well (will be an adjustment).”

However, playing at the next level won’t change how Hicks approaches the game.

“I just want to fit in, play my role and help my team succeed. That’s my biggest goal this year, too. Just play my part and win some games,” she said.

Stepping up her game won’t be a problem for Hicks in terms of work ethic. She went through extra workouts once she hit high school.

“After my freshman year, my dad (Travis) and I started going to the (YMCA) every single day and shooting. My sophomore year is when it really showed and I got to shoot a lot.  Since then, I’ve always been an outside shooter,” said Hicks.

“I went to see them play Saturday and I could see myself playing there. The way they play is a lot similar to the way my high school team plays.”

Besides adjusting to college basketball, Hicks is also preparing to adjust to the academic life at the next level and she began by buying a laptop last month.

“They said they work really well with your schedule. They have a girl doing cross country and basketball and cross country right now and she does fine with it, so they said it shouldn’t be a problem,” said Hicks.

Being a freshman means Hicks will be starting at the bottom of the depth chart and she said the uncertainty of who will be on the roster is an unknown for the sharp-shooting guard.

“It’s hard to tell (who will be on the team) because they don’t know who is coming back as a fifth-year senior,” said Hicks.

“Maddie Ward was a jayvee player but dressed with the varsity. She was scoring a lot and doing really well so she’s been picking up more (varsity) minutes. I’m hoping that’s the way I go in there, too.”

Hicks plans to study towards a dual degree in nursing which allows her to finish her studies at the University of Kentucky.

Ward — who played at Chesapeake — is majoring in a dual degree in nursing and the two are very familiar with each other.

“That’s who I’m rooming with next year. We’ve been friends for a long time,” said Hicks.