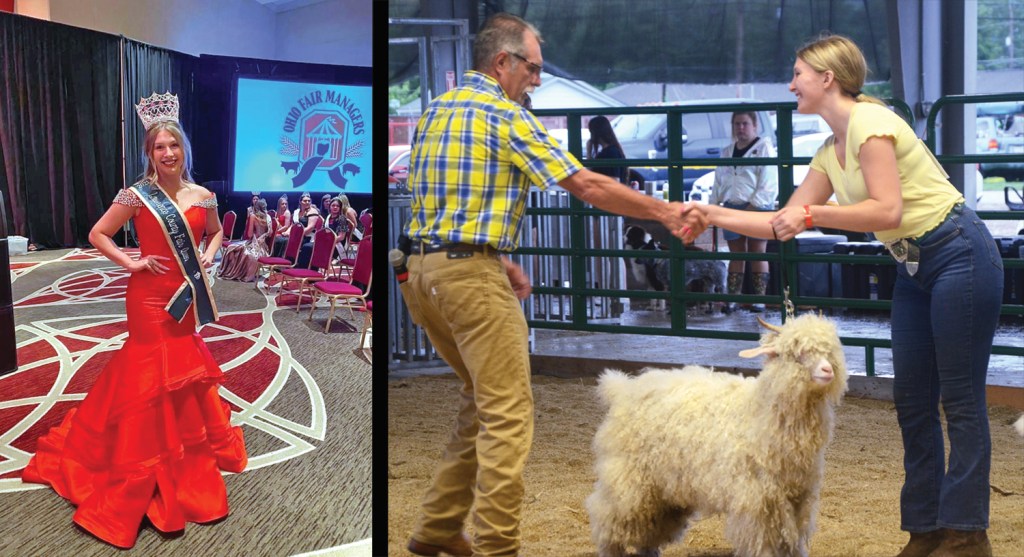 The Lawrence County Fair queen enjoys many opportunities, with one being the chance to run for the Ohio Fairs’ queen.

The winner of the competition will be the queen of all the fairs in Ohio. In Columbus, Maynard participated in interviews and a formal pageant, along with 78 other contestants.

Maynard, a senior at Symmes Valley and a member of the Willow Wood Wranglers 4-H club, is the daughter of Rachel and Josh Maynard.

She started as a Cloverbud in the 4-H program in the third grade and began showing animals at the Lawrence County Fair the year after that. Her wins over the years have included grand champion and senior showman in the 2021 specialty goats competition.

Maynard said she “met so many amazing people, including my roommate for college,” while competing at the Ohio Fair Managers Conference for this title.

“While my run was cut short, I’m still so thankful for the opportunity and I can’t wait to see which queen wins,” she said during the competition.

Lawrence County Fair pageant coordinator Jessi Newman said, “although she wasn’t able to come home with a second tiara, she rocked the one she has already earned and did it with a huge smile on her face. So proud of you, Willow, I hope above all else you take away new memories that you will cherish for years to come.”

Not only did Maynard say she enjoyed the experience and lessons learned that she will carry throughout her lifetime, she said she also walked away with advice and tips from influential women.

“Advice number one: always be yourself without forcing a fake you, and always wear a smile. Advice number two: if you fall on stage, laugh about it too so you don’t feel awkward,” she shared.

She wanted to thank the community for cheering her on during her reign of Lawrence County Queen, and her parents for making sure she was able to be at the competition.

She encourages community members to participate, saying, “if you have any children, grandkids or anyone you know that would be interested in 4-H, please get involved. I would never be where I am today if it wasn’t for the 4-H community.”

Rachael Fraley, extension educator for Lawrence County, said she is “so proud” of Maynard., who also serves on the Junior Fair Board. Fraley said two recent fair queens have also competed at the state level — Montana Runnels, in 2019, and Morgan Klaiber, in 2020.

Among Maynard’s remaining duties as the reigning fair queen for the county will be crowning the 2022 queen at this year’s fair, set for July.

The winner of the Ohio Fairs’ Queen pageant for this year was Maya Kidd, of Butler County. The rest of the top five was comprised of Annabelle Ehmer, of Stark County, Erin Pope, of Gallia County, Gretchen Search, of Ross County, and Nicole Sennig, of Mercer County.