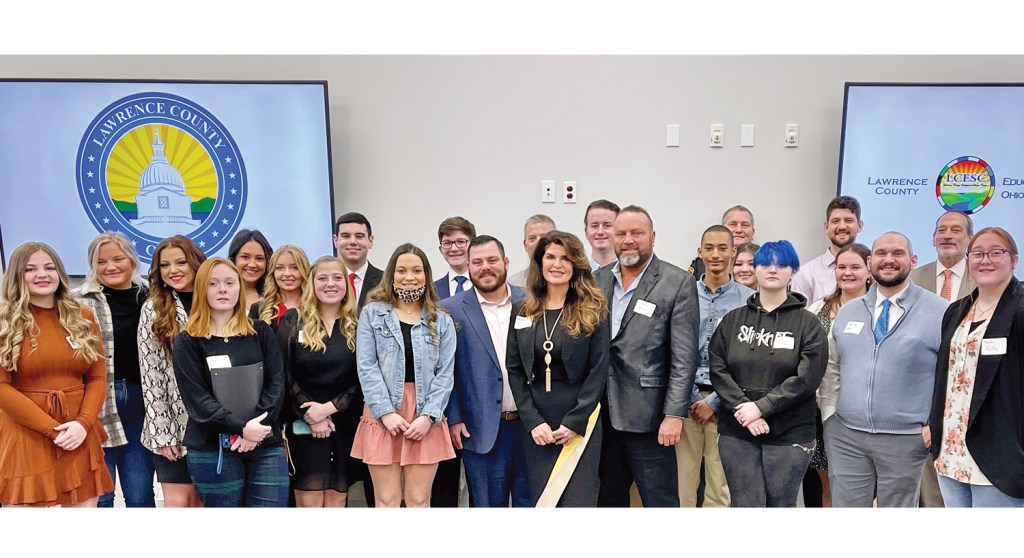 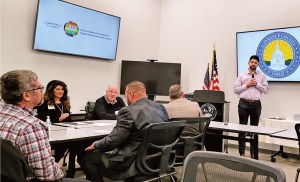 Dylan Bentley, a deputy auditor for Lawrence County, speaks to county officials and students in the Lawrence County Civic Scholars about the program at a reception held at the Joint Response Operations Center in Coal Grove on Tuesday morning. (The Ironton Tribune | Mark Shaffer)

On Tuesday morning, some of the county’s best and brightest students gathered at the Joint Response Operations Center in Coal Grove for a breakfast reception.

They are all part of a fairly new program called the Lawrence County Civic Scholars, in which high schoolers get to learn about how government works and maybe one day become leaders themselves.

Part of the goal of the program is to give these students an opportunity to shadow government officials while they work.

“It is an opportunity for any county high school student, regardless of GPA, to apply and to interview to be part of this program which gives them an opportunity to intern and be mentored by a county official, department heads and offices that they are interested in or they might want to specialize in that they might not otherwise have the chance to,” explained Dylan Bentley, a deputy auditor. “A lot of students, because of their families or who they know, can get these internships, but we wanted to make sure that all county students had an opportunity to thrive and to succeed, and we have some incredible students.”

The program was formed by Bentley, commissioner DeAnna Holliday and Lawrence County Educational Center Service curriculum director Tomi McKnight-Blankenship in the fall of 2020, but until this spring everything had to held virtually because of the COIVD-19 restrictions. The breakfast with the county officials was the first in-person event they all attended as a group.

Bentley said the goal was to keep students in Lawrence County after they graduate.

“We want to make sure we retain them,” Bentley said. “A lot of kids want to leave the area, they feel like they have to. Hopefully, this program will show them they can stay here and thrive and flourish. But mainly it is about giving them the opportunity to succeed.” 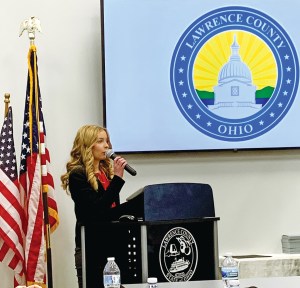 Brea Belville, a senior at Symmes Valley High School, talks about her involvement in the Lawrence County Civic Scholars on Tuesday morning. The program is for any student in the county who wants to learn more about how the government works by doing an internship. (Submitted Photo)

“I’m really interested in the legal system and finances, so I’ve been interested in the auditor’s office and our court system in Lawrence County, so the best way to find a career path was to shadow the judge,” she said, adding she has seen over 150 court cases go through the judicial process so far.

As for what she has gotten out of the program, she thinks it has helped her clarify what job opportunities she’s interested in, and she has gotten to do things she didn’t think she would.

“Our county government is supported by the citizens and this program has allowed the students to have an inside look at how county government works,” she said. “I think by having that better understanding, we are developing future leaders. Some may not have been as engaged in county government, I think they are now.”

Holliday said she loved the fact the school systems shared the same vision that government officials had for the Civic Scholars program.

“This is a great example of what happens when we all get in the same boat and row in the same direction, we have great results.”