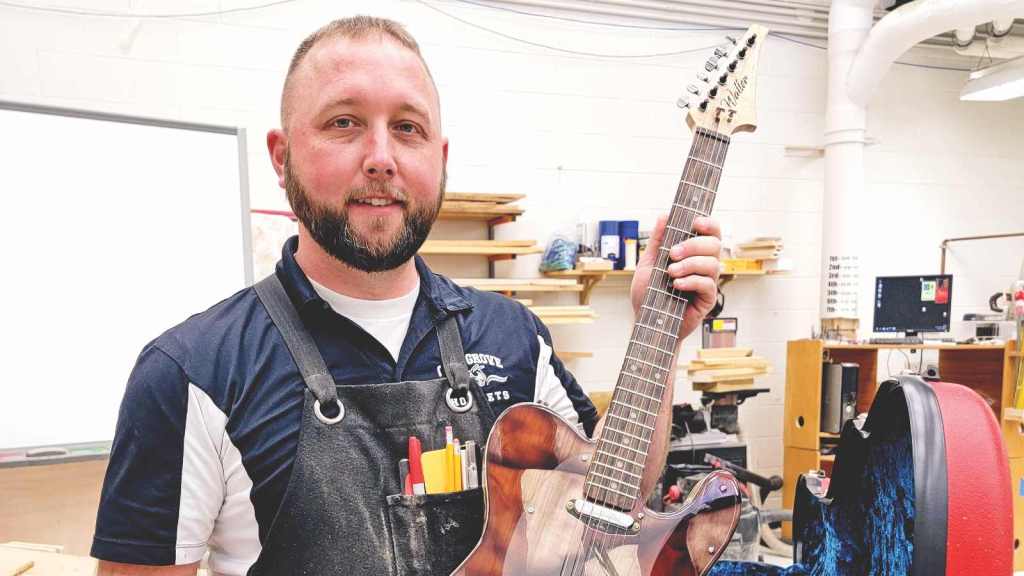 Tyler Waller gets a lot given to his guitar building class at Dawson-Bryant High School so when he was asked to give back, he gladly did.

The technology teacher was asked to build a guitar for the El Hasa Shriners in Ashland, Kentucky, so they could raffle it off and use the funds in their continuing mission to help provide health care for children.

Waller said his guitar building class wouldn’t be possible without people in the guitar industry helping him out.

So, when he was approached by the Shriners about a guitar raffle, he was initially hesitant but then decided it was his turn to give and help others.

“I feel that so many people in the area have donated to my project and my classroom, so it was time for me as a teacher to give back,” Waller said. “They wanted a guitar that they could raffle. I didn’t know it was going to turn into such a big project that it did.”

And to help the Shriners, he turned to others for help.

He partnered with Stewart McDonald, in Athens, who donated some tuners and hardware.

“They are one of the biggest guitar component manufacturers and distributors on the planet,” Waller said. “They were a big proponent of the project. I bought things from them and they gave me all sorts of stuff.”

The guitar was 100 percent designed and built in the classroom by Waller using the same design techniques that he uses in his class.

After the guitar was finished, Waller turned to his friend, Tracy McKenzie, of Extreme Custom Paint, to put some art on the guitar.

“We had an hour-long conversation at his shop and then three weeks later, he sent me a picture. I literally just about fell out of my chair,” Waller said. “It far exceeded the expectations I had set for the project and at that, point it raised the expectations for this project.”

Waller had asked McKenzie to paint the front of the guitar, but when it came back, not only was the front painted, but the back fearured a picture of a Shriner carrying a child with the words “No man stands so tall as when he stoops to help a child.” And so that the future owner would know where the guitar came from, “Dawson-Bryant” was painted on the side as well.

“It is so much more than I thought it would be when I asked him to paint it,” Waller said.

Waller’s plan was to build a guitar that looked and played well and could “make some money for the kids. But after I saw the art, I knew I couldn’t just slack off. So, from that point on, there was no expense spared here.”

The guitar has flame maple for the neck and the body is two pieces of poplar that all came from Harold White Lumber, of Morehead, Kentucky.

The guitar case is a custom job donated by Calton Cases, in Austin, Texas.

“I think they make amazing cases and I got a hold of them and asked them if they would be interested in taking part in the project and they bent over backwards to help me,” Waller said. “This case was specifically designed for this guitar. If I would have had to buy it, it would have been $1,700.”

He said the frets and fret board were fretted by Rodney Crisp in Ashland, Kentucky.

All told, Waller estimates the value of the guitar and case at least $4,000.

“So, at the end of this, $20,000 will be donated to the local Shriners hospital,” Waller said. “It was time for me to give back and hopefully, this will change someone’s life. $20,000 is probably a drop in the bucket when it comes to medical bills, but every little bit helps.”

He said he hopes that this teaches his students a lesson as well.

“I’m showing my kids that this is something that you legitimately can do for a career and also that you can help out in the time of need,” Waller said.