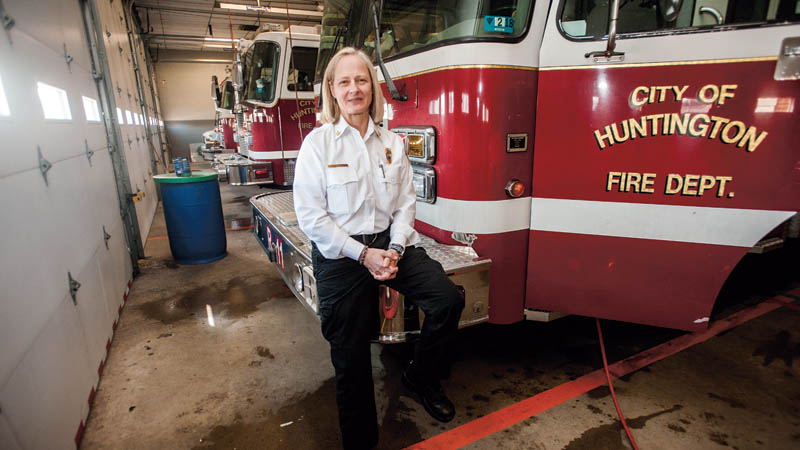 Huntington Fire Department chief Jan Rader has announced that she is retiring in February after 27 years. Rader became one of the faces of first responders fighting the opioid epidemic after being in the Netflix documentary “Heroin(e). (The Ironton Tribune | File photo)

In s statement posted to the city’s Facebook page, Williams said he will announce more details regarding the mission of the Council on Public Health and Drug Control Policy in coming weeks.

“We owe Chief Rader a debt of thanks for her leadership, her heart and her fortitude,” Williams said. “Fortunately, we are not saying goodbye to her. While she may be saying farewell to the fire service, she will continue to assist our efforts in the battle against substance use disorder and the ongoing public health challenges facing our city, state and nation. We aren’t done yet.”

Rader, a native of Ironton and graduate of Ironton High School, has served as a Huntington firefighter for more than 27 years. She was hired in August 1994, named interim fire chief in December 2016 and was sworn in as the permanent chief in March 2017. She was the first woman to serve as chief of a professional fire department in West Virginia.

“I have shed tears, mourned, laughed and rejoiced with both coworkers and citizens during the past 27 years,” Rader said. “The firefighters who guard this community are dedicated first responders and true heroes. I am proud to have served with each one of them and know they will excel moving forward.

Rader’s efforts in combating the addiction epidemic gained her fame nationally. The Netflix documentary “Heroin(e),” in which she appeared, was nominated for an Academy Award in 2018.

“I also can’t thank Mayor Williams enough for his support, leadership and friendship,” Rader said. “He has been instrumental in solving decades-long challenges that have hindered both the Huntington Fire Department and the community as a whole.”

Williams will assemble a citizen-based search committee that will assist him in the selection of a new Huntington Fire chief. The names of the committee members will be announced in the near future.

“The committee members will be trusted individuals who will have the capabilities of vetting fire chief candidates thoroughly and recommending finalists to me whose vision of public safety reflects the needs of our community,” Williams said.