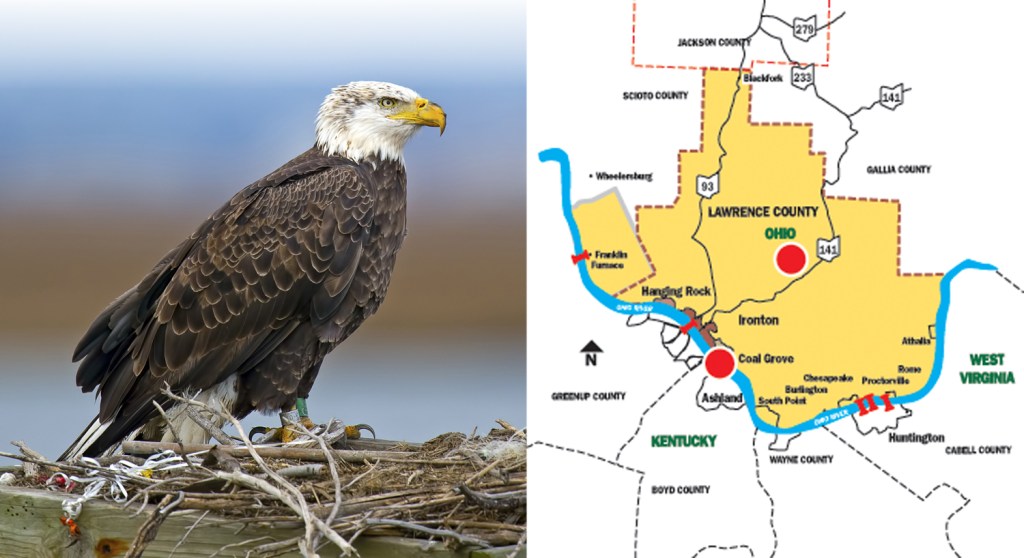 The bird that was chosen to symbolize America is making Lawrence County its home again.

Darin Abbott, the state wildlife officer for the county, has spotted not just one, but two nests built by bald eagles in the past couple of years.

One is at the junction of county roads 8 and 5.

“It’s several hundred yards away from the road. The locals are aware of it, they are actually the ones that called and let me know about it,” Abbot said. “The nest has been there for a couple of years now, it has a nesting pair in it.”

The second is somewhere up in the hill above U.S. 52.

“Its within visual proximity of the Ashland twin bridges,” he said. “I’ve seen them circling right in there, so that means their nest has to be up there in those hills, somewhere in the area of where they are peeling back the hillside.”

So, are those the only two eagle’s nests in Lawrence County?

He said there is an eagle’s nest in West Virginia, right across the Ohio River from Proctorville, not too far from Lot 27 boating and fishing access area, and the birds visit Ohio during their hunts.

“The nest is on private property on Route 2 in West Virginia in this couple’s front yard,” Abbott said. “That pair has been seen in the area of Chesapeake and the Sixth Street bridge multiple times over the past couple of years, looking for food and fishing at the mouth of Symmes Creek.”

Abbott said the eagles are a protected species and he encourages anyone wanting to get a look at the birds to stay away from their nests and not disturb them.

“There is nothing wrong with looking at them with binoculars or a spotting scope from a distance,” he said. “Taking photos of them is okay. We just don’t want people getting right on top of that tree and disturbing that nest, so we can protect the young.”

“We are more concerned about the eagles abandoning the nest before eggs hatch,” Abbott said. “That’s not a problem this time of year, but it always a concern until the young are able to fly.”

And another consideration is that the nests are not on public property.

“It is private property and you would need permission from the property owner to be on that property,” Abbott said. “You can see them pretty good from the road in the daytime.”

Abbott said eagles in this area aren’t as uncommon as they once were.

“We’ve had nesting pairs in this area for a while now,” he said, adding that there are quite a few nests in Scioto County. “Eagles are seen in Lawrence County during the winter months with or without a nest because they are looking for a new home range. Eagle nests are becoming more common in the river counties than they used to be. They have recovered quite well.”

He said the eagles are easy to spot when they are flying because of their immense size.

“They have a seven-foot wingspan and if they are an adult, they have a white head, of course. And if they are on the ground, they stand about three-foot-tall,” Abbott said. Eagles under five years of age don’t have the white head until they mature. “So, they are a blackish brown including their head.”