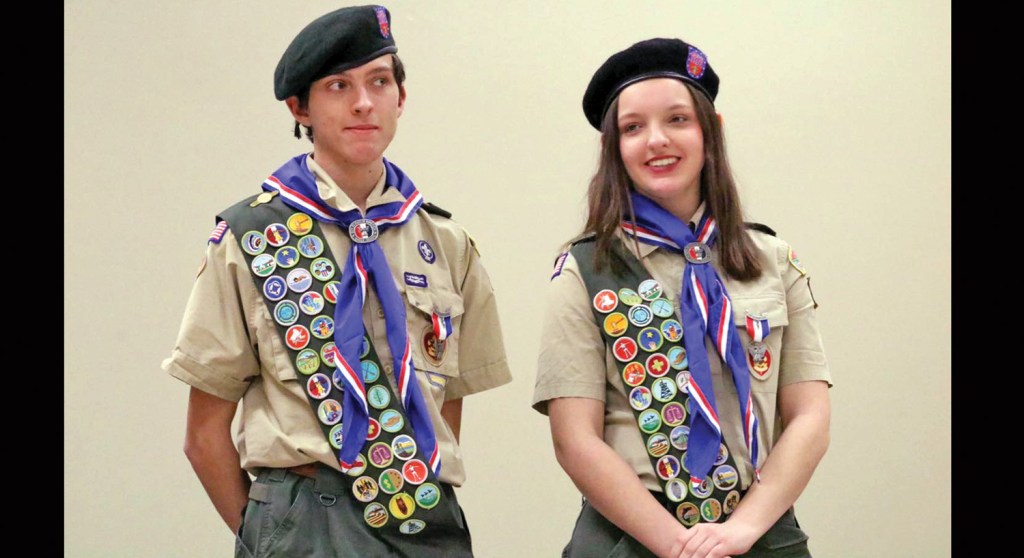 Ben Anderson and Sami Anderson, of BSA Troop 106, of Ironton, were honored attaining the rank of Eagle Scout, during a Jan. 17 ceremony at the Knights of Columbus. They stand as the first set of twins to go Eagle in the BSA Frontier District. (Submitted photo) 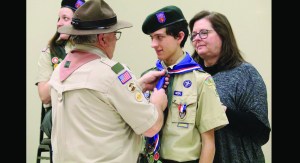 Ben Anderson, of BSA Troop 106, of Ironton, was honored for attaining the rank of Eagle Scout. (Submitted photo)

Only two percent of scouts attain the rank of Eagle Scout, scoutmaster David Lucas, of Ironton’s Troop 106 said, and it is “always exciting” for when that happens, but a ceremony on Jan. 17 was made even more so because of the historic firsts it represented.

Siblings Benjamin D. Anderson and Samantha Anderson, both of Ironton, went before the Court of Honor, where they went Eagle at a ceremony at the Knights of Columbus 3101.

The two went before the Board of Review in October and last week’s event was the public recognition for the achievement, Larry Anderson, their father and an assistant scoutmaster, said.
In order to reach the rank of Eagle, the highest a scout can attain, they must earn 21 merit badges, show scout spirit and demonstrate leadership. 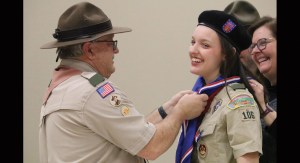 Sami Anderson, of BSA Troop 106, of Ironton, was honored for attaining the rank of Eagle Scout, during a Jan. 17 ceremony at the Knights of Columbus. Along with her brother Ben, they stand as the first set of twins to go Eagle in the BSA Frontier District, while Sami is the first female to go Eagle in the district. (Submitted photo)

Sami has been leader of the girls patrol, while Ben has done so for the boys, Lucas said.

“They went above and beyond,” he said. “It’s all about showing leadership meeting civic challenges. There are a lot of monumental moments here.”

Ben earned 41 Merit Badges and Sami earned 38 Merit Badges. They both served their respective troops in a variety of leadership roles.

“And he did the landscaping around it,” Larry Anderson said.

For Sami’s project, she identified and indexed 950 graves at Sacred Heart Cemetery on Correyville Road in Ironton. 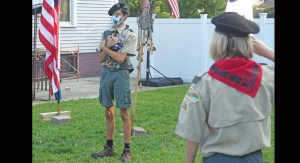 Ben Anderson holds flags that are to be retired at the BSA Troop 106 ceremony in August 2020. Anderson attained the ranking of Life Scout that July. (The Ironton Tribune | Heath Harrison)

“There were no official records before,” he father said, noting that she uploaded them to the website www.billiongraves.com.

Lucas said Ben has “been in scouting since he was a wee boy.”

“And he’s always been faithful,” he said.

He said Sami was the first girl Troop 106 has had, first coming as a “long time tagalong” and then, when changes were made nationally to allow girls into the scouts, she “immediately signed up.” 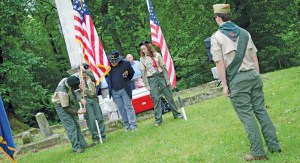 Sami Anderson and members of BSA Troop 106 present the colors at the dedication of Civil War veteran graves in Ironton in May 2021. (The Ironton Tribune | Heath Harrison)

Both Andersons earned the rank of Life Scout in 2020, the highest rank before Eagle.

Lucas said the Andersons were to be recognized by the Lawrence County Commission for their achievements on Tuesday.