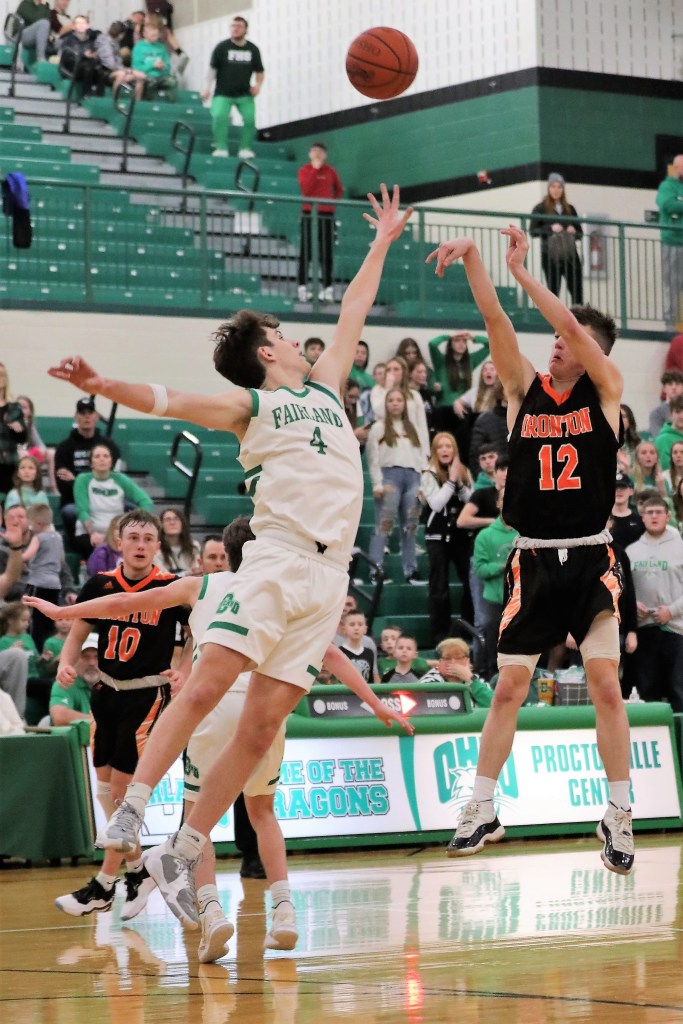 Ironton’s Aaron Masters launches a shot from beyond the arc to tie the game at 55 as the fourth quarter buzzer sounded. The 3 point shot was Masters only points in the game. (Tim Gearhart)

On Saturday night at Fairland, the Ironton Fighting Tigers stunned the Dragons with a 63-61 overtime upset.

It snapped an 11-game losing streak against Fairland.

The teams battled from the opening tip. After the first quarter the score was tied at 19. At halftime Ironton was up by 5. After three it was Fairland on top by 5. And Fairland held a 3-point lead as the clocked ticked down to the final seconds.

A turnover gave Ironton the ball. Aaron Masters took it, stopped at the arc and launched the ball. It swooshed through the net as the buzzer sounded and the game entered overtime with the score tied at 55.

It was the only points Masters had in the game.

In overtime, each team scored 6 points. J.D. Thacker dropped in a pair of free throws and a 2. Steeler Leep added another 2 for Fairland.

Ty Perkins put up a 2-point shot and dropped a pair of free throws for Ironton, while Ethan White had a layup.

Then, with the final seconds of the four-minute bonus period winding down, and the score again tied, this time at 61, Ironton had control of the ball. The Hollywood script writers couldn’t have written a more exciting ending.

After a timeout, Ironton inbounded the ball. Brayden Schreck put up a shot that rolled off the rim. A scramble for the rebound went to White. He went for the put-back. And bam….the shot dropped and the Tigers had won a huge upset. The Ironton fans went wild.

While the outcome dropped Fairland’s record to 14-4 overall and 8-2 in the OVC, it still leaves the Dragons on top of the standings and with a clear path to the league championship.

The win improves Ironton’s record, under first year coach Chris Barnes, to 8-8 overall and 6-4 in the OVC.

Fairland peppered the net with 3s in the first period. Will Davis and Aiden Porter had 2 each while Chase Allen had a single. Davis and Steeler Leep each had a pair of free throws to open the game.

Braden Schreck tossed in a 3 for the Tigers in the first with a 2. Perkins sunk three 2s, Matt Sheridan had 2 and Landen Wilson a single plus a foul shot.

A 12-point second quarter gave Ironton a 31-26 halftime lead. Sheridan stayed hot with a 3, a pair of 2 and one at the line. Schreck and Perkins each added another 2.

Fairland netted 7 points in the second period. Thacker had a pair of 2s and Zion Martin was fouled while shooting under the basket and turned it into a 3-point play at the line.

The Dragons entered the second half with a new burst of energy and outscored Ironton 15-5 to take a 41-36 lead.

Porter, Thacker and Brody Buchannan each netted 5 points in the quarter while limiting Ironton to only 5 – a 3 from Sheridan and two free throws from Perkins.

It was Ironton with the fire in the fourth and the result was another 19-point performance. Sheridan added another 5, including a 3 pointer; Schreck contributed 5 with a free throw and pair of 2s and Perkins added 6, two free throws and a pair of 2s.

And then there was Masters’ buzzer beater 3 point shot to tie the game.

For Fairland Davis put up 5 points, Porter a 3, and Brycen Hunt 6.

Perkins and Sheridan led the Ironton scoring effort with 20 points each. Schreck added 12.

Fairland had 3 players in double figures: Davis with 13, Porter with 14 and Thacker with 12.

Combination of athetics and academics draws Ironton’s Hall to…