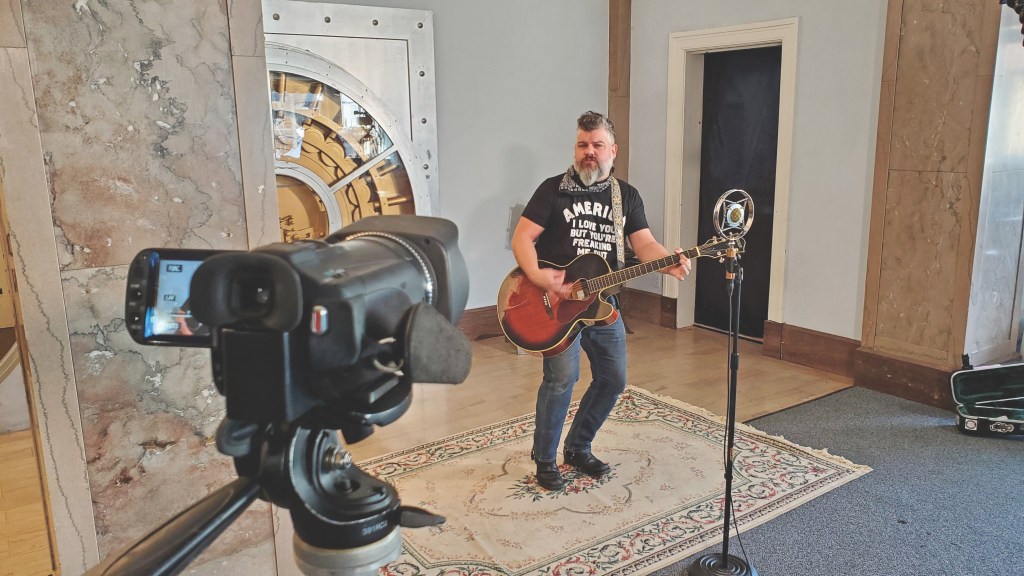 Matt Woods records for the first episode of the fourth season of Press Room Recordings. (Photo courtesy of Shane Finster)

Filming has begun on the new season of Press Room Recordings and viewers can expect those to begin airing in early March.

Shane Finster, with Armstrong Cable, said the series, now in its fourth year, will be working on about 26 new episodes, bringing the total made to 100.

The series, a partnership between Armstrong and The Ironton Tribune, spotlights local and regional musicians, but has drawn visitors from as far away as Alabama and California and features a wide variety of genres of music.

Launching in March 2019 with central Ohio bluegrass band String Therapy, the show has a focus on bluegrass and Americana, but has featured folk blues, Gospel, grunge, alternative, singer/songwriters and metal artists.

“We’re not limited by genre,” Finster said, adding it is open to anyone who is “talented and you write your own music.”

Finster said the third season of the series came about as the pandemic had slowed things the previous year and they decided to be “ambitious” and film a year and a half worth of shows. The last one of that, with MacKenna Hope, set to premiere today at 8 p.m., are still to be released.

After that, there will be a “Best of” period for the interim, then the new fourth season, which will kick off with Matt Woods, from Knoxville, Tennessee, will start airing in the spring and then be spread out through 2022.

The new episodes will have one notable difference, as they will be the first to be filmed in The Ironton Tribune’s new downtown location.

“This presents us with new opportunities for sound, lighting, set builds and artist placement,” Finster said.

He said they are also considering the idea of an outside concert series or event.

Since its launch, Press Room Recordings has won four international Telly Awards, including a Gold award, which Finster said goes to less than five percent of all Telly winners.

Press Room Recordings airs at 8 p.m. on Saturdays on the Armstrong Neighborhood Channel and past episodes can be found on their Youtube page.