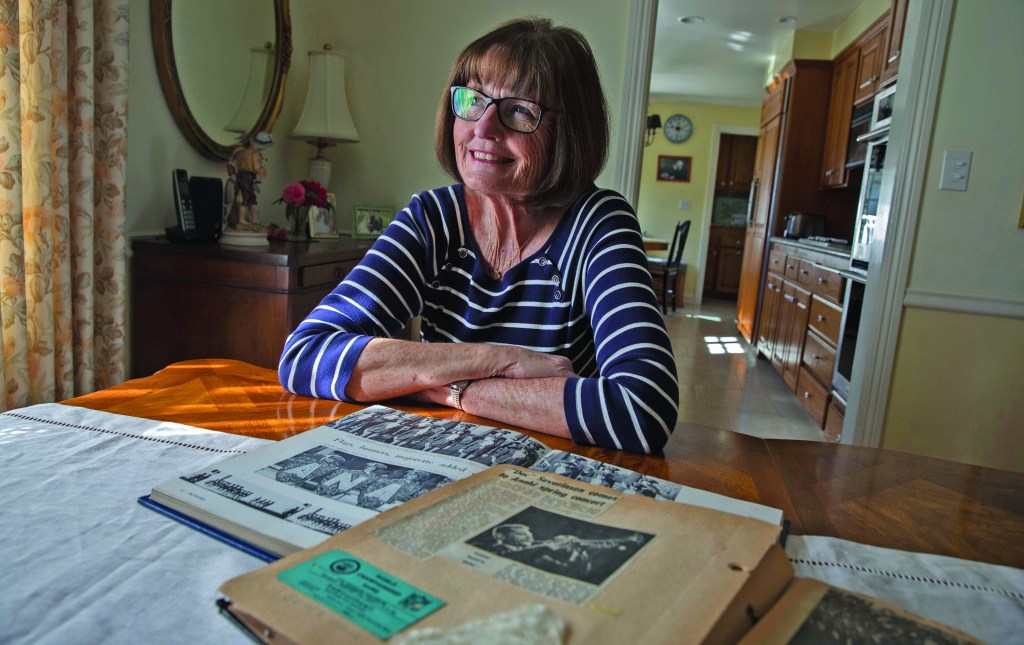 Joanne Hess Mittmann, a member of the Anaheim High School Ana-Hi-Steppers in 1967, shows her scrapbook filled with memorabilia from her halftime participation at Super Bowl I, then called the AFL-NFL World Championship Game, on Feb.6, 2022. She still lives in Anaheim. (Brian van der Brug/Los Angeles Times/TNS)

LOS ANGELES (TNS) — It will happen again Sunday during the Super Bowl halftime show, just as it happens every year, in several dozen living rooms where jaws are about to hit the floor.

A rapt group of fans will be gathered in front of the television watching popular entertainers perform elaborate numbers across a crowded football field when they will be interrupted by a gracefully aging woman who once attended Anaheim High.

She might be their mother, their grandmother, their aunt, maybe a family friend. She could be a retired businesswoman, a longtime homemaker, an expert bingo player. She most definitely will not be Dr. Dre, Snoop Dogg, Kendrick Lamar, Mary J. Blige or Eminem.

She will point to the screen, admire the bling, marvel at the production, then casually drop the hammer.

“I was there in the beginning,” she will say.

“You were what?” they will respond.

“I was part of the halftime show at the first Super Bowl,” she will say.

“No way!” they will shout, and they won’t believe her, they never do, and she will laugh and stroll away fueled by the power of the annual revelation of one of the Super Bowl’s greatest shockers.

The first Super Bowl halftime show at the Coliseum in January 1967 featured 80 unsuspecting girls who had no idea their drill team was marching into the start of one of America’s greatest sports traditions.

Before Beyonce and Bruce Springsteen and Bruno Mars, there were the Ana-Hi-Steppers.

“I tell people I was on the field at the first Super Bowl halftime show and they look at me like I’m crazy,” said Karen Beveridge Claffey, 69, a retired marketing executive living in Reno. “Nobody ever believes you.”

Who would? A space occupied today by the world’s greatest entertainers was once the stage for high school girls in white wigs, tri-corner hats and blue colonial coats?

“I have to keep telling people, ‘It’s true, it’s all true,’ “ said Joanne Hess Mittmann, 70, a retired teacher and businesswoman who still lives two blocks from Anaheim High. “I’m right up there with Justin Timberlake and all the others.”

She is. It’s all true. Yet it’s a tough sell. There are only a few snippets of video. There are few photos. The school’s own 1967 yearbook didn’t mention it. There’s barely any notation on the internet beyond a line on a Wikipedia page, which notes that they appeared with the Grambling State University band, the University of Arizona band, and Al Hirt.

Ask them today, and some of the Ana-Hi-Steppers aren’t even sure who played.

The girls were unpaid. They were given no tickets for their families. They were given no souvenirs or memorabilia other than a participant pass that few have saved in dusty scrapbooks. Most of them didn’t even keep their colonial uniforms, many of which still hang in a storage room at the high school. Other than their lingering memories, few have any evidence they were even there.

“There was no budget, they didn’t give us anything, I don’t even remember if we ate,” said Chris DeHart Ray, 71, a retired business analyst living in Georgia. “I remember marching through the Coliseum tunnel to a drum cadence, they have the best tunnels. But there were empty seats, and I didn’t think it was that big of a game.”

It was all so sweetly simple. After a Saturday night rehearsal, they showed up at Anaheim High that Sunday morning. They climbed onto a couple of school buses. They drove to the Coliseum. They took the field at halftime and joined with the other two bands to form an outline of the United States map. They went back to their seats, some of them flirted with the college musicians, the game ended and they bussed directly to school and carried on with their young lives as if nothing even remotely super had happened.

“It wasn’t like our boyfriends were in the game, so we just didn’t pay that much attention,”  Claffey said. “Then we came home and everybody forgot all about it.”

They were cast by Tommy Walker, a celebrated producer and Disneyland’s former director of entertainment and customer relations. The NFL gave Walker only three weeks to devise a show. His children attended Anaheim High, and he had seen the Ana-Hi-Steppers performing in the neighborhood, so he did the expedient thing and chose them over nationally famous drill teams like the Kilgore College (Texas) Rangerettes.

The Ana-Hi-Steppers won many honors and competitions, but it was still surprising because they were, well, high schoolers whose previous biggest moments occurred in such events as the Arroyo Halftime Competition, the Rosemead Parade, and the Chaffey College Halftime and Parade competition.

“We had won all kinds of awards, so we looked at this like another competition,” Claffey said. “It was like an Anaheim High School football game, only it was at the Coliseum. It would be years before I realized it was anything bigger.”

In fact, the Ana-Hi-Steppers aren’t even the only Colonists to appear in a Super Bowl, as the school has produced three players who were in the big game — coach Jim Fassel, running back Reuben Droughns and offensive guard Gerry Mullins.

“We’re so used to having such fame in so many ways, but when you hear about the Ana-Hi-Steppers, it’s really cool,” said Janet Brown, president of the Anaheim High alumni association. “Every Super Bowl we’re like, ‘Hey, yeah, remember?’ “

To be honest, few outside of the drill team actually remember. There have been no newspaper anniversary stories, no anniversary television reflections, never any mention by the NFL, and no official tribute by the high school itself. Perhaps this is because their achievement was quickly overshadowed by an NFL evolution that has turned a quaint halftime exhibition into edgy performance art.

“It started out as the Ana-Hi-Steppers, now it’s all wardrobe malfunctions and superstars,” Brown said.

Although Anaheim is the only high school drill team to perform in a Super Bowl halftime show, for the first 26 years the show contained some sort of college marching band. Then Michael Jackson appeared in Super Bowl XXVII in Pasadena, and the cute little diversion changed forever.

Janet Jackson’s nipple, Katy Perry’s sharks, a horrific Elvis impersonator named Elvis Presto, the blinking outfits on the Black Eyed Peas … if you ask some of the women from the first Super Bowl, the change has not been for the better.

“It’s quite boring, it’s so ugly, a lot of fanfare but not a lot to it,” Claffey said. “They make a big deal of it, but they overdo it.”

Yet the memories, as fuzzy as they are, still shine. Every year at this time they will return, loudly, shockingly, the gracefully aging women once again taking their place in Super Bowl lore.

“I have no claim to fame … actually, OK, my claim to fame is I have a wonderful husband and he has put up with me for 45 years,” Claffey said. “But we were once football history, and that’s pretty neat, huh?”