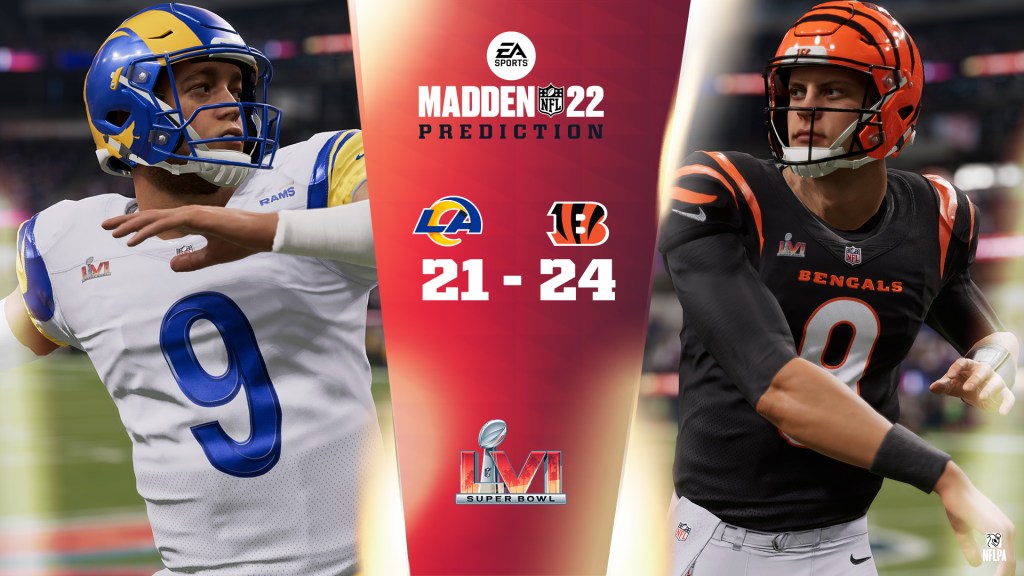 REDWOOD CITY, Calif. (AP) — On Monday, Electronic Arts Inc. released its highly anticipated annual Super Bowl prediction simulated with EA SPORTS™ Madden NFL 22. Led by young superstar quarterback Joe Burrow, the Cincinnati Bengals win a hard-fought victory over the stacked LA Rams, 24-21, delivering the city of Cincinnati its first-ever Super Bowl title. For his leadership and performance on the field, Burrow receives the coveted Super Bowl MVP title in only his second year in the league, making him the first quarterback to win the Heisman, College Football National Championship and Super Bowl. While the Rams come in as heavy favorites with a win-now strategy at their home stadium, the Bengals have momentum on their side.  Check out the full story according to Madden NFL 22 in this new video, featuring NFL legend Marshawn Lynch.

In the prediction, the Bengals enter halftime down 14-7, following touchdowns by Rams running back Sony Michel and red-hot wide receiver Cooper Kupp, with Ja’Marr Chase putting up the Bengals only touchdown. At the start of the second half, the Bengals lock up on defense with cornerback Eli Apple picking off Matthew Stafford and taking it to the house to tie the game. Joe Burrow takes the lead early in the fourth quarter on a touchdown pass to Tee Higgins, but Los Angeles answers with an Odell Beckham Jr. touchdown to level the game. In the final minutes, Burrow gets his team in field goal range creating another opportunity for Evan McPherson to step up and kick the winning field goal to secure a historic victory for the Bengals franchise.

The Madden NFL Super Bowl prediction is one of the most trusted projections ahead of the Super Bowl game and is debated by Madden players, football experts and NFL fans alike. The video game has correctly picked the winner nearly a dozen times and had a near perfect prediction for Super Bowl XLIX. The prediction comes together utilizing the latest gameplay in Madden NFL 22 powered by NFL Next Gen Stats player data.

With Super Bowl loss in the rear, Burrow moves forward