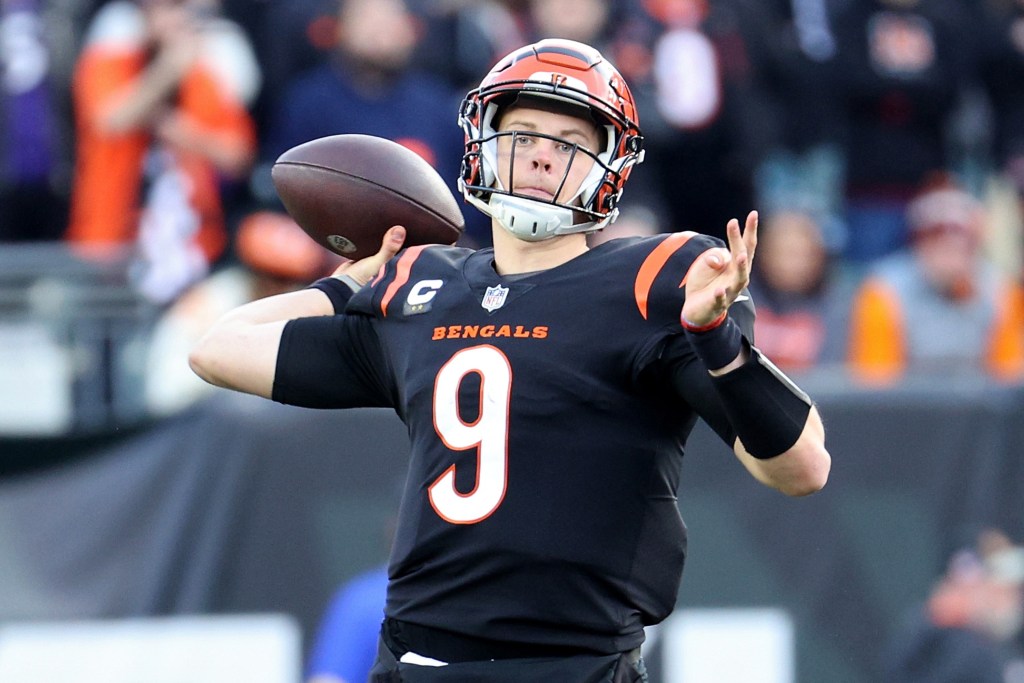 Joe Burrow (9) of the Cincinnati Bengals throws a pass during the fourth quarter against the Baltimore Ravens at Paul Brown Stadium on Dec. 26, 2021 in Cincinnati. (Andy Lyons/Getty Images/TNS)

TNS — In 2015, Joe Burrow was ranked by 247Sports as the nation’s 280th-best prospect and eighth-best dual-threat quarterback. Kyler Murray was No. 1 among dual threats; Jarrett Stidham was No. 2. No. 6 was Jauan Jennings, whom Tennessee turned into a receiver.

Burrow hails from Athens, Ohio, a small town in the southeastern part of the state. His family settled in Athens because his father, Jim, a football coach by trade, took a job as defensive coordinator at Ohio University, not to be confused with THE Ohio State University.

Joe Burrow signed with Ohio State, Columbus being 74 miles away up Highway 33. He redshirted as a freshman. He spent his sophomore and junior seasons backing up J.T. Barrett. As a fourth-year junior, Burrow would have been behind Dwayne Haskins. Having already graduated, Burrow was free to play immediately as a grad transfer.

Haskins finished second in 2018 Heisman Trophy voting; Murray won the trophy. Burrow, who chose LSU over Cincinnati as his next destination, led the Tigers to a 10-3 season, in which they beat Auburn, Georgia and Central Florida. He finished 65th in passing efficiency. Tua Tagovailoa of Alabama was first; Haskins was fourth, Georgia’s Jake Fromm fifth.

LSU was slow to catch the throwing bug. Burrow threw 369 passes for 16 touchdowns as a junior; at Ohio State, Haskins threw 533 for 50. Over the offseason, coach Ed Orgeron decided his Tigers needed to throw it more and better. He hired Joe Brady, a 29-year-old who’d been an offensive assistant under Sean Payton with the Saints.

Brady was named passing-game coordinator. The difference showed from the start. In the opener against Georgia Southern, Burrow threw five touchdown passes. Against Texas the next week, he passed for 471 yards. Over the first four games of 2019, Burrow passed for more touchdowns than in the 13-game 2018 season.

By November, we were witnessing the unprecedented. Burrow threw for 393 yards in a massive victory over No. 1 Alabama in Tuscaloosa. His regular season ended with LSU unbeaten and Burrow the landslide choice for the Heisman. Then he got even better.

Burrow threw for 348 yards and four touchdowns in a 37-10 victory over No. 4 Georgia for the SEC title; for 493 yards and seven first-half touchdowns in beating No. 4 Oklahoma 63-28 in the Chick-fil-A Peach Bowl semifinal; for 463 yards and six touchdowns in the 42-25 dismissal of No. 3 Clemson for the national championship. His postseason numbers: 1,304 yards, 17 touchdowns, no interceptions.

That run capped the greatest season by any collegian ever. It boosted Burrow from being a Day 3 NFL draftee to the top of Round 1. He was taken by Cincinnati, which last won a playoff game in 1991, five years before Burrow was born. He tore his ACL as a rookie. In his second pro season, he has lifted the AFC’s No. 4 seed to the Super Bowl. The Bengals upset the Titans in Nashville. They rallied from 18 points down to outdo Patrick Mahomes in Kansas City.

Take away Burrow and rookie Ja’Marr Chase — Burrow’s chief LSU target already is among the NFL’s finest receivers — and the Bengals are nothing special. Football Outsiders ranks the AFC champ the NFL’s 15th-best team. The more-balanced Rams should win the Super Bowl. If Burrow’s on your side, though, you’ve got a shot. (If not … well, Orgeron was pushed aside by LSU last fall. Brady was fired as Carolina’s offensive coordinator.)

Maybe all this would have happened had Burrow stayed at Ohio State. Probably not. On the day after Christmas in 2019, I asked if transfers had reached the saturation point. “Like too many transfers?” Burrow said.

Yes, I said. His response: “Here’s what I always say: ‘Would you rather see me, Justin and Jalen not playing somewhere, the three Heisman finalists that have been three of the best in the country this year?’ If we didn’t transfer, we could be on the bench right now. … There’s a lot of talented players across the country who just needed the opportunity.”

Rout by Bengals exposed a Bills team that may be regressing