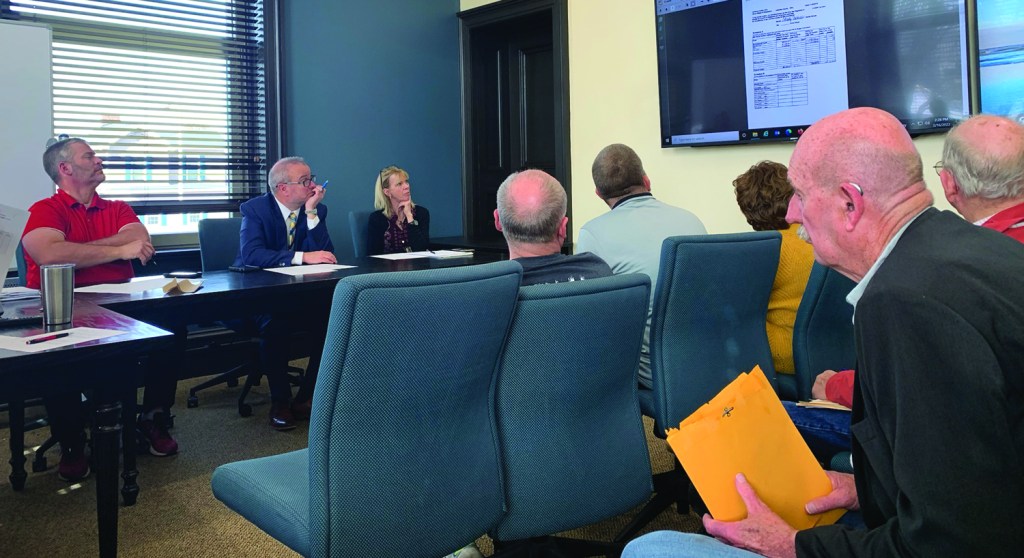 The Lawrence County Budget Commission met on Tuesday and a large portion of the meeting dealt with discussing the lack of financial filings from the Village of Chesapeake.

Griffin, Blake and Henson were appointed to the council by Mayor Nate Ittig in November, to fill vacancies created when the majority of the council abruptly resigned along with previous Mayor Kim Oldaker at October’s meeting of council.

This left the council with only two members, Hart and Ittig. Ittig became acting mayor, then mayor and filled all five council vacancies, including his own. Jacob Wells and Katie Bentley, who were also appointed, were not present at Tuesday’s meeting, nor was Ittig.

Also resigning in October was village fiscal officer Lennie Abrams, unrelated to Oldaker’s resignation. Hart said Abrams cited being overworked as his reason for stepping down.

Abrams was hired back as interim fiscal officer in November, in order to prepare the village for audit from the Ohio Auditor of State for the years 2019, 2020 and 2021. Abrams had served as fiscal officer for one year under Oldaker, following the resignation of Theresa Lawless from the position.

Abrams has since resigned from the interim position, in January, and the council confirmed Jonathan Ascensio to the permanent position at February’s meeting.

Knipp opened the meeting by stating that no budget items from Chesapeake had been filed for calendar years 2021 and 2022 and that they had no correspondence from Abrams.

Griffin, who serves as mayor pro tempore, led the discussion from Chesapeake (as Ittig was out of town) and said that hearing there was no correspondence from Abrams was “alarming” to him.

“Because we were told he was in communication with you guys,” Griffin said.

Kline said they had sent emails to Abrams and had repeatedly been told “I’ll get back to you.”

“You’re doing better than I get out of him,” Griffin said. “I don’t get a phone call returned or a text returned.”

Knipp said he had reached out to Abrams when he was first hired.

“He inherited what, in my vision was a mess,” Knipp said. “I told him to contact Chris.”

Griffin said he was initially told by Abrams that “everything was supposedly done and ready turn in, but now everything’s a mess.”

“That’s the last correspondence I got, that it was a mess,” Griffin said. “Now we have to take what he had and start from scratch.”

Griffin said the council has received “a little information here and there” from Abrams, but that there has been “no transparency.”

“This is a huge issue and has us in a financial crisis,” Griffin said. “If he would get us information on the last several years, we can get information to you.”

Griffin said the council has had to table some matters due to uncertainty on finances.

Knipp recounted his efforts to get information from Chesapeake.

“We’ve reached out and sent letters,” he said. “This has gone on so long, we’re on the potential line here.”

Knipp said some local government funds were withheld from Chesapeake because of the issue.

Griffin said the council is eager to work with the budget commission, but they “have been “getting the same lack of correspondence.”

“We cant even get invoices to put in our packets,” Griffin said. “Our W2s were done incorrectly. They weren’t postmarked until the end of January.”

Smith then stated he had not received his until Feb. 14 and that it had discrepancies.

Griffin said the matter has “been a continued snowball effect of issues.”

“We want to get it in,” he said. “It’s been our concern since November, when we were appointed. But it’s been one excuse after another.”

He said Abrams had been working with the new fiscal officer and helping to make a transition, but now the council “all want him out immediately.”

Griffin and Blake said, at this point, they felt Abrams was “just lingering around.”
Kline advised them that if Abrams was no longer a village employee that they should get their equipment back from him that was being used to work from home, that Abrams’ name should be taken off bank accounts and that all passwords for programs should be changed.

“That’s all stuff we thought of,” Griffin said, and agreed that they would do so.

Baker advised them that training is available from the state auditor for the new fiscal officer.

“The sooner he gets started, the better,” she said.

Kline said the council should speak with the village solicitors for further advice on the matter.

“They should be the ones guiding you through what you’re supposed to be doing,” he said.

“You’ve got to get your house of cards in order to make a reasonable guess going forward,” Kline said. “And explain that you’re in consultation with the budget commission.”

Baker said she “feels certain” that LGS would assist Chesapeake.

“They want you to be successful,” she said.

Griffin asked the budget commission for a list of everything that they needed and said the council members and the village would keep correspondence with them and he said they would “definitely reach out” to LGS.

“We inherited a mess,” he said. “But we have to find a solution to these problems.”

Following the meeting with Chesapeake officials, which lasted about 45 minutes, the budget commission met with a representative from Decatur Township to also discuss a lack of filings with the commission.