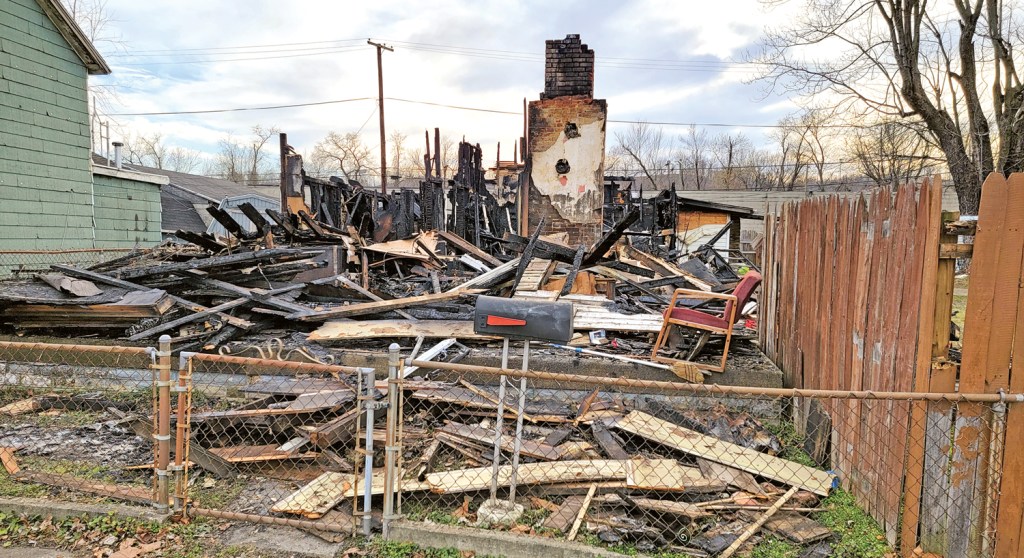 The remains of 1308 First Avenue in Ironton which burned down on Saturday morning. Homeowner Kenny Delawder said he hopes to rebuild since it has been in his family for two generations. (Ironton Tribune | Mark Shaffer)

The Ironton Fire Department had a busy weekend with two fires in two days.

On Saturday morning, there was a fire at 1308 First Avenue.

“It was a total loss,” he said. “When we arrived, flames were already coming through the roof. It was pretty much fully involved. Our main goal was to protect the house next door and we did that.”

The home’s owner, Kenny Delawder, credited his wife’s oldest son for letting them know about the fire so the family could get out in time.

“He heard a ‘pop!’ and it woke him up. When he came out of the room, he saw the smoke and the fire and he got his mother and his brother out,” Delawder said.

Delawder wasn’t home at the time of the fire, he was up the street checking on his mother who is bedfast right now. “By the time I got back, the living room was already engulfed. I just about went in there to fight it, but I knew better.”

He blames a small heating unit for the fire.

“It’s one of those that has the fake fire on it,” Delawder explained. “That’s what set it up. And those 30-mile-an-hour winds didn’t help matters either. I’m just glad it didn’t get my neighbor’s house. It would have, if they hadn’t kept the water on it.”

Despite the total loss of the house, Delawder was philosophic about the fire.

“Anything can be replaced except for yourself and your family,” he said.

Delawder said they have started to clean up the property and then will see if the city will allow him to rebuild on the site because the house has been in the family for two generations.

“I just have to look to the future,” he said. “We are going to clean it up and see what the city will let us do with it. I’d love to be able to rebuild, but I don’t know what their policy is. We’ll see.”

A second fire happened at an apartment at 315 Vernon St.

“There was minimal damage, they had to pull out some of the ceiling,” Thomas said. “I think there was a short circuit in a light that caused the fire. It wasn’t too bad, just one apartment. No injuries.”

There was a report of a third fire that turned out to be false.

Thomas said that someone called in on Sunday with a report of a fully-engulfed trailer fire at the Sta-Tan Trailer Park, but when firefighters responded, there was no fire.

Music and dance movement from around the world