Crowd comes out for info on Chesapeake Bypass 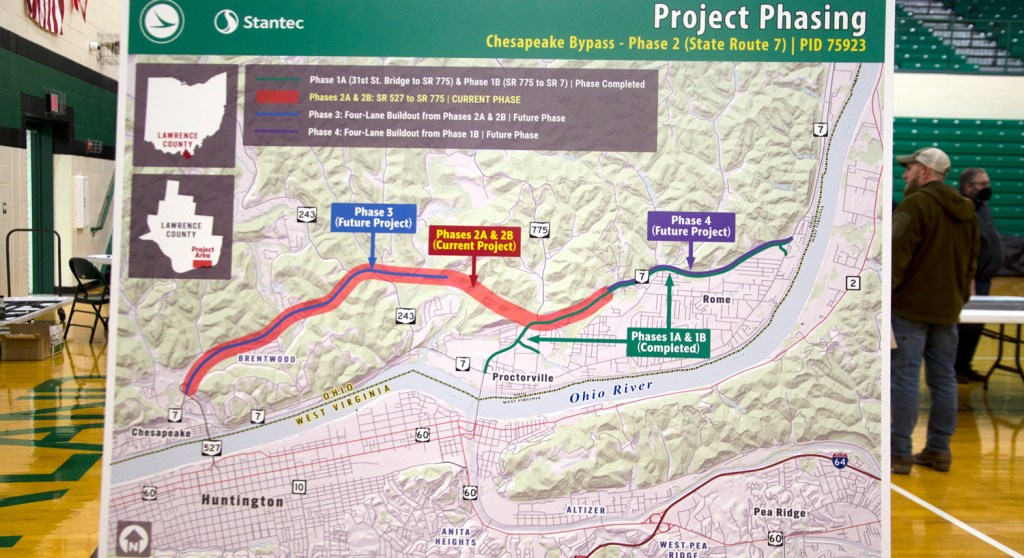 Phase 2 of the Chesapeake Bypass, shown here in red, is expected to be completed by 2029 or 2030. (The Ironton Tribune | Heath Harrison) 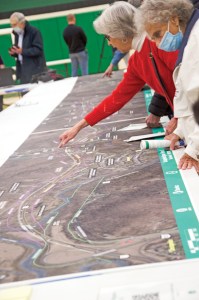 Attendees look over maps of the planned Phase 2 of the Chesapeake Bypass at an informational open house hosted by the Ohio Department of Transportation at Fairland High School on Wednesday. (The Ironton Tribune | Heath Harrison)

ROME TOWNSHIP — The Ohio Department of Transportation hosted an open house on Wednesday to provide information to the public on the second phase of the Chesapeake Bypass project.

Turnout was high for the event, which took place at Fairland High School, and ODOT public information officer for District 9, Matt McGuire, said it was the most-attended informational event he’s seen since taking the job 2 1/2 years ago.

The crowd filed into the school’s gymnasium, where maps and other displays were set up over a series of tables.

There, ODOT staff talked to members of the public one-on-one about the plans and answered questions.
The Chesapeake Bypass, which has been ongoing for 20 years, is being completed in phases due to limited funding.

“We are here to update citizens of Lawrence County on the current status of the Chesapeake Bypass project,” McGuire said. “And specifically concerning Phase 2, which is construction of 5.2 miles of new roadway between the current four lane terminus of State Route 7 (The 6th Street Bridge) that will connect to Proctorville at the state routes 7 and 775, the 31 St. Bridge, in that area.”

McGuire said Phase 2 would be done in two sub phases and a timetable exists toward its completion.

“We’ll spend the next two years finalizing right-of-way acquisitions, renewing environmental surveys and finishing detailed design work,” he said. “Tentatively, in 2024, we would look to begin construction on earthwork.”

He described Phase 2 as a “Super 2,” a two–lane road that would include features normally associated with a 4-lane highway.

“Truck climbing lanes and features like that,” McGuire said.

Phase 3 would include construction of the remaining westbound lanes to complete a four-lane highway from Chesapeake to Proctorville, while Phase 4 would expand the highway around Rome Township, connecting State Route 7 and State Route 775, to four lanes.

As for the overall completion of the four-phase project, McGuire said a timetable has not been set and funding is not committed yet.

Phase 1 of the project, which included sections from the 31st Street Bridge connecting Proctorville and Huntington, as well as a two-lane road around Rome Township, was opened to traffic in 2006.

McGuire said funding has been the biggest cause for the delay in completion.

“It’s been a very challenging project that has been talked about for a long time,” he said. “There are a lot of challenges involved in funding the project.”

“You’re talking a lot of money,” he said. “But we think it’s money that is well spent and invested here in Lawrence County. It’s a roadway, again, that citizens have been looking for, for some time. We believe it’s going to bring a lot of new access, economic development and lots of improvements to the transportation network here in Lawrence County.”

McGuire said they were also taking public comments at the events and, for those who were not able to attend or those who wanted to provide comment later, all materials shown on Wednesday are available online at www.publicinput.com/N4602, where comments can also be submitted.