PEDRO — It would seem there is a huge difference between first and 1,000. But those numbers were linked together on Friday for Ailah Dorofeev. 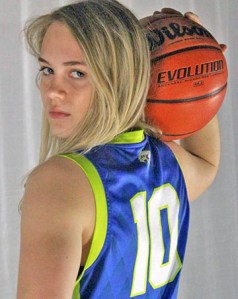 The Sugar Creek Christian Academy Lady Eagles senior registered both numbers and both were milestones as she led her team to a 55-37 over the Hillsboro Crusaders.

Dorofeev reached the milestone of 1,000 career points and added another honor by becoming the first player in SCCA history to accumulate 1,000 points.

The Lady Eagles jumped in front 26-8 with a relentless pressure defense and balanced scoring.

Chloe Long had 4 points and 2 steals in the quarter, Charlee Long came away with 3 steals, Zika Dorofeev hit a pair of jump shots while Ariella Vititoe added another jumper.

Ailah Dorofeev had 10 points in the quarter as she creeped to within a point of the milestone.

“She had no idea she was even close and it was nerve racking watching her get closer and closer,” said Lady Eagles coach Andy Long.

As the second quarter began, Ailah Dorofeev got a rebound and drove the length of the floor and stopped, then took a step-back 20-footer that gave her both milestones.

“After she hit the shot, she was running back down the floor and Chloe (Long) tried to hug her and she told her to get on her man. She had no idea,” said coach Long.

Dorofeev ended the game with 21 points and the added honor of the school’s all-time leading scorer.