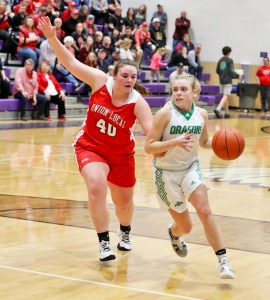 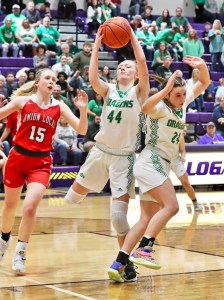 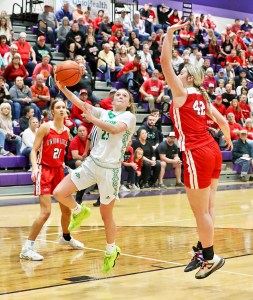 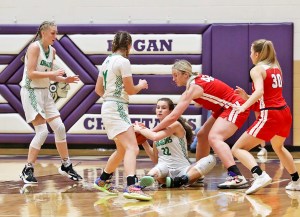 Fairland Lady Dragons’ Bree Allen (22) sits one the floor to get the basketball and tris to keep it from the Belmont Union Local Lady Jets’ center Reagan Vinskovich (42) during Saturday’s Division 3 regional championship. (Photo by Tim Gearhart)

LOGAN — Basketball is a game of highs and lows, ups and downs, a physical and emotional rollercoaster.

And it was never more prevalent than the girls’ Division 3 regional championship game on Saturday.

In a game that continually toyed with the the emotions of players, coaches and fans, the Union Local Lady Jets  finished with a strong run in the fourth quarter to edge the Fairland Lady Dragons 69-67.

Union Local (25-3) led the entire first half and by as much as 19 points. But just when it appeared that Fairland was doomed, the Lady Dragons made like the Phoenix and rose from the ashes and took a lead in the third quarter.

The fourth quarter was  a see-saw battle with Fairland teasing everyone with an effort to pull away only to have Union Local keep scratching and clawing its way back into contention.

And then the final seconds were the perfect climax to this story, but only if you were a Lady Jets fan.

But Torre Kildow converted a 3-point play and then made a layup followed by Kiera Gregor’s layup and the Lady Jets were down just 63-62 with 3:25 to play.

Now it was Fairland’s turn once again to get the emotional high going as Hinkle and bruce made layups and it was 67-62.

Reagan Vinskovich followed up her own miss and Kildow hit a 3-pointer from the top of the key as Union Local tied the game with 1:12 to play.

Then came a key play.

Hinkle was called for a charged and the Lady Jets took advantage.

Kildow put a driving layup shot that rolled around and around the rim only to fall out onto the floor. A scramble ensued but the Lady Jets managed to grab the ball off the floor and feed Vinskovich who made a layup with 8 seconds to play and it was 69-67.

Vinskovich was fouled on the play but missed the free throw and Fairland got the rebound.

Fairland set up for a game-tying play but Kamryn Barnitz layup bounced off the side of the rim and Kildow grabbed the rebound as the clock hit zero.

The first half didn’t hint that the game would be close until the final minutes.

Union Local used three straight baskets by Vinskovich to take a 6-0 lead to start the game.

Fairland (25-3) got 3-pointers from Reece Barnitz, Kamryn Barnitz and Hinkle in the quarter and trailed 14-9 before Kildow hit a driving short jumper, Emily Kellaway knocked down a 3-pointer and Kildow had back-to-back layups for a 23-9 lead at the end of the quarter.

Kellaway had a steal and fed Kildow for a layup and it was 25-9 to start the second quarter.

But Kylee Bruce banked in a 15-footer, Kamryn Barnitz had a layup, Hinkle got a layup and Allen came up with a steal and hit a 15-footer as Fairland got within 25-15.

The Lady Jets threatened to blow the game wide open as Kildow hit a 3-pointer and a layup, Vinskovich had a layup and Kildow’s triple gave the Lady Jets their biggest lead at 40-19 with 2:14 left in the half.

After a free throw by Hinkle, Allen took over with a long 3-pointer and then a longer 3-pointer and two foul shots with 8 seconds to go in the half as Fairland cut the deficit to 40-30.

And now for the third quarter as Fairland stayed hot and caused Union Local to start reeling.

Allen’s two free throws began the quarter but Hannah Merritt hit a 3-pointer for the Lady Jets and things were still calm.

Allen hit another trey but Lauren Miller scored for Union Logan and it was 45-35.

Gregor made a layup to end the turn but Kamryn Barnitz hit another trifecta and Hinkle’s two free throws with 41 seconds left in the quarter put Fairland ahead 53-47.

Union Local was only 3-of-12 from the field in the quarter.

And that brings us to the afore mentioned fourth quarter and the game’s dramatic end.

The Lady Dragons had four players in double figures as Bruce and Kamryn Barnitz scored 17 each with Barnitz hitting five 3-pointers. Hinkle had 16 points and Bruce 14.

The state bound Lady Jets were led by Kidlow with a game-high 29 points including 13 in the pivotal fourth quarter. Kinskovich scored 20 points with 12 coming in the first quarter.