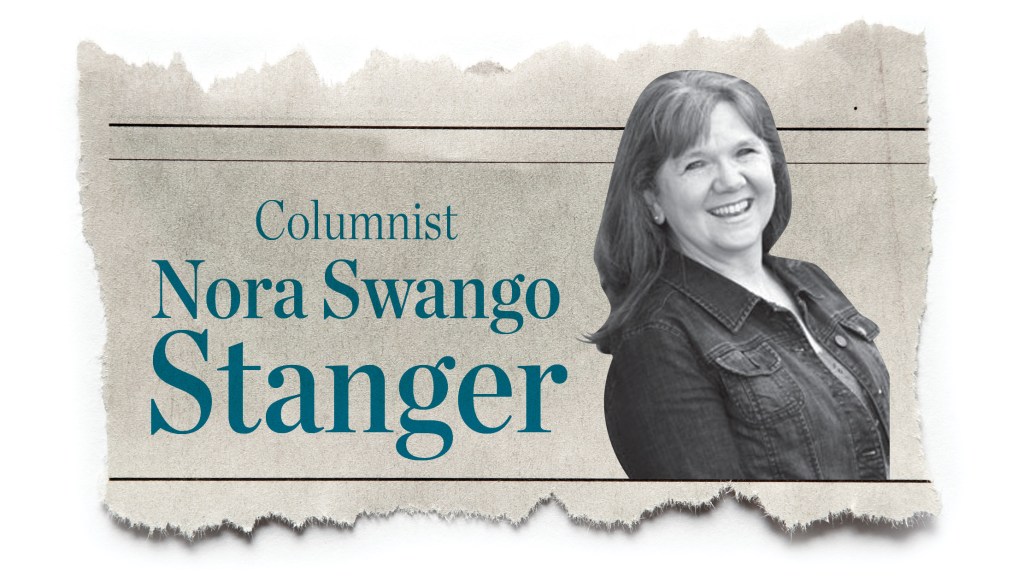 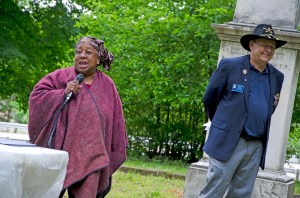 Omope´ Carter-Daboiku, an Ironton native who now lives in Dayton, speaks at a dedication ceremony for two Ironton veterans of the 27th United States Colored Infantry in the Civil War at W.D. Kelly Cemetery in May 2021. (The Ironton Tribune | Heath Harrison)

This week, I and a gathering of about 20 people will be immersing ourselves into the history and culture of Lawrence County.
This venture is a dream come true for me. How often do you set aside time to better understand your personal history and to consider the people who were here before you, who made it possible for you to live the life you now have?

Omope Carter-Daboiku will guide us through history and current issues of our home community. Omope is a wordsmith, international storyteller, culture keeper and Appalachian scholar. An overall keeper of the past, she introduced me to facts I never knew about my home area.

An Appalachian of mixed ancestry, Omope Carter Daboiku was born here in Ironton and graduated from Ironton High in 1970. After two years at Ohio State, she migrated to Cincinnati in 1972 and has lived in Dayton since 2012.

A cultural geographer and award-winning teller of tales, Omope became affiliated with the Ohio Arts Council in 1990 and with the Cincinnati Arts Association’s “Artists on Tour” since its inception in 1997; she has performed for hundreds of libraries, museums, schools and cultural organizations across the U.S. and abroad.

In 1993, she spoke at The Art of Survival conference (Nuremberg, Germany), addressing quilting as a cottage industry used by African-American women to support families. In 2008, the U.S. State Department chose her for a 14-day, seven-city tour of Turkey as part of the Adana Consulate’s English Proficiency Program. Her company, Homeside Human Academy, specializes in writing arts-based, culturally relevant academic curriculum that supports land-based identity and Earth Wisdom.

Inducted into Quill & Scroll Journalism honorary as Copy Editor of the 1970 HIS Owl, Omope’s contemporary writing appears in the Southern Appalachian Writers Collective’s journal Pine Mountain Sand and Gravel; and in both Frank X Walker and Nikki Giovanni editions of Shepherd University’s Anthology of Appalachian Writers, where her first published short-story, “The Power of Water Baptism” was nominated for the prestigious small-press Pushcart Prize in 2014.

Her grassroots work in health, nutrition and foodways is documented in several small press cookbooks; and, “History Keeper,” a personal memoir about place and identity produced at a NPS Network to Freedom digital storytelling workshop, is available on YouTube.

Her most recent work includes a six-month residency for Muse Machine (Dayton) with sixth and seventh graders. Working with over 100 students, Mama O (as the kids called her) massaged anxiety into performance excellence, wordsmithing their writing into class scripts; then, along with mentor Eric Aviles of NYC-based Ping Chong & Co, staged the work for a public performance presented to a standing room only audience.

Realigning her past with her present, Mama O also works with urban agriculture, helping third generation migrants reclaim their agricultural heritage. As a Agraria Regenerative Farming Fellow (Yellow Springs) and manager of the Central State Extension Incubator Farm at Edgemont Solar Garden, she shares the growing, preservation and herbal knowledge gained from her ancestors and lived experience on the Appalachian landscape.

Omope also serves as a Core+ Steward for the Urban Appalachian Community Coalition and cast member of “Express Appalachia” – an UACC initiative on cultural identity, volunteers for the National Park Service at poet PL Dunbar’s historic home. She is the VP of the Ohio Storytelling Network, and holds membership in both the Association for the Study of African American Life & History and the Appalachian Studies Association.

Lawrence County has birthed generations of strong citizens who impact the world around us for good. This week we will get to take a more personal look at some of those influencers. Hopefully we can build on their work before us and make them proud of the way we choose to live in their legacy.

Feel free to sample some of our rich history by joining us on at 7 p.m. on Tuesday in the Bowman Auditorium of Ohio University’s campus in Ironton. At that time Omope will share a bit of her history keeper skills and Dr. Dave Lucas will speak on The Mystery of Lawrence County’s Underground Railroad History.

Nora Swango Stanger, a Lawrence County native and Appalachian outreach coordinator for Sinclair Community College, can be reached at norastanger@gmail.com.