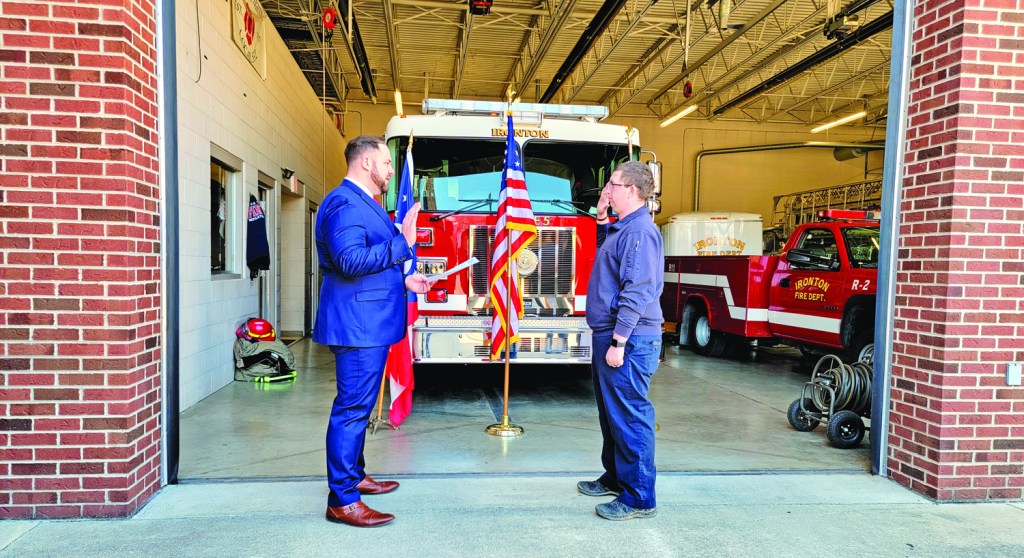 The Ironton Fire Department swore in its newest firefighter on Tuesday morning.

Derek Howell, 25, took his oath in front of the fire department.

He is from McDermott and brings experience to the job, since he spent the past four years working at a Paint Creek Joint EMS and Fire District in Highland County.

He got interested in the field because of his father, Brian Howell.

“My dad has been a firefighter for over 30 years, he started in 1989,” Howell said. “I watched him growing up and I actually started in the volunteer service and grew my career into a full-time firefighter.”

He was happy to be accepted at the IFD so he could move back to the area.

“I know the guys up here, so I look forward to be here and running with some people that are from where I’m from,” Howell said. “When I was at Paint Creek, it was all-new people in an all-new place. I look forward to serving the citizens of Ironton.”

His first shift was on Unit 2 on Thursday.

IFD Chief Michael Mahlmeister said the department has had a lot of turnover in the past few months after having same crews staffing the station for the last 7–8 years.

“We’ve had retirements and one resignation of a guy who wanted to move on to greener pastures,” he said. “It’s a changing of the guard, so to speak. We are bringing in some new youngsters and moving on with the future.”

Mahlmeister said Howell brings experience and youth to the department.

“He may bring in new ideas. We are open to new ideas and he brings a breath of fresh air to the department,” he said.