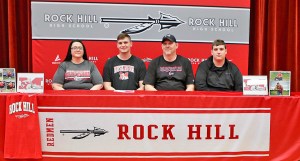 PEDRO — Lane Smith has always had some sport on his plate, whether is was football, basketball, baseball or track.

But next fall, Smith plans a steady diet of track. 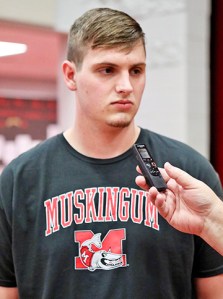 The Rock Hill Redmen senior shot and discus thrower will be a one-sport man after signing a letter-of-intent to play for the Muskingum College Fighting Muskies.

Smith said he looked around at some small schools as he searched for the right place to continue playing track.

“It’s always been my favorite. It’s something I felt I’ve always gotten better at consistently and didn’t have to plateau for a bit and then work extremely hard to get back to it,” said Smith.

An all-district lineman in football and center on the basketball team, Smith said a steady of diet of one sport will be an advantage at the next level.

“I think it’ll be nice. I think I can actually get better at one sport instead of having to worry getting ready for one sport while focusing on another,” Smith said.

Smith is uncertain what his chances are when he steps up to the next level, especially since the college shot put is 16 pounds as opposed to the 12-pound high school shot.

Although it will be an adjustment going from the high school level to college, Smith said it’s a similar adjustment to his younger years.

“It’ll be pretty tough, but I think I can do it. It’s not the first time I’ve had to do a switch. Middle to to high school is a big switch with weight, so I think I’ll be fine,” said Smith.

“I’ll just have to be in the weight room a lot more and getting ready for it.”

The 6-foot-3, 240-pounder said he’s had a lot memories during his career but points to the Ohio Valley Conference track title in 2019 as sitting atop the list.

“I’ve had a bunch, but I think just being able to win the OVC with a bunch of these guys during my freshman year was special,” said Smith.

He added that through all his years that there have been a lot of people who have helped him and been great influences.

“Definitely, I’ve had a bunch. Obviously, my parents and I’ve had a bunch of great coaches who have helped me through it and get better at it, not just the sport I’m doing but all of them,” he said.

Smith plans to major in geology.