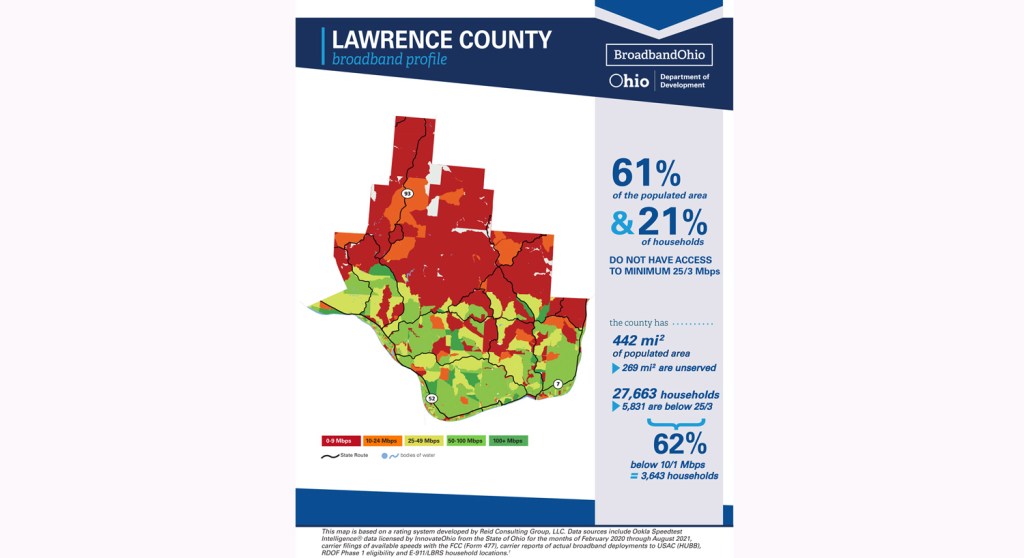 COLUMBUS — Ohio Lt. Gov. Jon Husted announced on Tuesday that BroadbandOhio has published a new mapping resource tool on their website that more accurately shows how many of the state’s households are connected to high-speed internet, providing a clearer, more detailed picture of Ohio’s broadband availability gaps.
A statewide map along with profiles on each of the 88 counties can be found at Broadband.Ohio.Gov.Broadband Maps.

The maps use on-the-ground Ookla Speedtest Intelligence records from a 15-month period to measure four different internet speeds: under 10 Mbps; under 25 Mbps; under 50 Mbps; and 50-100 plus Mbps.

Whereas the FCC Fixed Broadband Deployment Data from FCC 477 maps only uses data that is reported through internet service providers, this new map uses real-world, on-the-ground speed test information from actual internet customers to determine where there are gaps in coverage. The new maps will be used as a supplement to other currently available data, helping to provide more information to BroadbandOhio; Ohio citizens; local, state and federal officials; internet service providers; and other stakeholders.

“As Gov. Mike DeWine and I continue work to expand broadband so that every Ohioan can be a part of the modern economy, healthcare system and education system, understanding where there are gaps is key,” Husted said. “The new mapping resource launched today is driven by customer data and will help us better pinpoint where we need to focus our funding, attention and efforts.”

The county broadband profile maps created for each of the 88 counties will be helpful as local governments consider utilization of different funding resources and opportunities for public-private partnerships to help close connectivity gaps in their region. A better representation of Ohio’s broadband landscape will also help when applying for state and federal grants.

“These maps bring us one step closer to solving the digital divide in Ohio,” Lydia Mihalik, director of the Ohio Department of Development, said. “The additional detail will help us target areas with the greatest need to connect all Ohioans with critical resources, new economic opportunities, and an improved quality of life.”