Learning the history of home 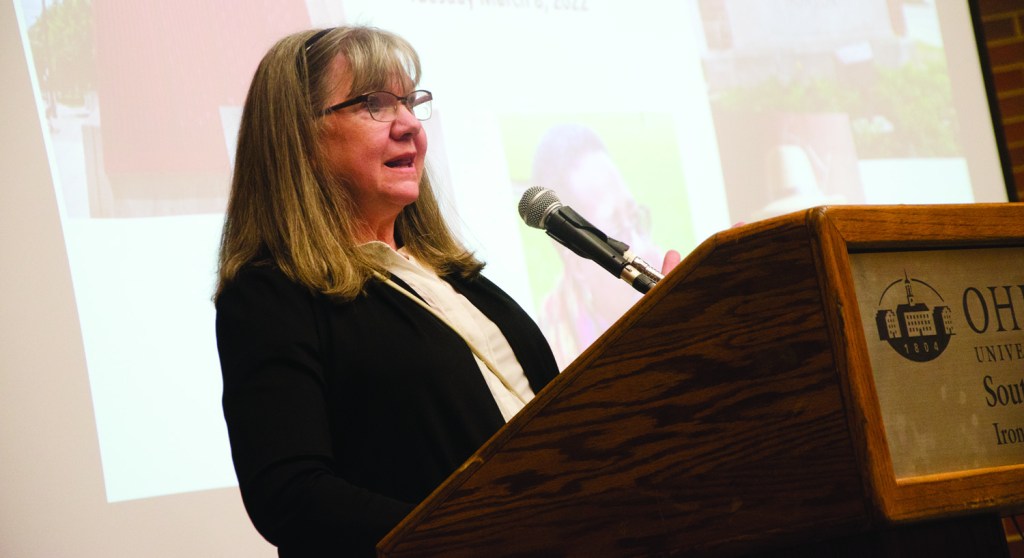 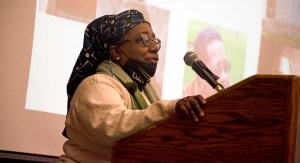 Two accomplished Lawrence County natives spent this week in Ironton, sharing the history of the area with a group of students.

Stanger said it was through Daboiku, who also lives in the Dayton area, that she has been learning the history of how those who were enslaved escaped through Lawrence County to freedom.

Their visit culminated on Tuesday night with an event at Ohio University Southern, where the Bowman Auditorium was filled.

Stanger thanked the crowd for coming and said she was pleased with the strong turnout. In addition to the Sinclair students, who were comprised of those with Appalachian heritage and some who were unfamiliar with the region, the audience also included a group of students invited by Dr. David Lucas from Mountwest Community and Technical College in Huntington, West Virginia, as well as many from the public in Lawrence County. 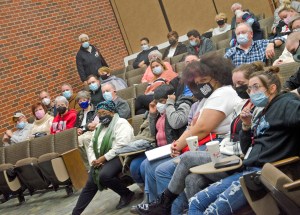 The Bowman Auditorium was full, with both local attendees and students from Sinclair Community College, for Wednesday’s event. (The Ironton Tribune | Heath Harrison)

Stanger said her career has been dedicated to promoting the value of the region and helping those who come from it to overcome stereotypes.

“I’m from listening to whip-poor-wills on hot summer nights and bobwhites calls in the morning,” she said relating her experience growing up in the county. “I’m from working in burley tobacco and cleaning off abandoned cemeteries for Decoration Day.”

Stanger said of home that “once you leave, you realize what you had.”

“Don’t take it for granted,” she said. “And it is time for this place to show what it has.”

She said we need to teach the “richness and beauty of who we are” and to learn of the region’s “heritage, strength and resilience.”

Daboiku, a cultural geographer and award-winning storyteller who has performed across the U.S. and internationally, followed Stanger at the podium.

She said it was during her time in Ironton that she decided that she wanted to be a writer, an aspiration that was sometimes met with laughs.

She recalled, years later, when she was invited by the U.S. State Department to do a 14-day tour of Turkey, what she thought of the naysayers.

“When I woke up that morning on the other side of the world. I put my finger in my ears and,” she said, then blowing a raspberry.

As part of her presentation, she played a video recounting her family’s history, particularly that of her father, Douglas Clayton Carter, as well as the Black history of the area, including the

Burlington 37, a group freed from slavery who settled in Lawrence County.

Daboiku told the crowd to “never forget where you come from.”

She thanked those in attendance “for helping me be who I am.”

The bulk of the evening was given to Lucas, who delivered a presentation, “The Mystery of Lawrence County’s Underground Railroad History.” 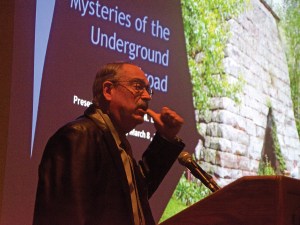 Lucas opened with the story of Elijah, a man who fled slavery south of the Ohio. He swam the body of water, no small feat in those days, Lucas said, as there were no locks and dams.

“It was wide, thick and murky,” he said, noting that Elijah ended up in Ironton.

But he said, upon arriving, he was told to go north, as people hunting those who escaped slavery would follow and cross the river.

It was through a network of safehouses and routes to the north that they made their way to freedom.

Lucas spoke of John Campbell, the founder of Ironton, whom he described as devout abolitionist, influenced heavily by the Rev, John Rankin, a preacher from Ohio who was one of the most active “conductors” of the Underground Railroad.

Known nationally, Rankin died in Ironton and his funeral took place in the front room of the home that is now the Lawrence County Museum.

Lucas said that “terms are important,” when discussing the subject.

He also urged against those who try to excuse the institution of slavery.

“Don’t say ‘times were different then,’” he said. “There has never been a time it was right to own another human being.”

Lucas showed photos of several sites in the county, including tunnels and areas in the woods where campsites were kept by those on their journey.

He concluded by having the audience read the names of families and individuals from the region who were vital to the Underground Railroad.

“They deserve to be remembered,” he said.

Following Lucas’s presentation Daboiku said of the abolitionist history of the area, “It may not be as well-know as our football legacy, but we can make it be.”

She said she was giving the audience “homework” and asking them to share with at least one other person what they had learned that night.

Stanger closed the event, telling all in attendance to remember a few takeaways from the event.

“Education is a requirement, not an option,” she said. “And you were created for a purpose, and that purpose is good.”