The Minnesota Twins emerged from the lockout with a pressing need for starting pitching.

Prices are as steep as ever: Getting Sonny Gray from the Cincinnati Reds cost the Twins most recent first-round draft pick. 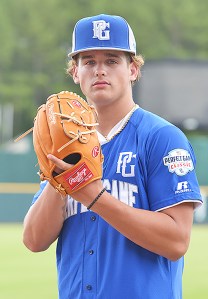 The Twins took their first significant step toward restocking their rotation on Sunday, acquiring the right-hander Gray on Sunday in a trade that sent pitching prospect Chase Petty to the Reds. The Reds included minor league right-hander Francis Peguero in the deal for Petty, who was the 26th overall selection as a high-schooler last summer.

“We’re excited about his future, but the ability to access someone like Sonny Gray, who we think pitches at the top of the rotation for anybody, it’s very unique,” Twins president of baseball operations Derek Falvey said. “We think this is a guy who really establishes an anchor in our rotation, a guy that young players can look up to and someone we think is really going to lead us.”

“He’s got great stuff,” Falvey said. “But beyond that, just the way he competes every time he goes on the mound, that just adds a level of pushing him up a notch in a rotation.”

Entering the final guaranteed season of the deal he signed with the Reds to complete a trade from the Yankees in 2019, Gray will make a little more than $10 million. The Twins hold a $12 million club option for 2023 that can escalate based on his innings total this year and conveniently comes without a buyout. Gray was one of the most obvious and valuable trade chips for Cincinnati, coming off a so-so 83-79 season.

The Reds have begun a bit of a reset, having already lost starting pitcher Wade Miley via waivers to the Chicago Cubs and traded catcher Tucker Barnhart.

Gray will slot right in at the top of Minnesota’s rotation, which was ravaged last year by the trade of José Berríos and the elbow injury to Kenta Maeda that will keep him out for most or all of 2022. Michael Pineda became a free agent and could re-sign if the price is right.

Otherwise, behind Gray, the Twins have Bailey Ober and Joe Ryan coming off promising rookie seasons, Randy Dobnak recovering from an injury-spoiled 2021 and reclamation project Dylan Bundy, who was signed as a free agent right before the lockout. There are promising prospects like Jordan Balazovic, Simeon Woods Richardson, Jhoan Duran, Josh Winder and Matt Canterino behind them, but they’re not likely to be deemed ready to break camp with the team, particularly after an abbreviated spring training.

The Twins were quiet in the weeks before the lockout began, with a seven-year, $100 million contract extension for center fielder Byron Buxton their only significant move. Bundy, who signed for one year and $5 million, is still the only major league free agent the Twins have added.

They acquired shortstop Isiah Kiner-Falefa and a minor-league pitcher in a trade with Texas on Saturday, sending catcher Mitch Garver to the Rangers in exchange.

The 24-year-old Peguero, a native of the Dominican Republic, was signed as an international free agent by the Reds in 2017. He spent the 2021 season as a reliever for High-A affiliate Dayton, posting a 4.96 ERA in 28 appearances.

The 18-year-old Petty was selected by the Twins last summer out of Mainland Regional High School in Linwood, New Jersey. The right-handed Petty appeared in two minor league games last season after signing with the Twins for a $2.5 million bonus, forgoing his college commitment to Florida.

“It was a lot better competition, obviously, coming from high school baseball, especially from New Jersey baseball. It was definitely a big difference. But it was fun. I really enjoyed it. All the guys here are very supportive of you. You all have the same goals and aspirations,” Petty said last month after reporting to Twins camp, which he was allowed to do because he’s not required yet to be placed on the organization’s 40-man roster.