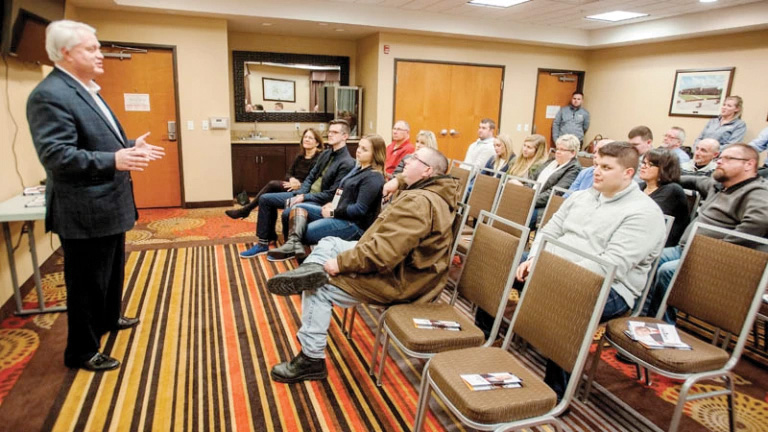 Businessman Mike Gibbons speaks at the Holiday Inn in Ironton in 2018 during an earlier campaign for office. The Republican candidate is leading in his party’s field in two recent polls for the 2022 U.S. Senate campaign in Ohio. (The Ironton Tribune | File photo | Jessica St. James)

The crowded race for the Republican Senate nomination has shifted somewhat in recent polling, with Cleveland businessman Mike Gibbons taking the lead in two recent polls.

A FOX News poll, taken from March 2-6, had Gibbons in the lead with 22 percent of voters, followed by the former frontrunner, former Ohio Treasurer Josh Mandel at 20 percent. Venture capitalist and Hillbilly Elegy author J.D. Vance was in third, with 11 percent, former Ohio Republican Party chair Jane Timken was fourth, with 9 percent, and State Sen. Matt Dolan was fifth, with 7 percent.

The survey showed room for further shifts in the field, with 24 percent of voters undecided.

The survey was taken from 918 Republican voters and has a margin of error of +/- 3 percent.

Gibbons’ lead, within the margin of error, comes after the candidate began a large television advertising campaign in the state. An investment banker and founder of Brown Gibbons Lang & Company, he previously ran for his party’s nomination, unsuccessfully, in 2018, to challenge U.S. Sen. Sherrod Brown, D-Ohio.

Gibbons also led in an Emerson College poll, taken from Feb. 25-26, with 22 percent. Mandel came in second, at 15 percent, Vance third, with 8 percent, followed by Timken and Dolan, with 6 percent each. 39 percent of voters were undecided.

The candidates are running to fill the seat being vacated by U.S. Sen. Rob Portman, R-Ohio, who is retiring after two terms. Portman endorsed Timken in the race last month.