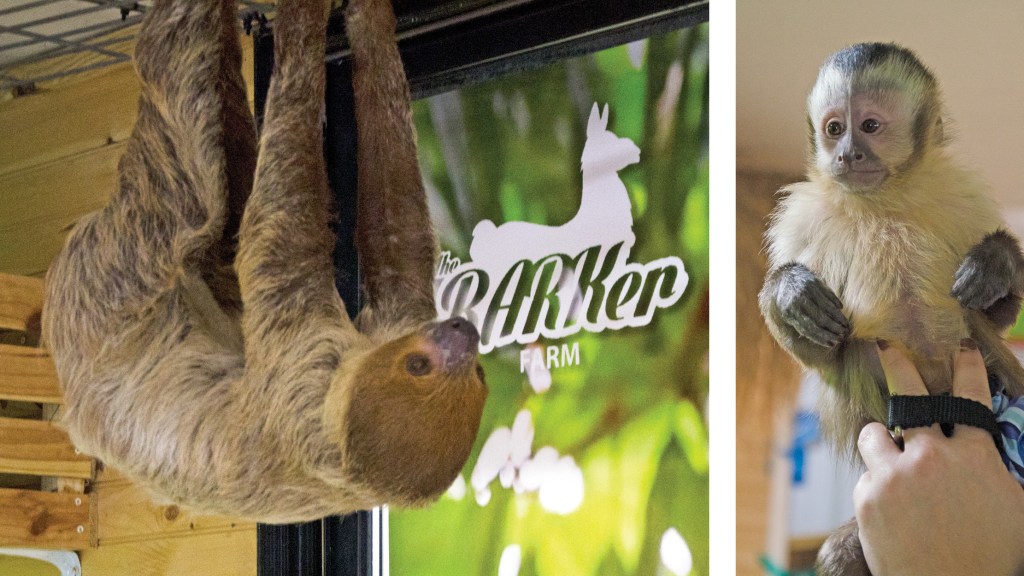 For more than a decade, Kate and Tony Barker ran the BARKer shop in downtown Ironton, a pet grooming business. Then their love of animals led them to acquire enough to start the BARKer Farm and Petting Zoo, which launched in 2018 and became their primary business.

It was such a large endeavor, they left the shop and now devote themselves to providing animal experiences to the region.

She said the change to a full time zoo has paid off for them.

“It’s been great,” she said. “We’ve had opportunities to do things we weren’t able to do before.”

She said it has been a great step for the family, allowing them do more events in the community, particularly at schools.

“We do a lot of schools, locally and in places like Gallipolis and Rio Grande,” she said.

Things were beginning to take off for them in the first year, but then the COVID-19 pandemic hit the following March, and Gov. Mike DeWine’s limits on public gatherings and the closure of schools in Ohio put a pause on the kinds of crowd events where they thrived.

Kate said they were able to adapt to the change.

“We took it a different route,” she said, noting that they began offering private visits to their farm, something they have kept going, even as things reopened.

The farm has 30 different species, ranging from reptiles to primates.

Some of their recent additions have been Clint, an armadillo, Miles, a hedgehog, Ellie, a prairie dog, and Simon Cow, a seven-month-old miniature highlands cow. They have also acquired tortoises, an iguana, a chameleon, parrots, tarantulas and more.

They recently got a second African crested porcupine, Ken, to go with Barbie, who they have had since 2019, and a second camel, Carl, a Bactrian with two humps, to stay alongside Daniel, their one-hump camel.

One of their most popular new attractions is Yet, their two-toed sloth. Through the Sloth Experience, groups and families can book a visit with the animal, who, due to his strict habitat needs, does not leave the farm.

“He’s a solitary animal,” Kate said, noting that he is the most difficult to maintain a habitat for. The temperature of his space must be kept 85-90 degrees, with the humidity at 75 percent. “It’s to mimic the rainforest,” she said of his native environment. “It helps with their digestive system, which is one of the slowest on earth. He eats every day, but poops once a week. And, when he does, it’s half of his body weight.”

She said the visits have been extremely popular. “We take groups of 10 or under for an hour and a half,” she said. “They get to meet the sloth and feed him.”

Kate said they talk to families before their visits to find out what interests them.

“We ask ahead and see what animals they like and customize the experience for the family to enjoy,” she said — noting that the tarantulas aren’t for everybody.

One animal that can’t be petted is Rufus, their Capuchin monkey, one of two primates they have.

“But they get to meet and see Rufus,” she said. “He loves bubbles and we give the kids bubble guns for him. And it’s fun for them to watch.”

She said they stay busy, hosting visits at least once a day and being open to visitors five days a week.

“People like coming here,” she said, and stated they plan to do farm renovations in 2022 to better accommodate the visits.

One of these will be adding new shelters.

“We’ve done corporate picnics here, but permanent shelters will offer more for people to have picnics and parties,” Kate said.

She said, in the coming year, they plan to have a full open zoo, with vendors for the community to come out, host movies projected by their barn and to have a Zookeeper for a Day event, where children can take care of the animals. She said those would be announced on their Facebook page in coming months.

In addition to events at the farm, the Barkers are continuing to take animals on the road throughout the region. Their travels have taken them as far as Clay, West Virginia and Columbus and she said they are willing to go anywhere within a few hours.

“Our reindeer, Comet and Cupid, have been everywhere,” Kate said, she said of the pair, who were in the Ironton Christmas parade. “We took them to Columbus and to Rio Grande for a drive thru.”

The family has continued to make visits to schools and churches and have also been at events, such as the Greenup Tractor Show and Ironton Wizardfest, where they had animals such as a zebu, a camel and others on hand.

As for care of the animals, Kate said “all of their needs are very different.”

They have a three-section pasture. One part of it hosts the reindeer, who have to be kept separate from other animals because of their antlers. Another section goes to their alpacas, while Daniel, their camel, shares another with their donkey.

“They’re best friends,” she said of the two.

Smaller animals, such as their porcupines, skunk and Patagonian Cavy, are kept in heated enclosures in their barn, while their two monkeys stay in the home with them.

In addition to the pandemic, the Barkers faced another challenge in 2020, when three ice storms hit Lawrence County and they lost power for several days. Kate said many of the animals had winter coats, so the cold was not a concern, while all those who needed to be kept warm were brought into the house.

“We made enclosures for them,” she said, stating they were heated by four generators. She said it went well, with the animals being warmer than the typical barn atmosphere. “The hardest part was we had to check the generators every two hours,” she said.

Following the storms, she said they upgraded their heating and cooling and will be even more prepared should they have another major outage.

For veterinary needs, Kate said they use Claremont Animal Hospital, located in Batavia, who offer care for all the small animals, from the monkeys to the porcupines.

For larger animals, they go through The Ohio State University in Columbus.

She said she likes her business, as they get to “keep it in the family.”

Kate said the business is a lot of work and the needs of the animals make vacations impossibility.

She said she hopes they provide a different experience than what a family might find at a large zoo.

“We offer an opportunity to meet animals — and a chance to get near them, feed and feel them,” she said.

And she said that the family aspect on their farm lets people see the animals are cared for and how close they are to them.

“It’s a different atmosphere,” she said, and we hope they know we really do care,” she said.