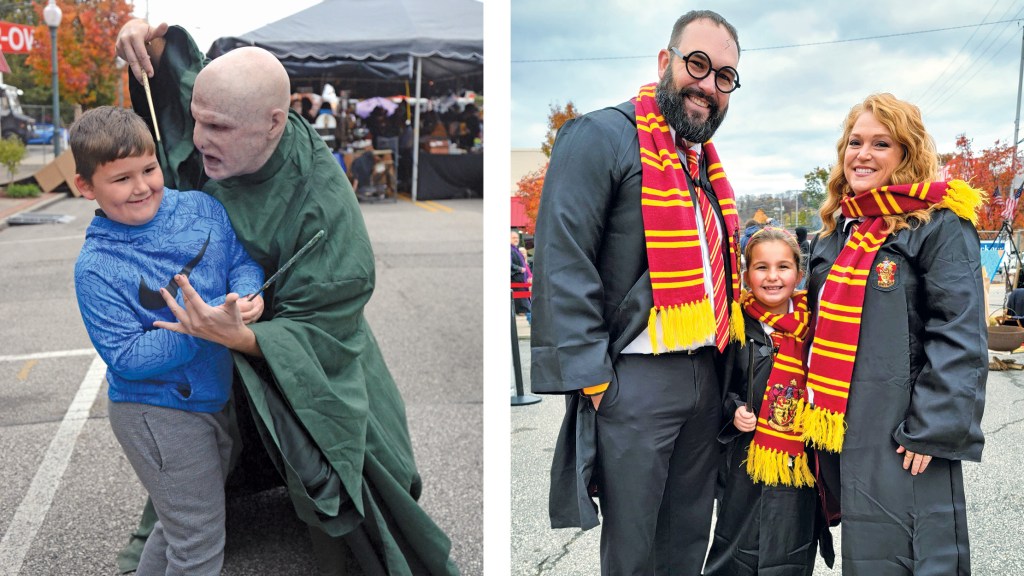 Ironton Wizardfest is one of the county’s newest festivals and, since its inception in 2018, has quickly proven to be one of its most popular. (The Ironton Tribune | Heath Harrison)

Ironton Wizardfest is one of the county’s newest festivals and, since its inception in 2018, has quickly proven to be one of its most popular. Its return in November 2021, following a year off due to the COVID-19 pandemic, did not show any signs of slowing and organizer Brad Bear said ticket sales were some of the best yet.

Bear said the idea for Wizardfest came when he was approached by Rick Jansen, of Ironton. “He wanted to have a festival to bring the community together and bring new people to Ironton,” Bear said.

The idea to theme it around the Harry Potter novels of J.K Rowling allowed them to appeal to a diverse group of people, both children and adults, and gave them room to work in fall festival theme for its mid-November date. “Harry Potter was an interesting idea for a festival,” Bear said. “He got a hold of me, knowing I’m a Potter fan. And we brought in other folks from the community. That’s how it was born.”

Bear stresses that, though he is one of the founders, he is not the sole organizer, and that the festival could not happen without its core group of nine organizers and more than 50 volunteers.

When planning the atmosphere of the event, Bear said he did not want to be “solely like a comic con, and I didn’t want it to be just a street festival.” He said, “We wanted an atmosphere where, you could walk in and it would feel like something different.”

He said one thing they heavily considered in their planning was thinking of the sensory appeal of events of their youth. “Memories and nostalgia tied to smell and taste,” he said, noting the kettles in the streets for apple butter making. Bear points out that this brings in an Appalachian tradition, and the kettles lend themselves to the wizardry theme. “We wanted to bring in a lot of Appalachian culture elements and have a fall festival,” he said.

And signs of this can be seen in the streets.

“Broommaking is an Appalachian craft and trade,” he said, noting one of the vendors, while also pointing to a blacksmith working in the street.

The fandom for the Potter books comes in the form of its attendees, he said. “We got as many costumes groups involved and coming in to create atmosphere in streets,” Bear said. “The fans make it vibrant.” One of the most popular parts of last year’s festival was a group of professional cosplayers from Cos-Ohana, who perform at events around Ohio. One of their members, dressed as Potter villain Lord Voldemort, never broke character while walking around downtown, interacting with fans and posing for photos.

Bear said he wants the festival to appeal to both casual fans, as well as those who know the Potter canon inside and out.

And exploring the downtown area is a key part. Bear said he is often asked why they don’t use a traditional map of the grounds, rather than a stylized, almost treasure map type in their literature.

“We hide things in the nooks and crannies,” he said, noting that there were attractions in the upstairs and basement of the Ro-Na Theater, as well as in other locations fans had to find in the multiple buildings that comprise the event.

Attractions at the festival appeal to all ages, from animals by the BARKer Farm and Petting Zoo, appearances of actors from the films to and 18 and up Wizards Ball with a live DJ that takes place in the Ro-Na on the first night.

Bear said helping to restore the Ro-Na was a big aim of their organizing. “When he started in 2018, it was just hollowed out, with concrete walls,” he said of the historic theater. He said that they repainted the walls, installed silver stain curtains as backdrops and installed 30,000 LED lights in the ceiling. “That took eight full 10-hour days to do,” he said, noting they stay up year-round.

He said they want to include as much of the community as possible and they have worked with groups ranging from the Briggs Lawrence County Public Library to the Episcopal church, the Ohio University Women’s Group to Ironton in Bloom.

He said the first year, they sold enough to keep going, but it was in year two, when they sold out of butter brew, that they knew attendance was increasing. The event typically draws 5,000 to downtown Ironton and Bear says its footprint has grown larger downtown each year. He said they have drawn attendees and vendors from as far away as Canada, Florida, Washington state, Georgia and California. In fact, Bear said that half or more of attendees come from more than 30 miles away.

He said the nature of the event allows them to always come up with new ideas and possibilities are endless. “Potter is a fictional world and allows for everything,” Bear said. “You get to explore new and different things you don’t see every day. Overall, people seem to love it and the vendors and attendees are an incredible group of people.”