Serving those who served 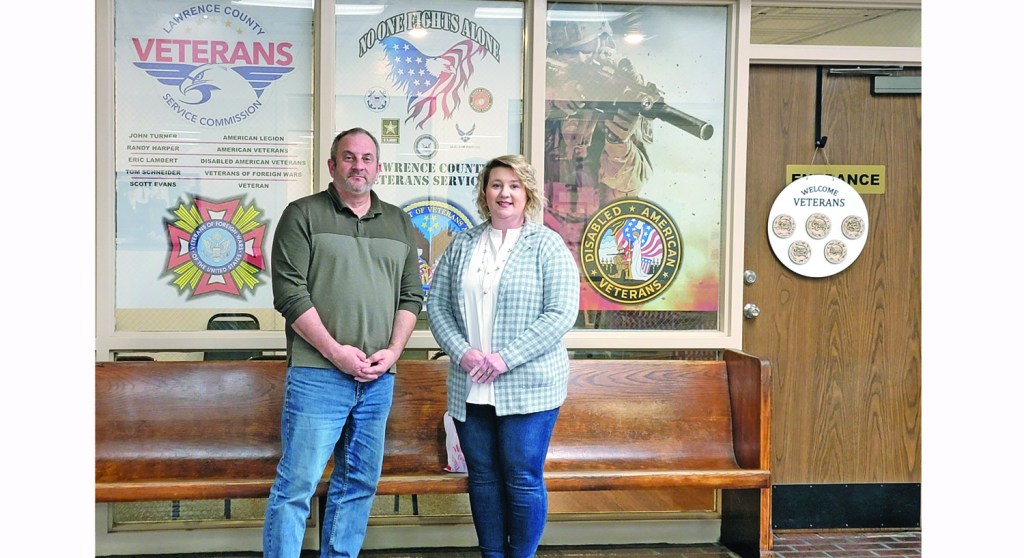 Tim Carpenter and Teresa Brown are Lawrence County Veterans Services officers, whose job it is to help veterans. (The Ironton Tribune | Mark Shaffer)

The Lawrence County Veterans Services office has a simple mission — help veterans and their surviving spouses get the benefits they are entitled to.

The office was created after World War II to help veterans file paperwork for assistance through state and federal programs and help guide them through the red tape of bureaucracy. The office serves well over 1,000 people a year and has two veterans service officers, Tim Carpenter, who has been there for seven years, and Teresa Brown, who started last October.

“The Veterans Service Office provides almost anything for veterans that is within our power,” Carpenter said. “We are very well connected with the VA hospitals, we can file claims and so much more.”

He said that one thing many people don’t understand is that the office can also help widows and widowers of veterans file claims too.

“We can help any surviving spouse file claims and there are a lot of programs they are unaware of,” Carpenter said. “When the veteran passes, they can come to us and we have a lot of knowledge on how they can be helped.”

Among the services the veterans service office can help with is getting a stone for the veteran’s grave marker.

“If they order it through us, we pay for it, as long as they are within the county,” he said.

Besides helping veterans get medical care, the office can also help veterans in their time of need with programs to fix air conditioners or heating systems and even replace refrigerators.

“If it is something like that, that is an emergency situation, we can step in and help them out quite a bit,” Carpenter said.

Both Carpenter and Brown are veterans themselves. He spent 26 years in the U.S. Army, achieving the rank of first sergeant, and served in numerous combat missions. She was in the U.S. Army and was stationed at Fort Campbell, Kentucky, and was an E-4 in the 101st SSB and was a mechanic on light vehicles like Humvees.

After leaving the service, she was a school teacher for 13 years at St. Lawrence and St. Joseph Catholic schools in Ironton and taught K-12.

She loves everything about her new position.

“I feel this is my calling and I have a great team here,” she said. “I feel like serving the veterans is something that I have always had a passion for. Myself being a veteran, I feel like we have to take care of those who served and honor them and do everything for them that is possible.”

She said that one way the office helps the veterans or their surviving spouse is by doing home visits.

The Veterans Service Office is also the approving authority for veterans to be buried at the Veterans Plot in Ironton’s Woodlawn Cemetery and keeping up the appearance of that section of the cemetery is one of Carpenter’s focuses.

When he took the job seven years ago “it was in such bad shape, I felt something had to be done and I am doing my best to get it up to a standard that veterans would be proud of.”

One of the things that the office has undertaken is the raising of the grave markers. Carpenter said that many of the markers had sunk into the sandy soil of the cemetery and some of the Spanish American War and World War I veterans’ markers were barely visible.

The veterans plot is property of the county, who is in charge of care and maintenance of the markers.

“Most of the headstones themselves had sunk to the point you couldn’t even read the names anymore, so that was my big push, to get them off the ground so they wouldn’t sink anymore,” he said. In early 2020, the office started installing aluminum platforms that raise the markers out of the ground and have a locking mechanism for the small markers that identify which war the veteran was in, along with a spot to put an American flag. There are about 1,000 plots that will need markers and Carpenter said it will take some time to get them all improved.