Deeds finds just what she wants with Alice Lloyd 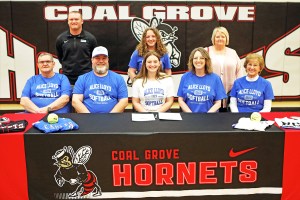 COAL GROVE — There are two things that Katie Deeds really likes: living in a quiet area and playing softball.

And with on stroke of her pen, the Coal Grove Lady Hornets’ senior softball standout got both as she signed a letter-of-intent to play for the Alice Lloyd College Eagles on Friday.

Deeds said she looked at Kentucky Christian, Shawnee State and a few other schools, but the choice was obvious.

“Nothing really felt as good as home as Alice Lloyd did,” said Deeds.

“I like the small town feel of it. The coaches were really nice and welcoming. It just felt like a good environment to be in.” 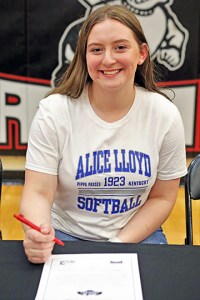 The Eagles are an NAIA school and members of the River States Conference. The school is located in the rural area of Pippa Passes, Ky.

Lady Hornets’ coach Aaron Rice said Deeds will be a great addition to the Eagles program on and off the field.

“She’s a good worker. He comes out every day whether it’s in the field or in the circle she always works hard, does what she’s asked to do. She’s the kind of kid you like to coach,” said Rice.

“She’s been working from both sides of the plate. She’s done lefty quite a bit and we’ve probably worked on the right-hand side as well. She’s very versatile whether she’s pitching or a position player.

Deeds will be the Lady Hornets catcher but she can play other positions as well and she’s a switch-hitter. Her versatility helped sell her to the Eagles’ staff.

“Catching is my favorite and that’s what I mainly got recruited for,” said Deeds. “Outfield is probably my second favorite. I like it out there. But I’ll play anywhere.”

Versatility may earn Deeds some playing time early, but she knows that she will have to earn whatever position she plays.

“I’m just ready to go down there and work and earn my spot, just like I did here,” said Deed.

Other than some basketball, Deeds has been strictly a softball player during her high school career.

“I started playing when I was six or seven. I really like being part of a team, having all those other girls I can trust. I just want to go out there and show everybody what you can do,” said Deeds.

Although basically a singles-doubles hitter in the past, Deeds has added some extra pop in her bat this season.

“I’d like to think I’ve increased my power. During the offseason I got with coach Dave (Miller) and he’s helped me a lot having been a college coach,” Deeds said.

“I spend a lot f time (working on softball). I play a lot of summer ball with my travel team River City Rage. It’s just been my life basically. There’s never an offseason.”

Deeds plans to major in elementary education and possible coach some day.