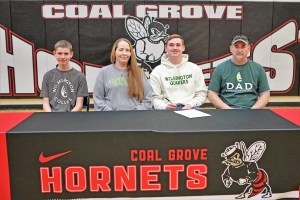 COAL GROVE — It was decision time for Perry Kingrey.

The Coal Grove Hornets’ senior three-sport standout was having to decide on a college and he said that became an easy choice.

Now, picking between football and track could have been a difficult decision but the Wilmington College Quakers made it really easy for him.

They’re letting him do both. 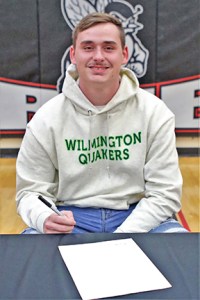 With all the decisions decided, the first team Division 6 Southeast All-District selection and special mention All-Ohio standout signed a letter-of-intent to play for the Quakers on Tuesday.

Kingrey is glad he didn’t have to choose one over the other.“They’re really about equal to me. They’re about the same,” said Kingrey.

Wilmington was the choice over others schools such as Muskingum, the University of Charleston and Capital.

“Wilmington had the best fit for me. I really like the program they have going on.,” said Kingrey.

“They have a great coaching staff, they’re really involved and everyone has bought in. They know what they want and they know how to get there.”

As for getting the chance to do two sports, Kingrey said the football coaches made it easy for him.

“The (football) coaches were super supportive of it. Discus is probably one of my favorite things to do. The combo that I get to play football and track just sold the deal for me,” said Kingrey.

The Quakers plan to keep the 6-foot-5, 235-pound Kingrey at tight end and he’s hoping to learn and maybe find his way onto the field at some point early in his career.

“They told me they ave one tight end and he’s a senior. He can’t promise I’ll start, but they said they do need a tight end. They’re running overflow on them, so that might put me higher up in the que than I originally thought,” said Kingrey. “

Former Coal Grove standout Jeb Jones has proven to be an inspiration to Kingrey. Jones — a senior — was second team All-OAC this past season and third team all-region as well as All-Academic OAC.

“We had a kid graduate from here, Jeb Jones, he went to Otterbein and he was an All-OAC all-star and that’s what I’m really looking for. That’s something I’ve had on my mind for quite a while,” admitted Kingrey.

“I was hoping that I’d get a chance to play on the same field as him but I missed it by one year.”

Coal Grove head coach Jay Lucas said Kingrey should be a factor in the Quakers program at some point in his career.

“Perry’s a tremendous young man. He didn’t play football when he was a freshman but he came out as a sophomore and you could just tell he had so much talent, so much ability. Over the span of the next few years, he grew tremendously as an athlete and as a football player,” said Lucas.

“He’s big, he’s strong and he’s athletic. I think right now he’s just scratching the surface of his ability. I think as he goes onto the next level he’s going to keep improving, keep getting better.”

Although Coal Grove is run-oriented, Kingrey became a key target when the offense elected to pass. Lucas said Kingrey has excellent hands and can block or catch the ball.

“Perry came along this past season as a receiver as well as a good blocking tight end. I tell people all the time he’s one of the best tight ends in the area,” said Lucas. “He can do virtually anything out on the football field.”

Kingrey — who said he plays a little guitar — plans to major in sports sciences with plans to be a physical therapist.