Panthers’ Shepherd will now get his kicks playing for Marietta 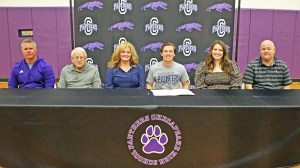 CHESAPEAKE— Lucas Shepherd shared some personal information that he could juggle. He also had to juggle playing soccer and kicking a football both during the fall.

But after signing a letter-of-intent Tuesday with the Marietta College Tigers, Shepherd plans to keep all his juggling to strictly his leisure time. 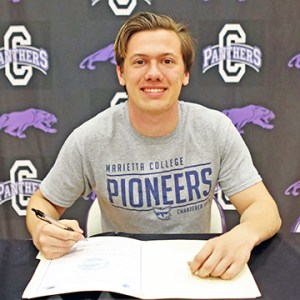 “I can juggle. But there’s nothing out of the ordinary for me. Just a kid from Chesapeake trying to kick a football,” said Shepherd.

The Chesapeake Panthers’ senior placekicker checked out various shoots but preferred Marietta due to the academics and opportunity to kick for the football team.

“I looked at Marshall locally and Concord in West Virginia. I really like both of their campuses but Marietta obviously came out to be my choice,” said Shepherd.

“I talked to their coaches and they had some seniors leaving and some drop out as well. They asked me to come out a few days .I really enjoyed their campus and it just felt like the right fit.”

Although he has played soccer most of his life, Shepherd plans to focus only on football although he did speak with the Marietta soccer coach.

“That’s plenty right there,” Shepherd said with a laugh when deciding to focus on football.

Panthers’ head football coach Todd Knipp expects Shepherd to do well by focusing strictly on his placekicking and kickoffs.

“I’m excited about his future. Lucas had a tremendous career for us. His a strong-legged kid. I’m real excited now to see what happens when he just concentrates on kicking, especially after being a soccer player and a kicker for us the last four years,” said Knipp.

“Marietta is a good school. It’ll be exciting to see what he can do in the OAC and at the Division 3 level.”

Moving up from high school to the college level brings a lot of pressure for kickers, but Shepherd just shrugged off the idea of the job being more stressful.

Despite a longer career of playing soccer, it didn’t take Shepherd long to fall in love with football, too.

“I’ve always played soccer. I started kicking in the eighth grade whenever coach asked me to come out. I came out for a couple of days, tried it and liked it and kept doing it,” said Shepherd.

Despite always playing soccer and having thoughts of playing at the next level, that thinking shifted once he reached high school.

“That was always the plan. Do soccer, especially freshman and sophomore years and then at the end of my sophomore and junior years I realized I could kick a football in college and take it easy maybe. But there’s nothing easy about it. Football became the choice and I stuck with it,” said Shepherd.

The Panthers’ kicker said having played soccer and then trying to kick a football were two different techniques that took some adjustment.

“It definitely took me some time at the beginning of the eighth grade to differentiate the two.  Whenever I got into a groove with it and kept doing it, it just became easier to differentiate it,” said Shepherd.

Chesapeake’s Brady Wilson is a current punter for Marietta and Shepherd talked to him about the school and the program.

“I used to play with Brady Wilson and he had influenced me. I talked to him at Marietta and he said he liked the classes, the academics and that’s the main thing I’m going for, the academics, of course. And athletically, being able to do it is a pleasure,” said Shepherd who plans to major in exercise science.