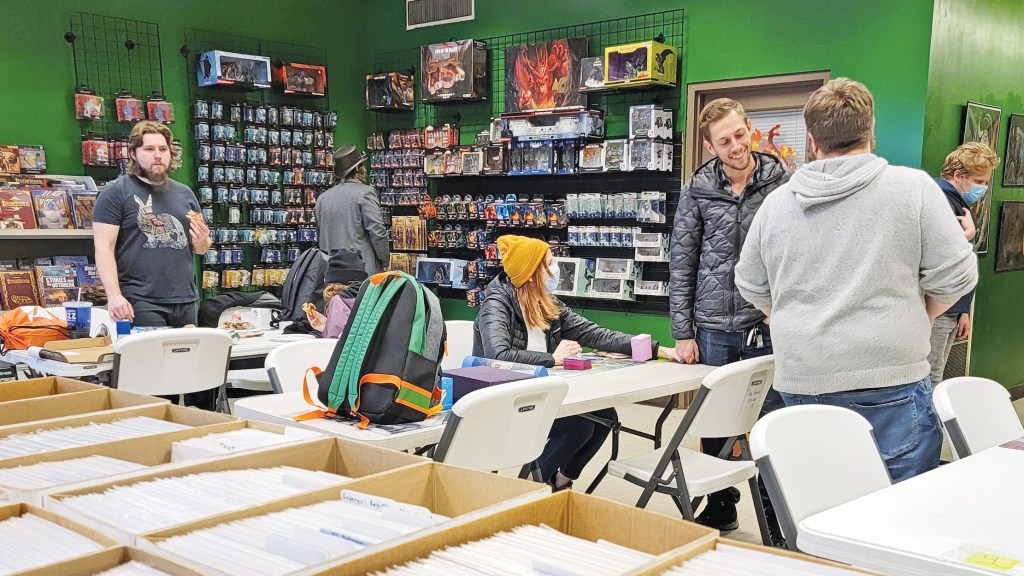 Goblin Traders is a long-time fixture in the miniature table top and card game scene in the Tri-State. (The Ironton Tribune | Mark Shaffer)

There are constant battles in an unassuming building on the corner of Third and Jefferson streets in Ironton.

Sometimes, it is squadrons of rebel pilots taking to the space between planets to battle their Imperial counterparts. Other times, it is vast armies in the far, far future in a battle of survival against dark magic. Some afternoons, it is a battle of digital monsters.

All of these battles take place on long tables with miniature spaceships or miniature armies or decks of cards. All to be packed up, put in boxes until the next battle next week.

It’s just another day at Goblin Traders, a long-time fixture in the miniature table top and card game scene in the Tri-State.

Owner Aaron Dillon and his friend, Cody Sloas, bought Goblin Traders in 2017 from the original owner, Bryce Martin, who they both knew from Ohio University Southern. Martin had graduated from college and wanted to move on.

The store was moved from its original site on Center Street to Third Street in January of 2020.

And like many businesses in 2020, the COVID-19 pandemic altered the way they did business.

The gaming shop was set up not only for people to come in and shop, but to hang out and play long games against other people in fairly tight quarters.

“As timing would have it, we moved and we were set up and started our first gaming tournaments on a Saturday and then, on Monday, the pandemic broke loose and everything was shut down,” Dillon said. “We were effectively open for a week.”

And like many businesses, Goblin Traders took to the internet to stay afloat and keep the customers supplied with their gaming needs. They started doing curbside pickup, local deliveries and selling online.

Demand was high amongst the table top gamers who were ordering models and miniatures to paint.

“They were at home all the time and it was the perfect time to build models, paint models and eventually, after the lockdown was lifted and people could gather and play games, they had models for them to enjoy,” Dillon said.

One of the stranger things during the pandemic was that Pokémon cards and Magic: The Gathering cards began attracting a lot of attention and the demand soared so much that some retailers were having to lock their cards behind glass to prevent stealing and limit the number of packs that were sold to individuals.

While that didn’t happen for Goblin Traders, after the restrictions were lifted, the store started seeing new, younger customers who were interested in Pokémon.

“What we heard was that while people were home for several months, they had time to clean. And while they were cleaning, they found boxes of cards from several years ago in closets and attics,” Dillon said. “We would have a mother or father come in and say that while they were home, they found their boxes of cards from when they were kids and their kids got into collecting and it gave them something to do with their kids. Once stores opened up again, families were out looking for cards.”

In-store gaming resumed after the restrictions were lifted, and it spread from Goblin Traders to their other store, Trader’s Café on Second Street, that Dillon and his wife, Amy, opened up in February of 2020.

“We did ease back into it, we didn’t just open back up and have the large size tournaments like we did before,” Dillon said. “We limited seating and had social distancing. But the demand was overwhelming and everyone wanted to come in and play a game on a Friday night or a Saturday night because they had been in their houses for months and wanted to see their friends again. So how we handled it was to have tournaments at Goblin Traders and then have a secondary event at Trader’s Café, so it helped to spread the crowd between two places.”

Dillon has a long interest in table top games, having started playing the card games Magic: The Gathering and Pokémon with his cousins when he was young. He started going to game shops to buy cards and noticed that other people were playing games like Warhammer and became interested in                            miniature gaming.

Each of the games had a different appeal to Dillon.

“With Pokémon, my favorite thing was collecting and trading with my friends. With Magic: The Gathering, it was social aspect, getting together first with my cousins and then eventually my friends as well,” Dillon said.

And he said that he enjoyed that all of them have the strategy aspect to them.

“With the trading card games, there is deck building and trying to figure out how to construct your deck to compete with other decks, or if you find a certain kind of card you like, trying to exploit that card and play that card to the best of your ability,” he said. “And with table top games, there is the army building where you build your team. But as far as pinpointing one thing, it was the social aspect, hanging out is the best part.”

That social aspect is one of the things that brings people into Goblin Traders. Besides being well-stocked with the necessities like dice and miniatures for the various game lines, there is usually some type of game going on.

These days, Dillon doesn’t play as much as he used to, maybe once a month or so.

“I play a whole lot less these days,” he said laughing. And it’s not just having two children and a third due in February. “It is more because of the business side. Running a small business is time consuming and any free time I had for games, I now spend on the business. I try to play once a month or so, maybe a game of Warhammer or a Pokémon tournament or just getting together with friends and playing a couple rounds of Magic: The Gathering.”

And while gaming is now a job rather than a hobby, Dillon says he enjoys the challenge of it.

“And what made me enjoy the table top gaming or the card games is the social thing, with the employees of the store and the customers, it does become a big social circle and I enjoy that a lot. I’m surrounded by people who share my interests.” σ