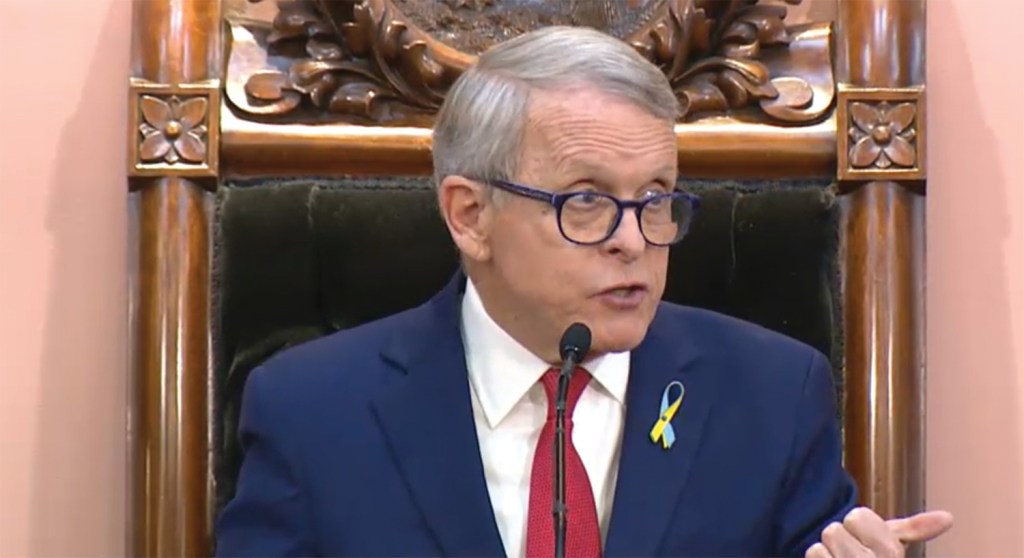 Ohio Gov. Mike DeWine delivered the State of the State Address at the Statehouse on Wednesday. (The Ohio Channel)

COLUMBUS — Ohio Gov. Mike DeWine delivered his 2022 State of the State Address to the Ohio General Assembly on Wednesday.

The speech highlighted the DeWine-Husted Administration’s successes accomplished in partnership with legislators while also focusing on future initiatives to help all Ohioans.

“Now is the time to ‘seize our Ohio moment!’” DeWine stated during the address.

DeWine touted the Ohio economy’s successes including the state budget being balanced, the state’s bond rating being its highest since 1979, and the unemployment rate — now down to 4.3 percent — is at lows touched in only two other periods in our state’s history. In addition DeWine highlighted $1.2 billion slashed in state spending and tax cuts of $3.6 billion leaving more money for businesses to reinvest and more money in the pockets of Ohioans.

Among the highlights in the address where DeWine laid a vision for Ohio’s future:

“I see an Ohio that harnesses the innovative potential of our research colleges and universities to conduct strategic, cutting-edge research,” the governor said. “An Ohio with fewer emergency room visits and where fewer Ohioans with mental illnesses are living on the streets — an Ohio where mental illness isn’t criminalized. lessening pressure on the criminal justice system.”

“From Maumee Bay to Geneva to Lake Hope to Great Seal to Hueston Woods to John Bryan, our state parks are the crown jewels of Ohio, and they add so much to our quality of life and what makes Ohio such a great place to live,” he said.

Appalachia
DeWine reaffirmed his commitment to Ohio’s Appalachian region to ensure no Ohio citizen is left behind.

“One of the most important things we can do that will benefit — not only the 32 counties in the Appalachian region, but also our entire state — is to make a long-overdue, comprehensive investment in Appalachia,” he said.

Mentors
Emphasizing the importance of adult guidance for young people, DeWine talked about his plan to work with the Ohio General Assembly and with community leaders and our colleges and universities to create a combined scholarship and mentorship program so that no child in this state lacks guidance and direction and has the financial support necessary to go to college or technical school.

“Our state’s economy — our state — will not fully flourish if we leave these kids behind,” he said. “There is so much untapped potential that our state cannot afford to waste.”

Distracted Driving
Changing the culture around using electronic devices while driving has been a priority of DeWine’s. More drivers putting down their phones and using hands-free technology will help prevent crashes, save lives and make our roads safer.  He called on the General Assembly to pass House Bill 283, a distracted driving bill which would make holding an electronic device while driving illegal.

Law Enforcement
DeWine reiterated his commitment to funding the police.

“We are doubling down on our support for law enforcement by giving them more resources — not fewer — to keep our communities safe,” he said. “We need to get tough on the convicted violent offenders who carry and use weapons in violation of the law.  If we can remove this small group of dangerous offenders from our streets, the violent crime in our distressed neighborhoods will be reduced dramatically, and the citizens and families who live there will be safer and lives will be saved.”

“We know that a child’s brain is 80 percent developed by the time they turn three years of age,” the governor said. “So these first years of development are so very important.  Enrollment in the Imagination Library improves Kindergarten readiness and family literacy habits.  And, no matter where you live in Ohio, your child is eligible.”