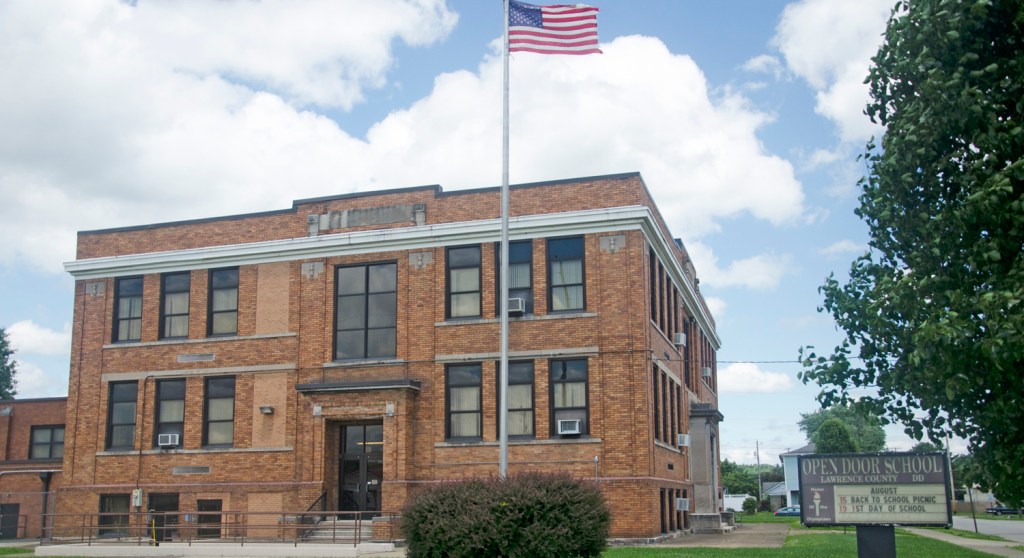 Ironton resident Mary Williams voices her opposition at Tuesday’s meeting of the Lawrence County Commission to the former Lombard Elementary School site as a location for a new Lawrence County Jail. (Screenshot)

A proposed location for a new Lawrence County Jail drew criticism from some neighborhood residents at Tuesday’s meeting of the county commission.

Last year, Gov. Mike DeWine’s office announced that $16.8 million in state funds had been allotted to the county for building a new jail, a long-sought goal from local officials.

The county commission has voted to place a half percent sales tax on the May primary ballot to make up the difference in the $32 million cost of building and operating a new jail.

The commissioners have selected the site of the former Lombard Elementary School and Open Door School, at 421 Lorain St. in Ironton, as the site for the project.

At Tuesday’s meeting of commission, Mary Williams, a lifetime Ironton resident, who lives on South Fifth Street in the area, voiced her objection to the site. 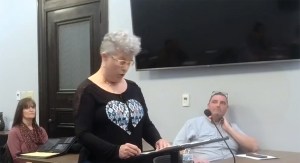 Ironton resident Mary Williams voices her opposition at Tuesday’s meeting of the Lawrence County Commission to the former Lombard Elementary School site as a location for a new Lawrence County Jail. (Screenshot)

Williams said she was “speaking on behalf of myself and the neighborhood” when she said a new jail was supported, but that they opposed the site in “the middle of a neighborhood.”

Williams proposed two alternative sites — South Third Street, between Vine and Ashtabula streets, and across from the Ohio Department of Transportation garage on Commerce Drive, both in Ironton.

“And I feel certain that the three of you know of others available,” Williams said to the commissioners.

Williams said that if the Lombard/Open Door site was not removed from consideration shortly, she and neighbors would “launch a campaign vehemently against the sales tax.”

Williams said she was not seeking to debate the matter and understood the commission had chosen the site, as they already owned the property.

“It makes sense, because of the investment,” she said. “But it doesn’t make sense to place it into a neighborhood. We ask for your consideration.”

Commission president DeAnna Holliday thanked Williams for making an appointment to speak and voicing her concerns in the “appropriate way to commissioners.”

She said Williams correctly understood the commissioners’ “thought process” regarding the former school site and it already being owned by the county.

“Your county commissioners worked tirelessly on a grant application that we submitted last year to the state,” Holliday said, adding that they “firmly believe” the county received the funds because the project was “shovel ready.”

Holliday noted that the majority of counties in the state had applied for the $50 million in available funds and that Lawrence County had been allotted the highest amount.

“We were the most successful,” she said.

Holliday said there would likely be some opposition, no matter where in the county a site was chosen.

“We’re not opposed to looking at another site,” she said, noting they had considered the option Williams mentioned and there were issues with those and other sites, including restrictive covenance on deeds.

“The hard part of the job is representing you, as well as all of the county,” Commissioner Colton Copley said said, noting that the county would continue looking at other options.

“We will continue to work toward finding a solution that works for everyone,” he said. “But we are still charged with protecting the county as a whole as well.”

But Copley said the property chosen is the one the county has to continue working with for now.

“And we don’t want to give you false hope on other options,” he said.

Holliday also stressed that the proposed sales tax is not a property tax.

“It is a tax on goods,” she said. “It does not tax groceries or gas. It was the least invasive way to ask the citizens of Lawrence County to fund a new jail and its operation.”

Commissioner Freddie Hayes Jr. said he appreciated that Williams saw the need for a new jail for the county.

“I’m like the other two,” he said of his fellow commissioners. “If we can find another place, we would do it. But it’s really hard with restrictions that are placed on property. We will continue to look, but give us a little time. I think we can come to a resolution.”

Williams responded by asking, “So what you are saying, without coming out and saying it, is that you will not remove it as a possible site?”

Copley said that “without a viable second option,” it would “put damage on the entire county to take away the grant.”

Holliday said it was “premature for us to say anything today.”

“But we will continue to have this conversation,” she pledged.

In other business, the commissioners:

• Approved the appropriations and transfers under $50,000.00 dated March 22, submitted by the county administrator.

• Received and filed the certificate of county auditor that total appropriations from each fund do not exceed of official estimate of resources.

• Approved the Child Support Enforcement Title IV-D Contract with Pennington and Associates to provide service of process to the LCDJFS for the contract term of Jan. 1-Dec. 31.

• Approved the resolution for the adoption of the Lawrence County Natural Hazards Mitigation Plan, October 2021.

• Received and forwarded the correspondence from the Rome Township Trustees regarding questions pertaining to the 54-inch storm water drainage culvert that serves a portion of Rome Township.