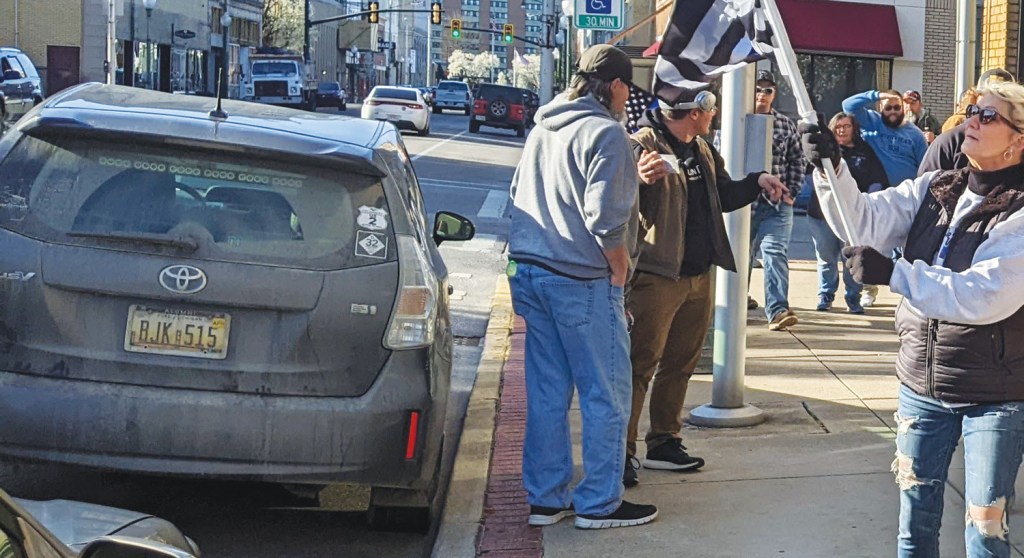 YouTuber Chille DeCastro, in headphones, is shown talking to people in a Blue Lives Matter march on Monday outside the Ironton City Center. DeCastro was arrested in the same building on Tuesday. (The Ironton Tribune)

On Tuesday evening, a YouTuber who has been in Ironton talking to residents about issues related to law enforcement, was arrested after police said he refused to leave the Ironton City Center.

Jose DeCastro, known on his social media accounts as Chille DeCastro, was arrested around 5:20 p.m. after he spent a couple of hours live broadcasting on his YouTube channel, Delete Lawz, from the city center after he was unable to find a place to do a class for his followers on Constitutional law.

He was arrested and charged with resisting arrest, disorderly conduct and criminal trespassing after police said he refused to leave the lobby of the building. He was taken from the city building and incarcerated in the Lawrence County Jail.

Earlier in the day, DeCastro had filed lawsuits against the Ironton Police Department and WOWK after the television station ran an article on their website about a “soft lockdown” of the Ironton schools because of concerns that one of DeCastro’s videos had been sent to a parent or a student. DeCastro had denied, on his video channel, sending such a video.

DeCastro had been in Ironton for a week talking to residents about alleged police abuse. DeCastro is an activist against Terry vs. Ohio, a 1968 case that allowed police to ask for the identification if the officer has a suspicion that the person has committed a crime or seen a crime occur.