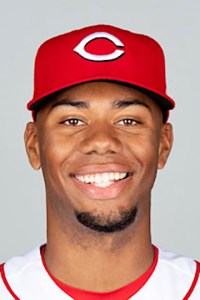 The second overall pick from the 2017 draft reached 104 mph with his fastball in Triple-A last season and could be one of the most exciting rookies in baseball this year. The right-hander will pitch behind opening-day starter Tyler Mahle during a weekend series against the World Series champion Atlanta Braves.

Manager David Bell informed Greene that he’d made the team Tuesday, and Cincinnati announced it Wednesday.

“I’m still at a loss for words. I knew yesterday, but I had to keep it on the down low. I told my family,” Greene said.

“A lot of work went into this. There were so many obstacles, so many ups and downs, but it is not going to be the last time I face adversity. I’ve learned a lot of life lessons. I had to grow up pretty quick for some things.”

Mahle will pitch the opener Thursday, April 7, with Reiver Sanmartin and Vladimir Gutierrez going Friday and Saturday. The 22-year-old Greene gets the ball for his big league debut in the series finale Sunday.

Greene missed the entire 2019 season due to Tommy John surgery but looked to be at full strength last year, when he was 10-8 with a 3.30 ERA and 139 strikeouts in 106 1/3 innings between Double-A Chattanooga and Triple-A Louisville.

“Hunter had a lot of confidence this day would come but it is still a dream come true,” Bell said. “Sometimes for a guy like him, it can be more difficult with the expectations.”

Greene said he’s eager to take on the World Series champs, and also excited to face the potent Los Angeles Dodgers lineup in his second start. His only disappointment: his second outing is likely to come April 16, meaning Greene — a Los Angeles native who is Black — will miss pitching on Jackie Robinson Day by about 24 hours.

“That would mean the world,” he said. “I was actually asking if I could keep that jersey. I would pay whatever they asked. It is just a historic moment. I hope one day in the future one of my start dates would be on that day.

“He is one of my idols, actually my only baseball idol. I’ve always looked up to him. He was a great role model for the game and just for life.”

Cincinnati will begin the year with one of the majors’ least experienced rotations, with 123 major league starts combined.

The Reds haven’t named a fifth starter, but it could be rookie Nick Lodolo. Luis Castillo and Mike Minor are going to start the season on the injured list.

Lodolo, the Reds’ first choice in the 2019 draft, is still in the mix, but adding him would require the Reds to make room for him on the roster. Tony Santillan will work out of the bullpen. He was competing for the rotation and pitched well this spring.