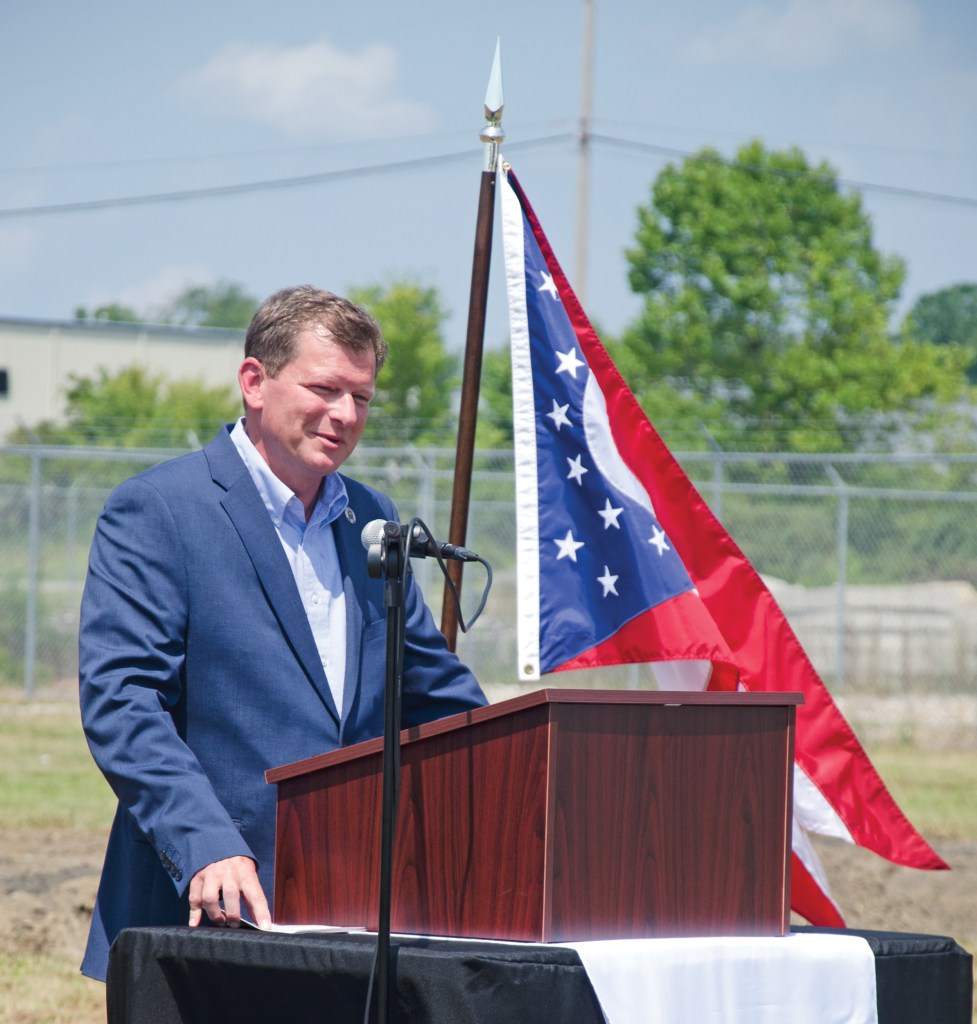 State Rep. Jason Stephens, R-90, speaks at a groundbreaking ceremony for the Spec 13 Building in August 2021 at The Point industrial park. (The Ironton Tribune | Heath Harrison)

State Rep. Jason Stephens, R-93, has announced that he is making a bid to be speaker of the Ohio House of Representatives.

Stephens, whose district covers most of Lawrence County, announced and discussed his plans on Monday with The Ironton Tribune.

Stephens, a Getaway resident and former Lawrence County auditor and commissioner, was appointed to the seat in 2019 to fill the vacancy created by the retirement of Ryan Smith. He was then elected to a full term in 2020.

He is running unopposed for re-election (pending approval of state redistricting maps) and would have six more years to serve before being term limited to 10 years in office.

Stephens said that the length of time he could serve as speaker is one of the benefits he could bring to the office.

“I think it’s an important thing to bring stability to the statehouse,” he said, stating that there has been high turnover in the position.

He also cited his two decades in public service since his first election in 2000 at the county level.

“Since I was first elected, I’ve been working to bring people together,” he said.

Ohio Republicans currently hold a supermajority in the statehouse and, should they retain control after November’s elections, Stephens would be among candidates vying to follow Robert Cupp, R-4, who is term limited after January.

“The seat would be open and I wouldn’t be running against him,” Stephens said.

Stephens said he was encouraged by other House members to make the run. The Republican caucus will meet in November to vote on a speaker candidate, followed by an official House vote in January.

Stephens said, as far as he knows, if he is successful, he would be the first speaker from Lawrence County. Smith, a Gallia County resident whose district covered Lawrence County, served a few months as speaker in 2019, before being defeated by Larry Householder for the position.

Stephens pointed to Smith and leaders from southern Ohio, such as Scioto County Democrat Vern Riffe, who served as speaker, and Republican Jim Rhodes, of Jackson County, and Democrat Ted Strickland, of Scioto County, who both served as governor, as examples of success political leaders from the region have had at the state level.

“In southern Ohio, we have a pretty long history of having our voice heard and making those connections,” Stephens said.

Stephens said he hopes he could bring more transparency to government and pointed out that the speaker’s office is highly influential.

“And depending on where a piece of legislation is, it can be the most influential,” he said. “So I’m excited about it. And I can bring stability to leadership. And if you have a stable government, you have more prosperity.”