Ready for a new season 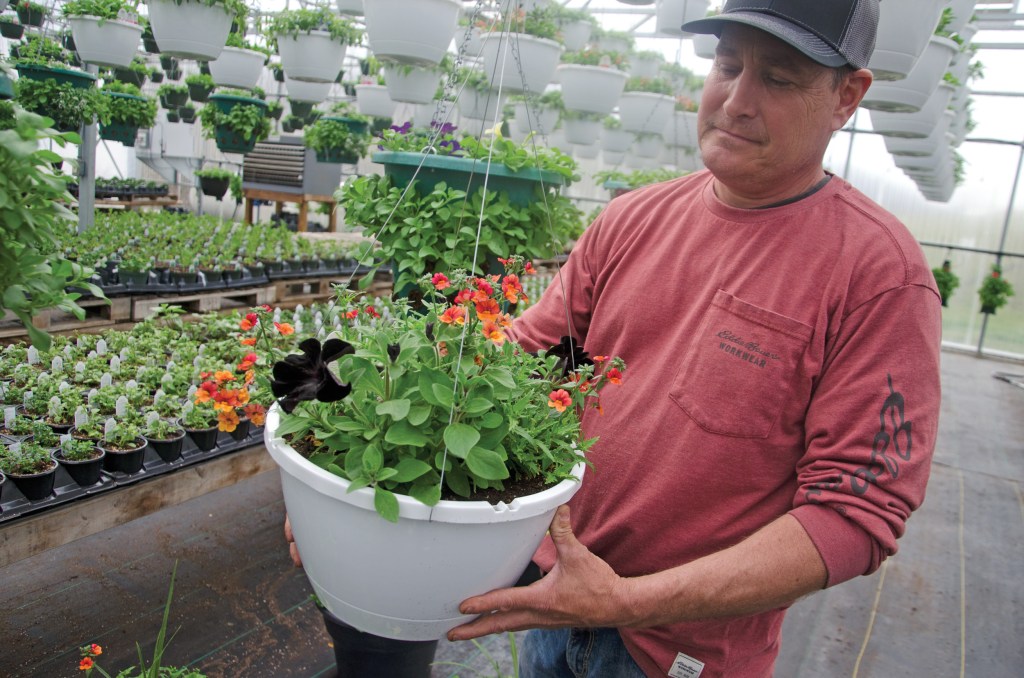 Ed Pratt carries a large hanging basket at Pratt’s Greenhouse. The business, located on County Road 17 in South Point, is set to open for the spring planting season on April. (The Ironton Tribune | Heath Harrison) 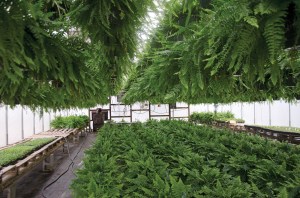 The fern room at Pratt’s Greenhouse in Chesapeake. (The Ironton Tribune | Heath Harrison)

SOUTH POINT — April is coming near and Pratt’s Greenhouse is ready to kick off another season.

The business, owned and operated by Ed Pratt and his wife, Trena, is set to open again on April 1 and the family has been working hard on preparation, transferring young plants from small containers to larger pots and baskets for the expected customers.

Pratt said he has owned the business since 2000 and all the work is done by the family, including his two daughters, Hannah and Haylee.

With multiple greenhouses on the property, he says they offer a little bit of everything, from flowers to vegetables to ferns and other plants, in small pots to large containers and hanging baskets. 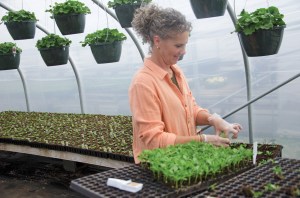 Trena Pratt works on plants in one of the building at Pratt’s Greenhouse. The business, which she co-owns and operates with her husband, Ed, has been open since 2000. (The Ironton Tribune | Heath Harrison)

Pratt said their most popular item is petunias, available in several varieties of the trailing type.

“That’s one thing we’re always guaranteed to do well,” he said.

Another big seller are tomato plants, of which he said they will have about 10,000 available. 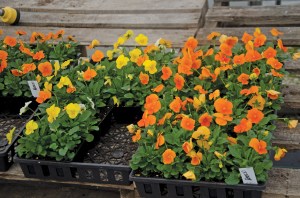 Pratt’s Greenhouse, located on County Road 17 in South Point, will have a wide variety of plants available when they open for their new season on April 1. (The Ironton Tribune | Heath Harrison)

“Those always do very, very well,” he said.

Pratt said there has been an increase in interest in those in recent years.

“Since COVID, people have really concentrating on growing them,” he said.

They also offer several varieties of cactuses, which Pratt says they get from a man in Getaway, who he describes as one of the best in the business in the U.S. He said they have no repeats of the types he provides.

The greenhouses are packed with plants and he says, “99 percent of this will be sold out by Mother’s Day.”

From there, the family takes a break, and then reopens in the fall for mums, Pratt said.

The Pratt family has been in Lawrence County and farming since the early 1800s, he said. They moved to their current property, located at 4207 County Road 17, in 1903. 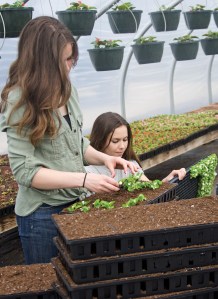 Sisters Hannah and Hayleee Pratt work on plants in one of the buildings at Pratt’s Greenhouse, owned by their parents, Ed and Trena, in South Point. (The Ironton Tribune | Heath Harrison)

“We milked cows for several generations, for about 100 years” he said, before dairy faring became unsustainable due to changes in the industry. 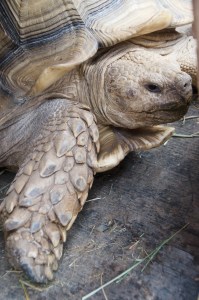 A 150-pound tortoise is one of the animals at Pratt’s Greenhouse in South Point. (The Ironton Tribune | Heath Harrison)

He said they have continued to raise beef cattle.

The extended Pratt family contributes to the greenhouse, he said, coming in once a year to help out on “geranium day.”

Visitors to the greenhouse will see evidence of farm life, with chickens roaming the grounds. The family also has an unofficial petting zoo, he said, with several goats, as well as a 150-pound tortoise, which stays in a heated home, converted from a children’s playhouse.

With two decades in the business, Pratt says he has a good idea what customers want and expect.

“The familiar things stay popular,” he said. “The biggest challenges is figuring out the small changes from year to year, but it’s a pretty consistent business.”

Pratt’s Greenhouse will be open from 10 a.m.-6 p.m., seven days a week, starting April 1. For more information on the business, visit their Facebook page.