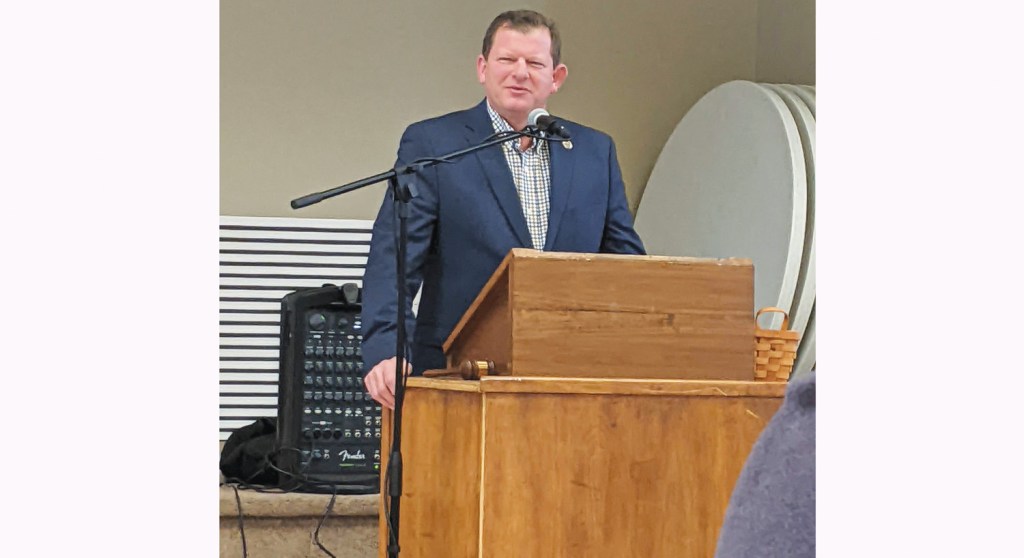 State Rep. Jason Stephens speaks at the Lawrence County Chamber of Commerce’s Final Friday luncheon for March on Friday. Stephens says he is making a bid for Ohio speaker of the House this year. (The Ironton Tribune | Sarah Simmons)

State Rep. Jason Stephens spoke to the Lawrence County Chamber of Commerce’s Final Friday luncheon attendees last week, where he shared his experience at the statehouse the past few years, as well as discussed issues at the state and local level.

“It is a truly is an amazing thing being involved in local government and the community for a couple of decades, and it has been really good training to be ready to go to Columbus,” he said.

Stephens pointed out that, less than six months after his appointment, the COVID-19 pandemic and its associated shutdowns and stay-at-home orders began.

He looks forward to the Chamber’s Legislative Day this year and the chance to see people from Lawrence County and now get the chance to “show them around the statehouse.”

“One of my favorite ways to describe it – it’s just like the courthouse in Ironton, they just wear nicer suits there,” he said. “We have almost 12 million people in state of Ohio and it comes together right there at statehouse. And it’s not just statehouse, the Supreme Court is there, and the governor’s office — all of that is within walking distance. You can go to lunch and run into a Supreme Court justice or run into the secretary of state. It’s just a constant flow of things.”

State redistricting
Stephens spoke of the redistricting fight taking place in Lawrence County, with the Ohio Supreme Court recently throwing out the most recent set of maps put forward by the state’s redistricting commission.

“It has been an impact to Lawrence County for decades,” he said of legislative boundaries. “As you know, currently, the legislative district is the 93rd district that I represent, which actually is all of Lawrence County, except for the Village of Coal Grove, the City of Ironton, Hanging Rock and Hamilton Township. That part, which we affectionately call ‘the sliver on the river,’ is the 90th district, which is currently Brian Baldridge.”

Stephens pointed out that in all of the maps put forward by the redistricting commission to date, Lawrence County would be in a single district, the 93rd, unifying the county under one representative for the first time in decades.

“I can tell you I think it’s important that we have a state representative from Lawrence County who knows the difference from Greasy Ridge and Possum Holler — important things. It make just makes it a lot better to have that local knowledge and representation.”

Stephens said the redistricting fight would likely not impact partisan representation from the area, with Ohio being solidly Republican.

“It’s really not a matter of our district in our area because of political trends,” he said. “The margins are pretty clear which party is going to win. But, in urban areas, there are very, very tight races. You could move those legislative lines a mile one way or the other, and it could really make a difference.”

Appalachian investment
Stephens spoke about Gov. Mike DeWine’s recent State of the State address, in which the governor called for investment in the state’s Appalachian counties. He said he and representatives from the region met with the governor and first lady for breakfast about the subject.

“The governor said a significant investment in Appalachia is coming,” Stephens said. “The details of that are going to be part of what we do in legislature. We have people who we care about and who we know who do not have running city water. We have people who don’t have sewer. We have the Internet and broadband situation. Even at our house, you have to hold a phone up like this to get two bars for video to download quickly.”

He said one thing they spoke about were transportation issues. He said, when overlaying U.S. Census date with maps of Ohio, population is growing “where there are interstates.”

“A resolution went through Ohio House to encourage the governor to look at ODOT designating the corridor for interstates 73 and 74,” he said. “And what we’re talking about is to have some vision for ODOT extending I-75, roughly the State Route 32 corridor from Clermont County to 75 over to the new Portsmouth bypass to U.S. 52 and right through Lawrence County and over to I-64, taking out traffic lights and trying to do that. I-73 would go roughly up the U.S. 23 corridor to the Portsmouth Bypass then take U.S. 23 north to Columbus from there to Toledo.”

Stephens wrapped up his remarks by expressing his appreciation to the crowd.

“Thank you for allowing me to be in that position,” he said. “I feel like I’m working as hard as I’ve ever worked in politics, and think (my wife) Juli can attest to that.”

He said he hopes to make the most of the time he is allowed as a representative, who are term limited to 10 years in office.

“You only have so much time,” he said. “It’s a quick thing, and you can’t wait to get adjusted.”