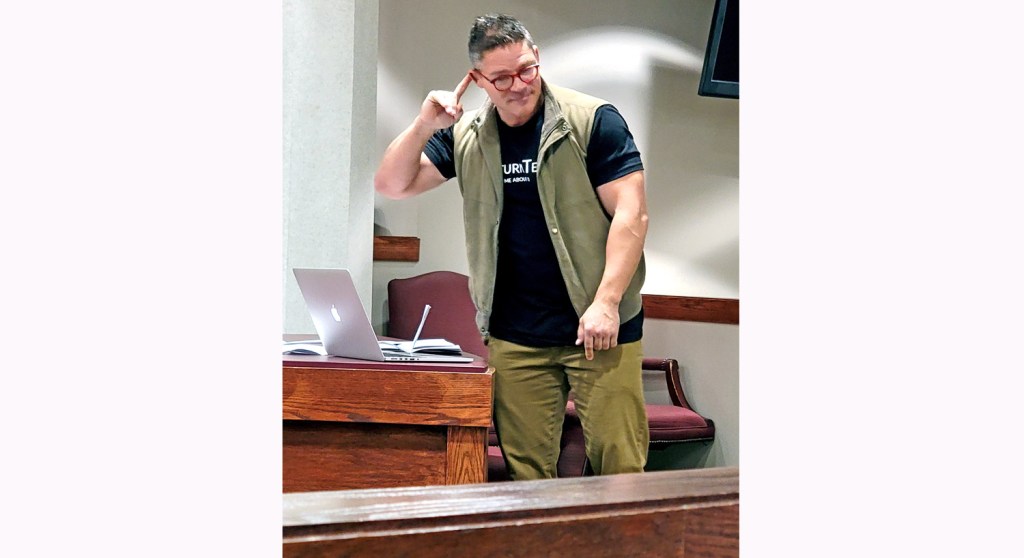 YouTuber pleads not guilty to charges

The YouTuber known as Chille DeCastro, who was arrested for not leaving the Ironton City Center after it closed at 5 p.m. on Tuesday, was in Ironton Municipal Court on Thursday morning to plead on the three charges stemming from the arrest.

As a general rule, the city doesn’t rent the lobby out to private individuals and hasn’t for years. Some public events are held there, like Wizardfest events and the city’s safe trick or treating.

DeCastro, whose legal name is Jose M. DeCastro, who is from West Hollywood, California, has a YouTube channel called Delete Lawz. He was videotaped Thursday by a pair of his followers while he talked to the assembly of people who were there to have their cases heard in court.

He explained that the reason they were all there was because of President Ronald Reagan cutting funds to municipalities and that those municipalities were using the money from the courts instead.

When Terry Jones, a pastor who works with Tri-State Connections, said he would like to pray for everyone there, DeCastro took offense that Jones would use God’s name in connection with the “atrocities” committed by law officers. DeCastro then got on his knees, asking for God’s forgiveness for being a sinner.

The court bailiff told the crowd that DeCastro’s case would be heard first and DeCastro protested against that saying he was no better than anyone else and did not want to go first.

His case was heard first.

Judge Kevin Waldo explained that the hearing was just for a defendant to plead guilty, not guilty or no contest. He explained what the defendant’s rights are in the case, that he could appoint an attorney and that any questions had to be directed to the court if it is relevant to the issues brought up in the arraignment and he would answer those questions.

DeCastro said that at this time he would defend himself in the case.

He then requested to use an audio device to record in court, explaining he did not want to pay the court hundreds of dollars to get a transcript of the proceedings when the record could be altered.

“I see no reason why, in such a public hearing, why I can’t audio record this hearing for transparency for justice,” DeCastro said.

The judge explained that under Ohio law, specifically the Ohio Rules of Superintendence for Courts of Ohio Rule 12(a), that anyone who wishes to record the proceedings has to file a written application with the judge prior to the hearing.

Because DeCastro had not filed a written request, the judge turned down the request.

(The Ironton Tribune filed a request to audio record and take photos with the Ironton Municipal Court on Wednesday and got approval the same day.)

Waldo explained he had researched the matter after office staff told him that DeCastro was interested in recording the hearing.

DeCastro tried to explain to the judge that the reason for qualified immunity for judges was from common law in the 13th and 14th centuries. The judge cut him off telling him that it was irrelevant.

“You haven’t made an application pursuant to the rules of superintendence,” Waldo said.

DeCastro said he just did and Waldo explained that it had to be done in writing.

Waldo then asked DeCastro if he would like to enter a plea on the three charges.

DeCastro instead wanted it to make a matter of record that he wanted to file a replevin motion to get his personal property, a camera, returned to him from the Ironton Police Department, which took it as evidence during DeCastro’s arrest.

“What the replevin motion says is that I have reporter’s privilege and the taking of my phone is unconstitutional,” DeCastro said.

Under Oho law, the replevin motion is to get property returned to the owner that has been wrongfully kept. Waldo said the replevin action wouldn’t be heard on Thursday because it requires the defendant, in the case the Ironton Police Department, to respond in writing.

“The matter being heard today is your arraignment on these three charges,” Waldo said. “I have no authority to grant an immediate order on a matter I haven’t even looked at. You can shake your head all you want, I am not going to grant any emergency order in a case that I haven’t even glanced at.”

Waldo reminded DeCastro that he was there to enter a plea of not guilty, guilty or no contest to the charges since that was the only thing the arraignment was about.

He then entered a plea of not guilty and put in a request for all the body camera footage of the police officers involved in his arrest.

Waldo accepted the plea of not guilty to all charges and assured him all his rights were reserved.

He tried to set a pre-trial hearing on April 21, but DeCastro said he would not be in Ironton on that date and would be in another state for a court matter.

A hearing was set for April 28.

The prosecutor had no opposition for DeCastro’s bond to be continued at $1,500, which DeCastro has already paid to get out of the Lawrence County Jail on Tuesday evening.

Assistant Prosecutor Philip Heald suggested that DeCastro might want to consider the help of an attorney in this criminal case.

“The court has offered an appointed attorney that a person can avail themselves to unless they want to hire an attorney,” Heald said.

“I believe we have very competent attorneys,” Heald said.