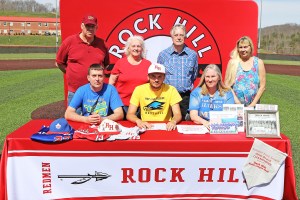 PEDRO — Joe Pierce was looking for a trade school and found a baseball team.

The Rock Hill Redmen senior pitcher and outfielder was looking toward his future education when he got hooked up with the Hocking Technical College Hawks who were just starting a baseball program this spring. 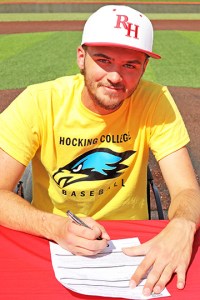 The Hawks are currently in their first season of competition. They are members of the National Junior College Athletic Association and play in the Ohio Community College Athletic Conference which covers teams in Ohio and Indiana.

Pierce plans to major in advance manufacturing, so he began to seek a trade school and came across Hocking Tech and found more than he had expected

“I was looking for a trade school, a type of two-yer deal, and they fit the two-year trade deal and I could play baseball there so it was two positives,” said Pierce.

The Hawks’ head coach Stewart Clinger is planning to look at Pierce primarily as a pitcher according to Pierce.

“I like it being a new program because it’s a fresh start for both sides, not just the kids coming in,” said Pierce. “Plus, (Clinger) coached at Ohio Wesleyan for eight years. He’s been around awhile and it felt like a good spot for me.

“And I like the way Hocking does its classes. You have two to three classes per eight weeks so you only have to focus on three instead of six. I felt it would be more manageable playing a sport.”

Pierce said he’s been playing baseball since he was 5 years old and was excited that he could continue his career.

“It’s been like a second religion,” he said with a chuckle.

Pierce played summer ball in Michigan last summer and he said it was a great experience.

“Playing up there was valuable for me. Even though I’m going to the JUCO school, up there I played with D1, D2, D3 talent, kids you wish you had that type of talent. It was insane,” he said.

“I want to come in, whether it’s bullpen or starter, and dominate whatever I’m doing and take my first big step. I feel ready to pitch at the next level. (Clinger) is looking for me the first year to at least be in the bullpen and see how it go. Right now, the problem they have is pitching. They have a lot of kids who aren’t college-ready,” said Pierce.

“Joe is a hard worker. I”m glad that he’s able to go further than high school to play ball. He works hard during practice and he does whatever we ask him to do. He’s a team player. He loves the game,” said Litteral.

Beside adjusting to the next level, Pierce said he will have to adjust to more extensive travel to play games than he’s experienced in high school.

“The first year they’re trying to keep it more in Ohio and then expand,” said Pierce. “I had four or five schools that offered me, but two were community colleges. One was Hocking and the other Clark State. But Clark State was in the city and Hocking was more by itself.”