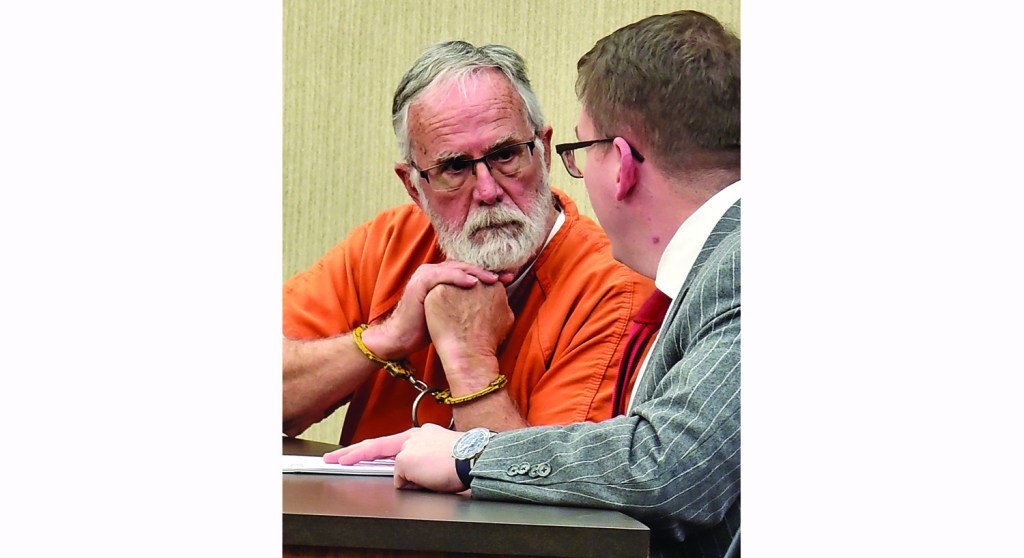 Slack, 68, who was a former owner of Slack and Wallace Funeral Home in South Point until last year, had previously pleaded guilty to 10 counts of first-degree misdemeanor voyeurism and 11 counts of second-degree felony illegal use of a minor or impaired person in nudity-oriented material or performance for secretly recording females that were using the bathroom at the funeral home.

The prison term of 16-20 years was negotiated between the state and Slack’s attorney. All 21 victims gave their approval to the sentence. Slack was given 29 days off his sentence for the number of days he has been held in the Lawrence County Jail.

Judge Andrew Ballard explained the sentencing as that the earliest Slack could be released was in 16 and that the maximum sentence was 20 years. And if Slack gets out of prison, he would have to register as a Tier II sex offender with the sheriff’s office of the county he lived in as well as keep the sheriff’s office updated with email accounts and passwords, internet identifiers, telephone numbers, address and vehicle registration.

Ballard said the shock of cases like dissipate over time.

“It is my hope, here today, as a son, as a husband, as a father, that no ever forgets Mr. Slack,” the judge said. “What you did to these victims and this community is pure evil. The only thing the court takes comfort with is the fact the victims didn’t have to go through the tragedy and the humiliation associated with a trial and having this information brought forth in front of strangers.”

Lawrence County prosecutor Brigham Anderson said he felt 16-20 years was “a good, fair, just sentenced based upon all the facts and information that we have and especially weighing in the victims’ consideration.”

“That would have been very traumatic for them,” Anderson said.

The prosecutor said the videos were made using what is known as “spy cameras,” which have very small lenses and are easy to conceal.

“They were not only in the bathroom, they were in other rooms throughout the facility including an employee breakroom,” Anderson said. “The cameras that captured the images were in a bathroom stall and was able to capture women and young girls in a nude state while using the restroom.”

He added that based on Slack’s age of 68 years old, that this the sentence punishes him adequately for what he’s done and it gives the victims peace of mind that he has admitted his wrongdoing and gives them closure.

Before the sentencing, five of his victims spoke about the broken trust and feeling unsafe using a bathroom in a public place or work because of the secret recordings that Slack had done.

Because of the nature of the crimes, The Ironton Tribune does not publish names of the victims.

Some of the victims were former employees of Slack and they spoke about how they thought he was a good man because of all the help he gave them. A couple victims were customers who had to use the bathroom as they made funeral arrangements for a family member.

One victim told Slack that he had forgiven him, not for his sake but for their sake.

“Through God, I forgive you, but I will never forgive this.”

Another victim told of how she was mortified when the Ohio Attorney General’s Office contacted her and asked if she was the woman in a video and she saw a picture of herself.

Another victim described the situation as living in a nightmare.

“I don’t feel sorry or have any sympathy for you,” she said. “I’m just glad this nightmare is almost over.”

When asked if Slack wished to address the court, Slack said “no.”