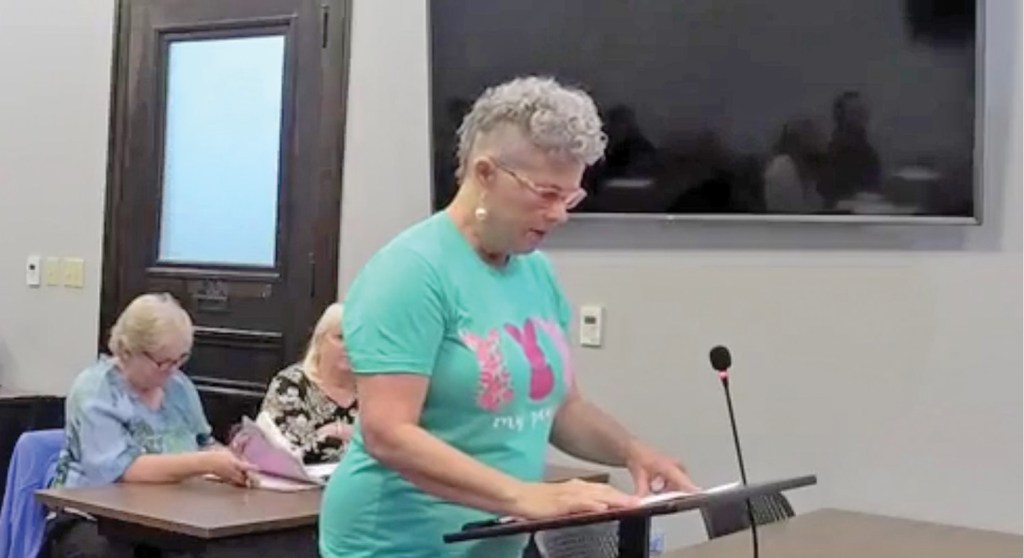 Ironton resident Mary Williams voices her opposition to the former Lombard Elementary School/Open Door School as the site for a new Lawrence County Jail during Tuesday’s meeting of the Lawrence County Commission. (Screenshot)

As was the case at their prior meeting, Tuesday’s regular meeting of the Lawrence County Commission focused on discussion of a potential site for a new Lawrence County Jail.

The county has been considering the site of the former Lombard Elementary School/Open Door School on Lorain Street for the jail, which will be constructed through funds received from the State of Ohio, as well as a half percent sales tax that is on the May 3 primary ballot.

Williams had said at last week’s meeting, and reiterated at this week’s meeting that if the Lombard site was not removed from consideration by March 31, she and others would “campaign vehemently against the sales tax.” 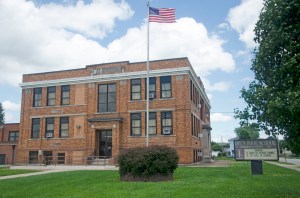 “With a show of hands, whom of you here this morning would like to look out your front, side and back door to our new 200-bed jail facility?” Williams said. “I come in peace, but with a loud mouth, as one of my childhood friend’s mothers so eloquently put it so many years ago.”

Williams then read several statements from South Fifth Street residents in opposition to the Lombard site. They cited the loss of a recreation area at the former school site, which contains a playground, basketball area, greenhouse and is fenced in, as well as its proximity to a church and the Sanctuary of the Ohio Valley nursing home and the impact it could have on property values.

Williams read a statement from a nurse practitioner at the nursing home, who cited concerns for safety of patients, should an escape of inmates occur at the jail.

She asked if anyone had been assigned to remove the covenant from property the county owns on Commerce Drive, a location that she had suggest last week as an alternate site.

“We do not have that power through the legal process,” commission president DeAnna Holliday said.

“It’s not something we can just do,” commissioner Colton Copley said. “No government agency can.”

Holliday said that a legal counsel had been assigned to that, but said “I don’t think it is going anywhere in our timeline.”

Holliday commended Williams for her “advocacy for her community and neighbor” and said the commissioners are “working adamantly at looking at other locations and one looks promising.”

“We feel positive,” she said, adding that they have also been working with Ironton Mayor Sam Cramblit II. “And we may have a solution acceptable to Ironton residents.”

Williams asked for more specifics on the timeline.

“Dear God, DeAnna, we want a jail facility,” she said. “But can you just tell me it may be two more weeks or two more months?”

Holliday said they couldn’t “just say anything” and that there was a legal process involved, and pointed out that the meeting was ending in an executive session to discuss real estate.

“We don’t want to mislead you,” she said. “It is too important to you and to us.”

Copley told Williams that “you have three commissioners listening to what you are saying and working on a solution.”

“We are doing as much as we can to listen to constituents and to provide a solution,” he said.

Williams said she would go back to her neighborhood leaders with the news and that what she heard “sounds very promising.”

“We won’t be relieved until the focus is off the Lombard site,” she said. “but we appreciate it.”

She asked Holliday if any of the other potential sites were “in the middle of a neighborhood.”

Holliday said the majority of the other sites considered would be.

“Someone is always going to be offended,” she said of possible locations, but stated the “most promising” of those sites they are considering is not in a neighborhood.

• Received and filed a resolution for the Fayette Township Trustees stabling a hotel/motel excise tax. Holliday clarified that this was passed by the trustees and was not resolution from the commissioners. 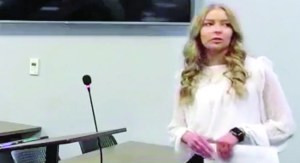 • Heard from Brea Belville and Abigail Wilson, two seniors at Symmes Valley High School who are mentors with the Lawrence Civic Scholars, who discussed their two years in the program.

She said they were taught “design thinking” by a Marshall University professor and then looked for a “pain point” in the government office “or anything not done fantastically by office staff.”

“We used design thinking to address the pain point and create an innovative solution,” Belville said.

Belville also discussed her work with Symmes Valley’s afterschool program and Project Gratitude, created by fellow scholar Conner Waller, in which care packages are created for veterans and first responders “to show appreciation.”