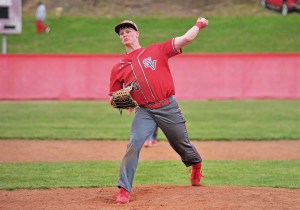 AID — On the old Hee Haw show, Roy Clark and Buck Owens did a musical segment where Owens said, “I’m a pickin,” and Clark would say “And I’m grinnin’.”

When the Symmes Valley Vikings faced the Green Bobcats in a Southern Ohio Conference game on Monday, Brayden Webb was a pitchin’ and Levi Niece was a hittin’.

Webb pitched a 5-inning no-hitter and was 3-for-4 with a triple while Niece went 3-4 and drove in 4 runs.

“Brayden threw the ball well and Levi has been hitting really well. Between the two of them, they were pretty productive,” said Vikings’ coach Chad Renfroe.

The Vikings (4-1, 3-0) got a run in the first when Webb singled, stole second and scored on a hit by Niece.

Three more runs scored in the fourth to make it 8-0.

Webb tripled and Levi Niece singled him home. Aiden Hieronimus walked, an error scored Niece and moved Hieronimus around to third base where he scored on a passed ball.

Symmes Valley got their final 2 runs in the fifth to end the game.

Brammer walked, Webb was safe on an error and they both scored on a hit by Levi Niece.

McComas was 2-3 and both Nick Strow and Logan Justice 1-2 as the Vikings had 10 hits.

Webb struck out 9 and walked one for the only Green baserunner.

The Vikings host Western on Wednesday.