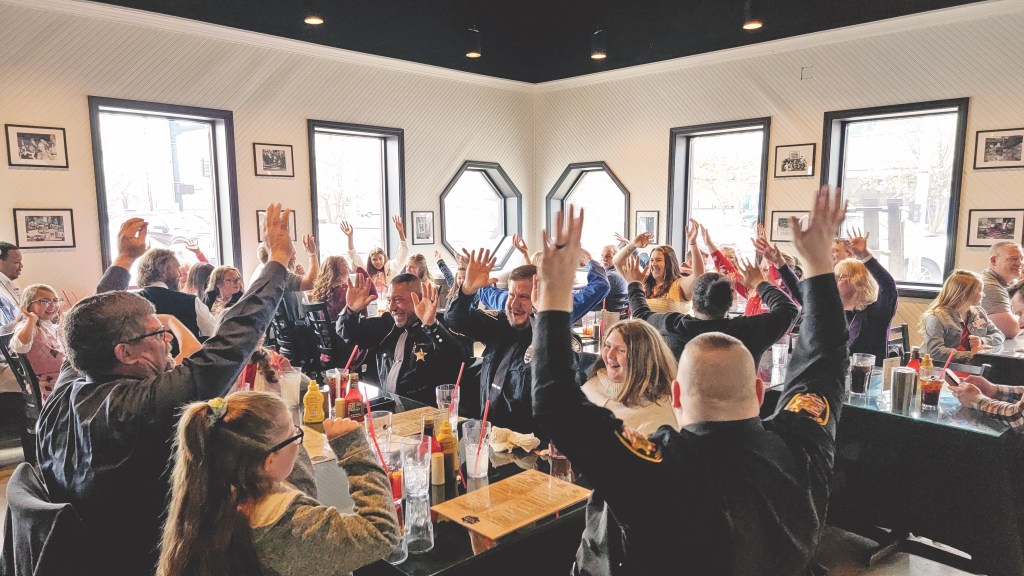 Last Friday, the young women of Ironton Elementary School’s Ladies Academy put their recently acquired social skills to the test during a lunch at Patties and Pints in downtown Ironton.

They dressed up in semi-formal wear and had lunch with men from the community including police officers, the sheriff and deputies, firefighters, businessmen and public officials. The goal was for the students to be confident in social settings and when meeting new people.

Over the past couple weeks, 23 IES students have been part of the afterschool program to learn a variety of basic skills that everyone should have, like cooking, how to use tools, communication skills, being confident, how to budget their money, how to buy food with coupons and how to talk to people. IES also has a similar program for young men called the Gentlemen’s Academy.

Among the attendees was Lawrence County Auditor Paul David Knipp.

“I look for any opportunity to be a positive influence in kids’ lives, I am all about helping the kids,” he said. He added that his invitation came at short notice. “(Lawrence County Clerk of Courts) Mike Patterson asked if I was available, they needed more people. I was and I was happy to come over. It’s been a great time.”

Now, she knows how to make Rice Krispies squares and cheese bread. And has she cooked for her parents yet?

He said IES Assistant Principal David Ashworth and Pastor Rob Hale of the Ironton First Church of the Nazarene reached out to him to be a guest. He said he had been following what IES has been doing with the academies over the past couple of years and attended the first one in 2019.

“It is such an amazing program because when we think about things with a community atmosphere and everyone looking out for each other and all the community looking out for our children, this is the absolute epitome of that,” Ballard said. “Especially bringing community members together to enjoy the time and company of our young people, we normally wouldn’t get to do that.”

One of his lunch companions was Presley Sharp, an IES fourth grader, who said she also went through the academy to learn how to be a lady.

What she took away from the classes was the importance of communicating and learning about others.

“And I really enjoyed doing the art there. It was a good day,” she said. “And we did activities on how to learn interesting things.”

The art segment wasn’t normally on the academy agenda, but Mollie Stevens, the CEO of Impact Prevention, the local program that helped with the Ladies Academy, said they felt it was a necessary break for the students.

“They were in the middle of testing and that is always stressful, so we just decided to have a day of fun,” she said. “We gave them the instruction of painting whatever makes them happy.”

She said that they covered a lot of things in the academy, and she wanted them all to learn that there was nothing in life they couldn’t do.

“If they want something in life, they can work for it and obtain it,” Stevens said. “And I think it’s really important in our internet age that our young people don’t really know how to talk with each other. We want them to show they are listening and how to mirror other people and to be confident.”

Eishia Cecil, an Ironton High School junior, said she agreed to help out because she felt she “wanted to impact little kids and show them that it is okay to be who you are, truly.”

Chasity Cecil, a sophomore at Ironton High School, helped teach “little life things” like how to be a lady and things like being respectful to other people and respecting yourself.

“I think my favorite part was seeing the girls have fun and smiling,” she said. “That just made me happy.”

Although the event was about decorum and using proper social skills in a public setting, it was not entirely a stuffy event.

When Miley Cyrus’ song, “Party in the U.S.A.,” came up on the play list of Impact Prevention’s public officer Eddie Neal, he started waving his arms around in time to the music. It caught on with most everyone joining in.