“The sun’ll come out…” (WITH GALLERY) 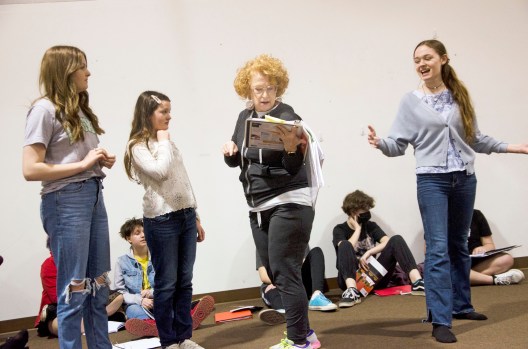 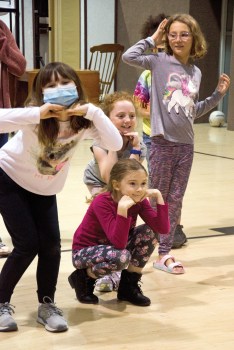 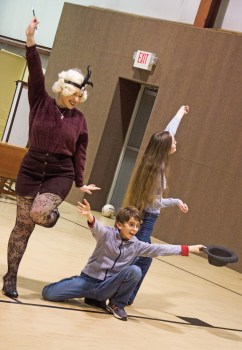 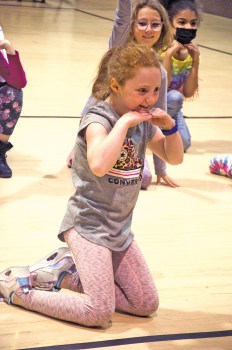 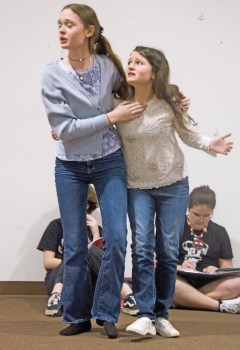 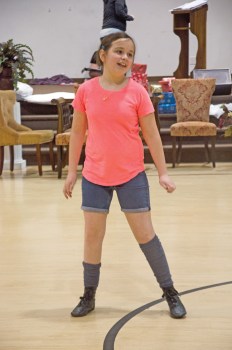 Sophia Abshire sings during a performance of “You’re Never Fully Dressed Without a Smile” on Thursday. (The Ironton Tribune | Heath Harrison) 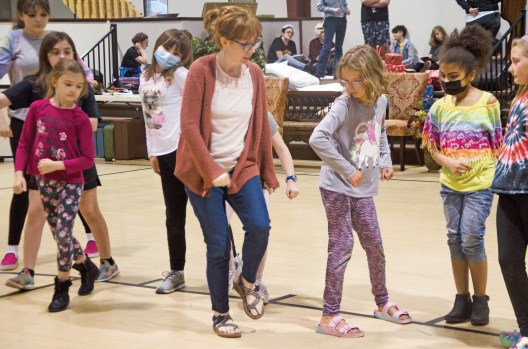 Candice Bunch directs children in a performance of “You’re Never Fully Dressed Without a Smile” during Aspire! Conservatory’s rehearsals for “Annie Jr.” at Beech St. Christian Church in Ashland on Thursday. (The Ironton Tribune | Heath Harrison) 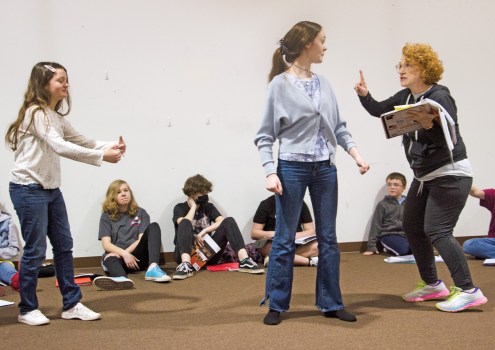 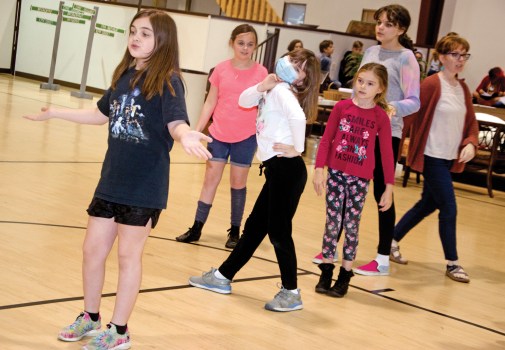 Tegan Bunch, left, and other student performers work through a rehearsal of “You’re Never Fully Dressed Without a Smile” at Beech Street Christian Church in Ashland. The students are preparing for Aspire! Conservatory’s performances of “Annie Jr.” at Raceland High School on April 29 and 30. (The Ironton Tribune | Heath Harrison)

ASHLAND, Ky. — Since January, students at Aspire! Conservatory of Fine & Performing Arts have been taking part in weekly rehearsals for two big shows at the end of the month.

Under the direction of Auretta Hensley, of Ironton, the cast of 30, ranging in age from 7-18, are preparing to perform the musical “Annie Jr.” at 7 p.m. on April 29 and 30 in the John P Stephens Cultural Arts Center at Raceland High School.

On Thursday, the students broke into two groups for rehearsals at Beech Street Christian Church in Ashland, with younger children learning the steps of a dance to “You’re Never Fully Dressed Without a Smile,” while teens rehearsed the dramatic aspects of the show.

The show is condensed version of the 1977 Broadway musical, which is based on cartoonist Harold Gray’s “Little Orphan Annie” comic strip. The show has been adapted twice to film, first in 1982, by legendary director John Huston, then again in 2014 with a primarily African-American cast.

Taking the titular role for the Aspire! Production is Phoebe Smith. She is joined in the cast by her sister, Mary Ann Smith, who portrays Miss Hannigan, the orphan’s adversary who runs the foster home.

Hensley said, in addition to the cast, there are five in the set crew for the show.

Cast members come from across the Tri-State, including one from Ironton, her daughter, Annah Hensley, who portrays Lily St. Regis, a scheming flapper.

Hensley, who has been teaching theater for Aspire! For six years, said the program provides an outlet for many youth that cannot be found elsewhere.

“A lot of the kids have no experience in theater or live performance,” she said. “It’s nice to follow them and see them grow over the semester and to find a niche in theater they don’t have in school.”

During Thursday’s rehearsals, they were given guidance on how to position themselves on the stage for multi-character scenes, with Hensley pointing out how the scene would be framed by the audience and to make sure they do not block one another.

Hensley said theater is beneficial to children in that it teaches “discipline and articulation.”

“And they can analyze a script and see where a character starts and where they end and ask, ‘Why do they do that?’” she said.

She said she has also seen it help introverted children to grow.

“You give them a script and it gives them confidence and, from that, it translates into everyday life,” she said. “They will think, ‘If I can do it on stage as a character, why can’t I do it in every day life?’”

She said the experience also promotes teamwork and makes participants empathetic and supportive of one another.

“They are trying out new things and know they do it in a safe environment,” she said of the atmosphere.

Aspire! Launched about a decade ago and features courses in music, including piano, woodwinds and others, as well as fine arts, for youth, and with some courses at the adult level.

Hensley said those who are interested can visit the nonprofit’s webpage, at https://www.aspireconservatory.com, where a list of courses is posted and a registration form is available.

As for upcoming theater events, she said they will be offering a weeklong day camp this summer, which teaches all aspects of theater, including developing characters, sets, props, stage makeup and lighting.

Hensley said for a typical Aspire! show, the technical end is handled by volunteers, but the camp allows students to learn that side of the field.

She said the theater program has seen exponential growth recently.

“These last two years, it exploded,” she said, noting her average class size has gone from 18-30.  “People are seeing the shows and we are growing, and the response is going very, very well.”

Tickets for the shows can be purchased through the Aspire! Webpage and Facebook page or at the door and are $10 each.

In addition to the performance, there will also be a character breakfast at the church, located at 1672 Beech St. in Ashland, from 9-10:30 a.m. on Saturday, April 23. Hensley said this will consist of a pancake and sausage breakfast and cast members will be in full dress and perform three songs. The event will serve as a fundraiser for the program and is $8 a plate and $5 for children 12 and under.