Can you dig it?!!! Johnson goes from no interest to leading nation in digs 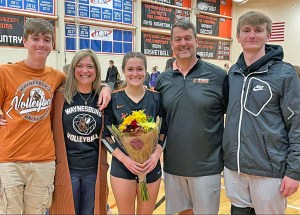 WAYNESBURG, Pa. — The late, great John Lennon once wrote a song for the Let It Be album called “I Dig A Pony.”

Alyson Johnson wasn’t writing a record but she was setting some, and there’s a good chance that if she decided to write a song she might call it “I Dig A Volleyball.” 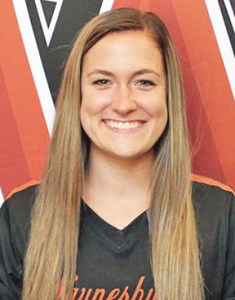 The senior volleyball standout led the country in digs per set for D3 schools and she set school and Presidents’ Athletic Conference records as well as the second highest total ever of digs in a four-set match in NCAA D3 history with 59.

Not bad for someone who didn’t even want to play the sport.

How’s that for a song’s clever ending?

Johnson was in the 8th grade at Ashland Holy Family when Alyson’s friend begged her to play. Her friend had transferred to Holy Family and played volleyball at her previous school.

“I told her I would come out and play just for her not knowing how that would change all my plans for the future,” said Johnson. “I fell in love with the game and never looked back.”

Since Holy Family doesn’t have a high school, Johnson attended St. Joseph High School in Ironton and continued to play. She said her interest in playing at the college level began to develop while playing club ball her junior year.

Johnson played other sports such as tennis and basketball and briefly took up soccer and softball, but sh admitted that volleyball easily became her favorite.

With a love of volleyball and the desire to play at the next level, Johnson got an offer from Wayneburg which was more than four hours away not far across the West Virginia border in Pennsylvania.

Before she even began to make the adjustment to the college game, Johnson had to adjust to something even more important: being away from her family.

Alyson said her family of parents Dwane and Lisa and brothers Jared and Zachary are extremely close-knit.

“I am very close with my family and moving four hours away was a big change. I knew I was going to miss them like crazy, but the volleyball team was quick to become my new family. This allowed the transition to flow more easily,” said Alyson.

Now that she was feeling more comfortable in her new surroundings and less homesick, the new task of adjusting to college volleyball was at hand.

“It definitely was a change when it came to the speed of the game and the opposing talent,” said Alyson who played smaller schools at St. Joseph since there were less than 30 students total in the high school.

“It took some time to get used to it, but if you focus on your fundamentals and reading throughout the gameplay, it is easier to transition.”

Alyson said the travel and practice were an easy adjustment although practices were much more challenging than high school.

But there was one other adjustment that stood our above everything she had mentioned.

“I would say my biggest adjustment was having a new coach. The coach who recruited me left near the end of my senior year of high school, so I was meeting my new coach for the first time when I arrived for preseason my freshman year,” she said.

The coaching carousel is part of college sports and Alyson just made it into another verse for her song. In the meantime, she continued to work on her game and improve.

And improve she did.

This past senior season, Alyson amassed 567 digs playing 86 sets for an average of 6.59 digs per set, nearly a full dig per set above the next player.

Her most memorable performance was on Sept. 28 who Waynesburg came up short in a match against Grove City, but Alyson racked up 59 digs, the most by any player all season in any of the three NCAA divisions.

“The biggest highlight during my athletic career at Waynesburg would be leading the Division 3 in digs per set,” said Alyson.

“Coming in as a freshman, I never set any goals for myself other than to have the chance to play and give 110 percent no matter what. At Division 3 level, we aren’t paid to play any sports, so you are playing out of genuine love for the game. It is all passion and heart that goes into your playing.”

Waynesburg coach is quick to vouch for whatever Alyson said. Grossman said Alyson is not only playing for the love of the game but for her teammates.

“My favorite part about A.J. ending her career as the NCAA D3 statistical champion in digs per set is the fact that she never kept track of her own stats,” said Grossman.

“She showed up every day and gave us her best effort with no excuses. She embodies what it means to be a selfless team player and leader by example.”

Alyson was named to the President’s Athletic Conference second team as well as to the All-Academic team. And although she worked hard, she was quick to give credit to her parents.

“The biggest influences in may life would be my parents. They have always been supportive of all that I do and continued to be my rock and believe in me through all the ups and downs,” she said.

“They are both very strong and driven people, so having them as role models has pushed me to reach for the highest success regardless of where I am starting and to always give 110 percent effort in what I do. Truly, I don’t know what I would do without them.”

But before she could even take another breath, Alyson said there has been one other great influence in her life.

“Faith has played a huge role in may career. I believe that God places everyone where they are supposed to be for a reason. Everything fell into place for me when I was looking at Waynesburg University, so I know He was guiding me to take a nap and move away from home,” said Alyson.

“As my sophomore season was approaching, I still was questioning if this was the path God wanted me on. After talking to some people I looked up to, I decided to stay and play. That year, I became a libero and had a successful season. Shortly after the season, y coach was et go and a new one was hired, so I knew this was another challenge that I would’ve to face.

“I trusted God’s plan in guiding me to continue with my volleyball career and persevere even at my lowest times during injury and challenges. If it wren’t for my faith and God’s strength, I wouldn’t be the person or athlete I am today. He has taught me so many lessons through this sport and I am forever grateful for Him blessing me with the talent and ability to play at the collegiate level.

Sounds like Alyson Johnson has a hit record on her hands.