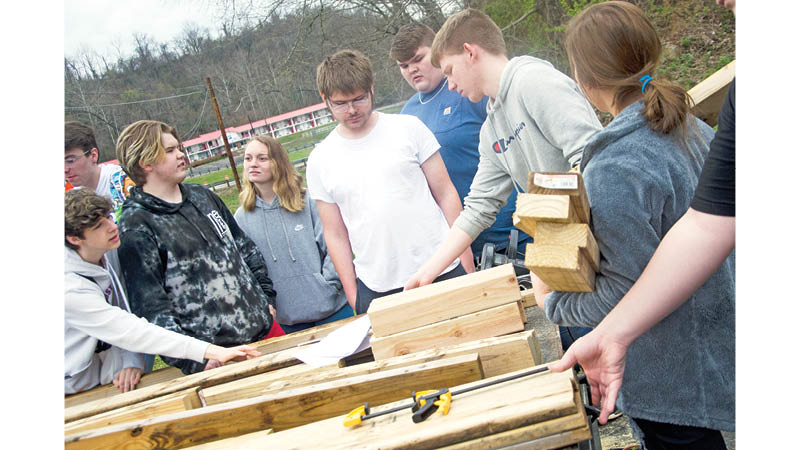 SOUTH POINT — The sound of a power saw could be heard as students gathered on the lot at Tri-State STEM+M Early College High School on Wednesday, working on a project to improve their campus.
Students were holding a build day, creating a set of picnic tables to give them outside seating. Using wood donated from an old pool cover, they repurposed the materials and spent the morning on the project.
Aydan Vissing, Maggie Paiskowski, Drew Fryer and Noah Woods are seniors at the school and served as team leaders for the other grade levels in the effort.
“We usually have Immersion Week at the beginning of the school year,” Fryer said, but said COVID-19 restrictions had curtailed doing such projects at the time.
Woods said it had been a while since they had done such a build day. For construction, he said the school had given them a design with “vague measurements” and that it was up to the group to figure it out and proceed from here.
“We have to finish the thing,” he said, adding they calculated the specifics.
Vissing said he was previously homeschooled and had done a lot of similar work.
“I have good experience working with power tools,” he said.
Paiskowski said it helped to foster cooperation between the students.
“We were able to come together to work as a group,” she said, noting that there had not been a lot of hands-on, group project due to the pandemic.
The students planned to continue on the project on Thursday until completion.
Tri-State STEM+M is a public school and its student body is comprised of those at the high school level pursuing science, technology, engineering, medical and math education.