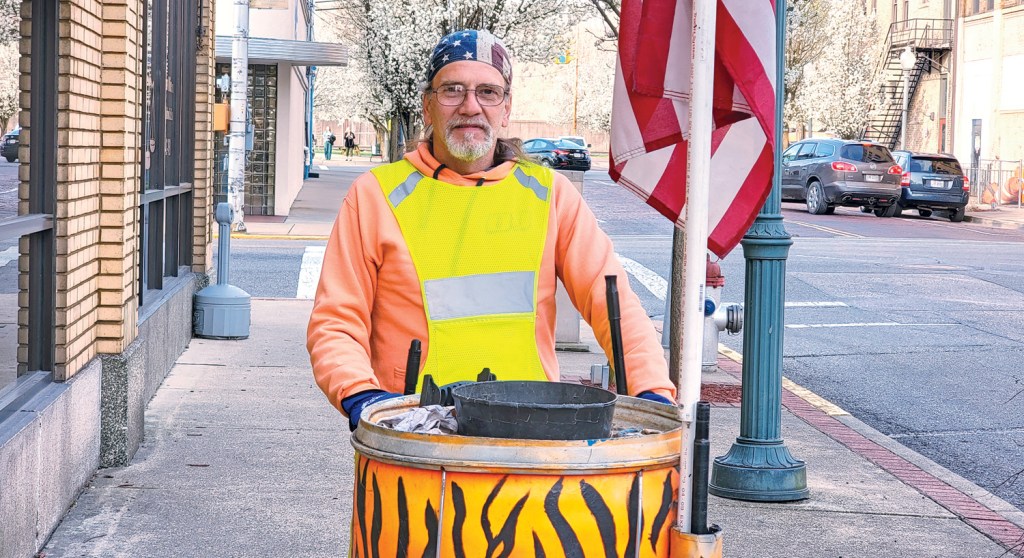 DJ Cohenour, with his tiger-striped organge barrel, is a familiar sight around downtown Ironton. He started cleaning litter off the streets as he walked for exercise after having heart attack three years ago. (The Ironton Tribune | Mark Shaffer)

If you’ve seen a guy walking around Ironton in a high-visibility yellow vest and a wheeled orange barrel with tiger stripes and wondered who he is and what he’s doing, it’s pretty simple.

The guy in question is Ironton resident DJ Cohenour and he is cleaning up trash as part of his daily exercise.

Three years ago, Cohenour had a heart attack and was confined to a wheelchair.

“I made a promise then — if I could walk again, I would give back,” he said.

When he could finally get out of the wheelchair, he was told as part of his rehabilitation he should get exercise.

“They said I should walk for my health, and it took me a while to get past my block,” he said.

As he got stronger and could venture farther, he noticed something that made him unhappy.

“Every time I went out walking, every which way you look, there was trash, there was litter,” he said. “I got annoyed with it but I can’t complain about it if I don’t do something about it.”

He started carrying a bag to pick up the litter but he could easily fill up a bag or two within just a couple blocks. So he wanted something bigger. Thus, he and his son put together a barrel on a wheeled platform. They added PVC poles for an American flag and a place to strap a wireless speaker to so he could listen to some classic rock on his rounds.

And the yellow reflective vest was added so he was easy to spot by drivers. But why is the barrel painted orange with black stripes? To support his favorite team.

He is out just about every day, unless it gets too icy to push the barrel around.

He tries to vary his route to maximize his coverage area.

“I try to do Third Street every day, because that is where everybody comes and goes,” Cohenour said. “Then I pick a street throughout the week, Third, then Fourth, then continue on. I go down to Chestnut and as far down as Hock. Usually I go around the center of town.”

He said he gets a lot of honks of support as he makes his rounds.

“People honk and wave, good people, generous people,” Cohenour said. “Many of them give me money to buy something to drink. You should have seen it at Christmas time, I got so many treats it was overflowing my bag. Great people, great people. I get people thanking me every single day.”

Cohenour said he’s recovered pretty well from his heart attack and he still continues to walk for his health.

He’s kept statistics of how much he’s gathered and how far he’s gone.

“35,000 cigarette butts is what I’ve picked up. And May marks my two-year anniversary and I’ve gone just about 1,000 miles,” Cohenour said.

He and his son have even created a name for his walks — ACIP, which stands for A Cleaner Ironton Project.

“It’s working too,” he said. “Started with just me walking around, but now I’m seeing more and more people picking up trash. It’s catching on.”

Getting his star — Bare honored with Walk of…