Strange, but true: Stealing the body of an American president 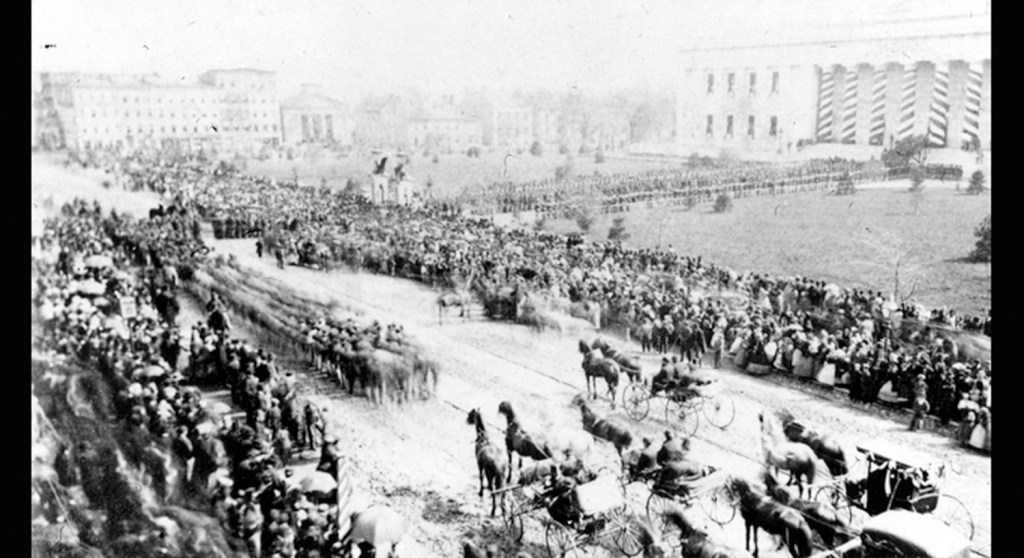 A funeral procession for President Abraham Lincoln in Columbus, one of 12 funerals for the slain president that took place across the nation in 1865 before his body was buried in Illinois. (Public domain)

John Wilkes Booth’s hatred of Abraham Lincoln became so intense that he no longer could contain it.

As a fanatical white supremacist, Booth believed slavery to be “one of the greatest blessings that God ever bestowed upon a nation.”

He recruited Lewis Powell, George Atzerodt, Mary Sue Ratt, Edman Spangler and David Herold to assist him in kidnapping President Lincoln. They would capture and smuggle the president into the Confederacy, where it was hoped he would be the pawn used to convince the north to end the war.

The day of the appointed kidnapping, March 17, 1865, Lincoln was supposed to visit his summer retreat, the Soldiers’ Home, just outside of Washington.

President Lincoln did not travel to the Soldiers’ Home that day. Booth was livid and began consuming more alcohol than usual, drinking a quart of brandy each day. On April 14, 1865, Booth learned Mr. and Mrs. Lincoln would attend Ford’s Theater to watch a play called “Our American Cousin.” He conceived a plan to murder the president that night.

William Henry Crook was one of four plainclothes men assigned to guard the president. On the evening of April 14, 1865, they had their last conversation. Crook begged Lincoln not to go to the theater and asked, if he must attend, would he allow Crook to accompany him. Crook later noted that, as they parted, Lincoln said, “Goodbye, Crook,” not his usual “Good night.”

Fourteen people were invited to accompany the Lincolns to the theater. Fourteen of those people turned him down — mostly because the wives involved could not get along with first lady Mary Todd Lincoln.

John F. Parker was assigned to guard the presidential party. Parker abandoned his post to get a better seat to watch the play. At 10:13 p.m., after a last drink of whiskey, Booth entered the theater. He entered the Presidential Box and placed his tiny derringer behind Lincoln’s left ear and fired the last shot of the recent Civil War.

Charles Augustus Leale was the first doctor to examine Lincoln. He warned that the president could not tolerate the trip to the White House and instructed men to carry Lincoln across Tenth Street to the home of a man named Petersen. He was placed in William Clark’s bed. The president would never regain consciousness. Sixteen men of medicine would tend to Lincoln during his hours of dying.

Lewis Powell failed to kill Secretary Seward, but stabbed him several times and hurt members of his family. Atzerodt got too drunk to even go to Vice President Johnson’s residence. The American leader, whom many called the “greatest man of the nineteenth century,” died at 22 minutes and 30 seconds past 7 a.m. on Saturday morning.

Gen. Ulysses Grant sat alone at the head of the coffin while Robert Lincoln sat at its foot. 600 invited guests — only seven women were present — viewed the catafalque. At dawn on Friday, April 21, 1865, Lincoln’s body left Washington, D.C. in a nine-car funeral train with 300 dignitaries and his son Willie’s casket on board. The train would travel 1,700 miles to Springfield, Illinois.

As the body came into New York City, windows along the funeral route were rented for up to $100 a person. Columbus, Ohio, was the scene of the eighth funeral of the 12 total.

Lincoln’s body was taken to a limestone tomb at Oak Ridge Cemetery to a little space carved into the steep hillside. A million Americans in 11 cities had looked upon his face. 30 times one million Americans had prayed for him, sung for him or watched the progress of the “black funeral train.”

Grave robbing was a money-making profession in 19th century America. Medical schools wanted dead bodies for dissection in anatomy classes and paid cash for the bodies.

A Chicago businessman and lawbreaker, James “Big Jim” Kennally, planned a plot. He was heavily involved in counterfeiting. His engraver, Ben Boyd, had been sent to prison and Kennally wanted Boyd freed. Kennally planned to break into Lincoln’s tomb at night, take his remains, drive his body 200 miles away to the hills of northern Indiana and bury it in the sand. The gang wanted Boyd released and a payment of $200,000 in ransom.

The stealing of Lincoln’s body was to occur on Nov. 7, 1876 – Election Day. Kennally stayed in Chicago and hired Jack Hughes, Terrence Mullen and Lewis Swegles to carry out the dirty deed.

Swegles was a government informant, or “roper,” and was paid $5 a day to infiltrate criminal activities. Hughes, Mullen and Swegles went to Oak Ridge Cemetery in Springfield at 9 p.m. Secret Service agents and some private detectives hid in the darkness a few yards from the tomb.

The three men pried off the lid of the marble vault. The lead-lined box was so heavy that the three men could only raise it 15 inches. As the law officers approached the tomb, one of the men’s guns was accidentally fired. When the Secret Service agents entered the tomb, no one was there!

Within two weeks, Hughes and Mullen were arrested in Chicago. Swegles testified against them and they were sent to prison for one year. There was no law in Illinois for grave robbing. 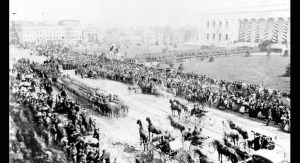 A crowd gathers in Oak Ridge Cemetery on Sept. 26, 1901 as the coffins of President Abraham Lincoln and family are exhumed for a reburial. (Public domain)

It was decided that Lincoln would be buried secretly in a moldy basement below the tomb. Lincoln lay in the basement for more than a decade. In 1901, Lincoln’s body was moved again. The coffins were placed in a new steel box and workers encased them in two tons of concrete.

It was decided to cut a small hole in the box and 22 local citizens were chosen to look inside at Lincoln’s head and body. Among those 22 people who examined Lincoln in 1901, a Springfield resident named Fleetwood Lindley was the last living person to see the face of our 16th president. Lindley died in 1963 at the age of 75.

A mystery remains concerning the murder of Lincoln. Booth’s diary was withheld from the conspirator’s trial. 13 pages were torn out of it. Who tore out the pages and why?

Sarah Bush Johnston Lincoln was too weak to leave her prairie cabin. The president’s stepmother said, “I know’d they’d kill him…”