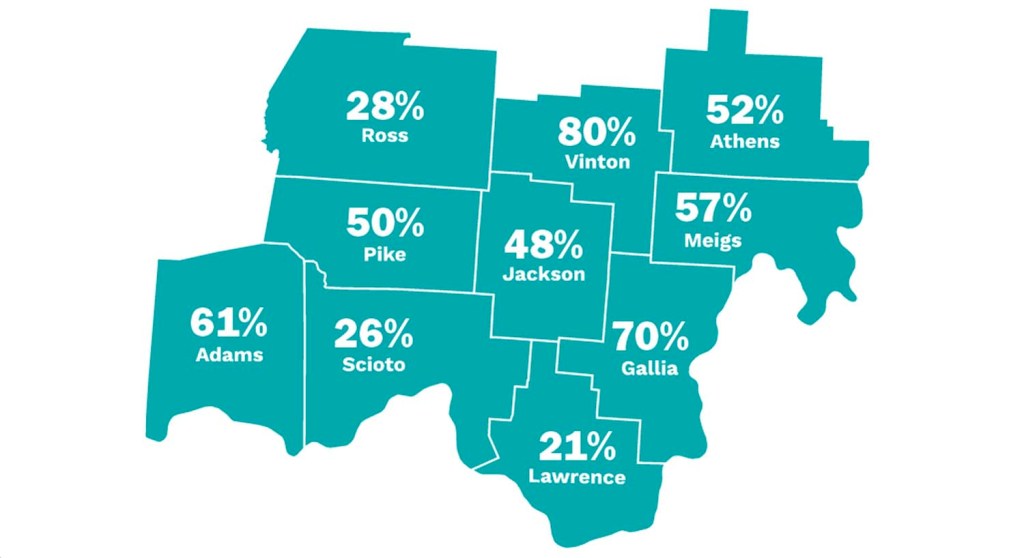 A study from a broadband connectivity group found that 75 percent of Appalachian Ohio is unserved for high-speed service.

According to figures from Connecting Appalachia, a consortium focused on research and advocacy to expand reliable broadband service to all of the households in 34 counties in eastern and southern Ohio, one third of households in Appalachian Ohio have access to U.S. Federal Communications Commission minimum broadband speeds of 25/3 Mbps.

The group said it will cost approximately $2.1 billion to bring fiber optic broadband to every household in the region that is unserved, and that Internet providers will need nearly $1.6 billion in government subsidies to make this possible.

The group, using coverage rating derived from Ookla Speedtest Intelligence data, from February 2020-August 2021, found that, in Lawrence County, 21 percent of households (5,831) fail to meet the FCC minimum and that 3,643 are below 10/1 Mbps.

The group found the largest potential for growth in the northern and southern parts of the county and estimated it would take 500 miles of fiber to bring all homes in the county to the FCC minimum.

“To put this in perspective, $2 billion is what it would cost to build just 100 miles of highway,” the groups said on their website. “In our post-pandemic economy, digital highways are just as important as asphalt and concrete. Now is the time to advocate for a broadband solution that will serve everyone in our region, not just today but for the next 40 years.”

In his recent State of the State Address, Gov. Mike DeWine called on the state to make a significant investment in Appalachian counties. State Rep. Jason Stephens, R-90, whose district covers most of Lawrence County, spoke at the Lawrence County Chamber of Commerce last month and said that the governor had told him and other representatives from the region that such an investment would include broadband service.

Leaders in Lawrence County have long sought to improve service in the region and have stated the COVID-19 pandemic showed how critical the need is for the county, with high-speed service being essential for remote learning for students and for those who worked at home during shutdowns.

For more information on the study and a county-by-county breakdown of numbers, visit www.connectingappalachia.org.